“An outbreak of this”, “epidemic of that”, “protect yourself against a potential pandemic of some horrible sounding disease”. Whether discussing disease in humans or animals, all are terms we hear on the news frequently, but do you know what the differences are between them? In this article, we take a look at the terminology used by epidemiologists and scientists to describe the occurrence and spread of disease.

The causative agents of an outbreak, epidemic, or pandemic may be classed as endemic in a country, like human influenza for example in the UK. Something like Ebola or yellow fever though are not endemic in the UK, any case that might occur would be an exception, likely as a result of infection outside the UK. Diseases that are not endemic in certain areas (i.e. the base level of cases is zero) are normally as a result of environmental factors preventing survival or spread of the transmission vector (as with malaria), geographic isolation from infected areas (as with strangles in Iceland), tight control measures (such as for rabies in the UK) or vaccination and eradication strategies (as with smallpox).

If the endemic level of a disease in a population is persistently high, then It is referred to as hyperendemic.

The term holoendemic refers to a disease with which essentially all individuals of a population are infected. However, it differs from hyperendemic disease in that typically, clinical signs are typically only shown in the younger population when they are first infected after which disease becomes asymptomatic.

What is the difference between endemic and epidemic?

Whilst “endemic” is the baseline level of a disease, an epidemic refers to the, often sudden, rise in the number of cases of a particular disease above the normal endemic level. The number of cases varies according to the disease-causing agent, and the size and type of previous and existing exposure to the agent. The precise definition will depend on the literature in which it is presented, and there is no established threshold for the number of cases, duration of disease or geographical area affected for something to be deemed an epidemic. Seasonal influenza in people is often described as a seasonal epidemic. 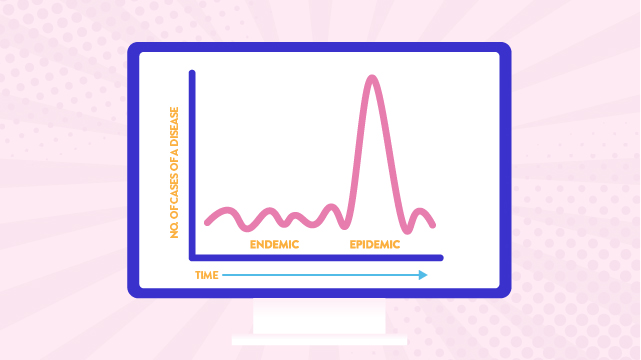 An epidemic of what is typically an endemic disease can arise for a number of reasons. Many factors relating to the host, cause of disease and environment contribute to the normal fine balance, so a shift in any of these may result in spikes in case numbers. Equally, a disease that was previously absent from an area or population may become endemic following an epidemic if these factors change. For example, changes in the environment may mean that a disease vector that previously was unable to survive in an area now can, as seen with malaria. Increased exposure to disease may change the immunological landscape of the host. The disease-causing pathogen may undergo mutations that mean it becomes better adapted to surviving in a new host population, as seen with the spread of zoonotic diseases. The terms “epidemic” and “outbreak” are used interchangeably frequently, even in epidemiological and scientific literature. However for the purposes of risk communication to the general public, it has been proposed that the term “outbreak“ should be used to describe a more limited type of epidemic. If a disease is normally absent from a particular community, then even a single case may be classed as an outbreak. An epidemic is very similar to an outbreak and may often start out as an outbreak, but “epidemic” is typically used in the context of a disease which spreads through a population rapidly. The severe acute respiratory syndrome (SARS) epidemic in 2003 is a typical example.

A pandemic is the worldwide spread of a new disease or a strain of an existing disease to which the majority of the population have no immunity. It is effectively an epidemic on a global scale. The 1918 Spanish flu pandemic, which ripped across the globe following World War I, is a typical example of a pandemic but there are countless examples through history. 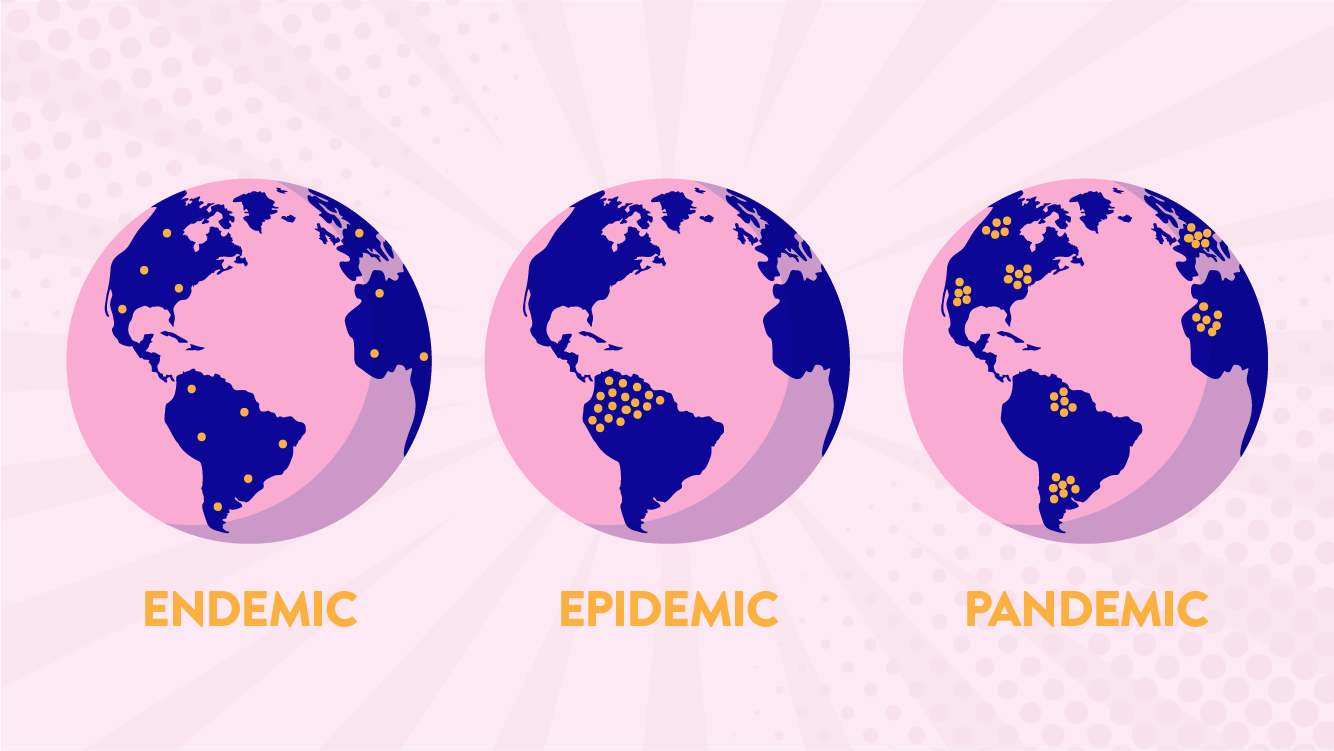 If a disease reaches pandemics levels it can be devastating. Therefore government and health organizations such as the World Health Organization (WHO) and the Centers for Disease Control and Prevention (CDC) have strategies in place for monitoring disease cases. This can facilitate early detection and allow the mobilization of mitigation strategies such as vaccination, screening and movement restrictions. Issues such as the rise of antibiotic resistance, changes to our climate and the ever-increasing international movement of people and animals can make preventing pandemics all the harder.

The below table gives examples of just some previous pandemics.