Today an emergency committee convened in Geneva to discuss whether or not the current outbreak of a novel coronavirus in China should be declared a “public health emergency of international concern.” This comes after the Director-General of the World Health Organization, Dr Tedros Adhanom Ghebreyesus, called an emergency meeting on Monday. Experts will consider the virus’ status and risk to the public to formulate recommendations to manage and limit further spread of the outbreak.

The first cases of this latest outbreak were identified in Wuhan City, Hubei Province, China on December 31, 2019. Initially, cases presented as pneumonia of unknown etiology, but by January 7 2020, the Chinese authorities had confirmed a novel coronavirus (2019-nCoV) as the causative agent. Since then at least 509 cases have been confirmed in China, with proven human-to-human transmission. There have also been cases confirmed in Thailand, Japan, Korea and now the USA, all in people with links to Wuhan in China. Dr Andrew Freedman, Reader in Infectious Diseases / Hon. Consultant Physician, Cardiff University, commented "This first case to be identified outside of Asia is a worrying but not unexpected development. It is likely that further cases will be seen in other countries around the world, including the UK and Europe, in the days and weeks to come. Although person to person spread of the virus has occurred, including from patients to healthcare workers, it is not clear just how contagious it is. This is important in determining the risk of a much larger outbreak developing with spread to people who have not travelled to Wuhan. It is likely that the US and other countries will be considering what further measures are needed to limit the risk of more cases arriving from China. The WHO is monitoring the situation closely and may decide to declare an international public health emergency."

So far, this latest outbreak of a novel coronavirus has claimed the lives of 17 people, but that number is expected to rise. Dr Mike Turner, Director of Science, Wellcome Trust, said "We are in the early stages of this outbreak. There has been some excellent and very speedy work by authorities in China and the research results have been made available to the world very rapidly indeed. This is making it easier to monitor the spread of the disease. Despite which estimates of the size of any outbreak are very difficult to predict at this early stage, but it is clearly still spreading. We are all more concerned than we were three days ago. One of the consequences of a more connected world is that outbreaks have the potential to spread internationally much more rapidly than was the case 50 years ago. Whether health screening at airports makes a useful contribution to reducing spread is a moot point."

What is a coronavirus?

Coronaviruses (CoV) are a large family of viruses that cause illness ranging from the common cold to more severe diseases such as Middle East Respiratory Syndrome (MERS-CoV) and Severe Acute Respiratory Syndrome (SARS-CoV). Other coronaviruses circulate among animals including camels, cats and bats. Occasionally, animal coronaviruses may acquire mutations that enable them to infect people and then spread between people. In 2002-2003, an outbreak of SARS originating in southern China eventually caused 8,098 cases across 37 countries, resulting in 774 deaths. Consequently, in the light of the recent outbreak, there is understandable fear of another such epidemic. 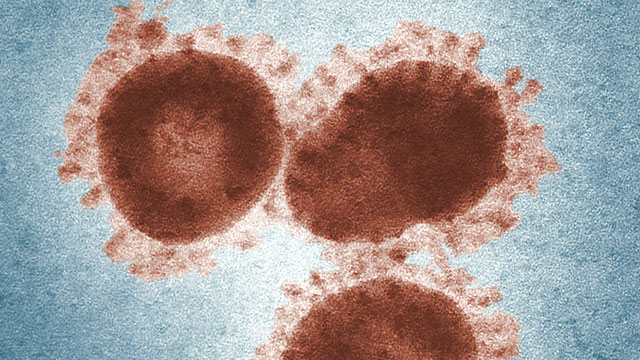 What are the symptoms of infection with this novel coronavirus and what can we do to help prevent further spread of disease?

Primary clinical signs include fever and breathing difficulties, associated with the development of pneumonia, however chills, sore throat and headache have also been described by those affected. Person-to-person spread is thought to occur via respiratory droplets, in a similar way to the spread of influenza. Whilst some individuals may experience only mild clinical signs, there have already been fatalities associated with the infection, mostly in the elderly or those with underlying medical conditions.

Following the identification of the causative agent, a team from the German Center for Infection Research (DZIF) at Charité – Universitätsmedizin Berlin have developed a diagnostic test to detect the novel coronavirus. The test is being made widely available to enable the rapid detection of suspected cases.

Prof David Heymann, Professor of Infectious Disease Epidemiology, London School of Hygiene & Tropical Medicine (LSHTM), commented “Continued reporting of information about persons infected and their clinical outcome from China and countries to which the virus travels will permit a full risk analysis by the WHO. It is known that the virus passes from person to person - more evidence will help determine if it spreads through the air as did SARS, or through close human to human contact as does the MERS coronavirus. It will also indicate the number of hospital workers infected and the extent to which they may have inadvertently caused other infections in patients hospitalized for other reasons and to their families and communities. Finally, information about who is at risk of serious disease and death will indicate whether the risk is to all ages as was with SARS or mostly in the elderly with co-morbidities such as diabetes or chronic lung disease.”

Currently there are no travel restrictions, although indications are that Chinese authorities are poised to enforce travel restriction around Wuhan. With Chinese New Year only days away, a time associated with heightened travel within and out of China, we await to hear the outcome of today's meeting and see how the outbreak continues to unfold.

Read about the updated situation here.

Complete the form below to unlock access to this Audio Article: "Global Alarm Over Spread of Novel Coronavirus"