Karen Steward holds a PhD in molecular microbiology and evolutionary genetics from the University of Cambridge. She moved into science writing in 2017 after over a decade as a research scientist.
Learn about our editorial policies

The prevalence of a disease refers to the proportion of individuals in a population that have a disease at a particular time, sometimes also called the point prevalence. It is therefore a measure of the disease burden. Tracking and forecasting disease prevalence is important to enable effective forward planning of healthcare. This may include ensuring there are sufficient staff rostered on to care for the sick, making sure enough drugs and vaccines are being manufactured and stocked, or updating advice and prevention measures if it becomes apparent that disease prevalence is higher than might be expected.

Knowledge of disease prevalence is also helpful in making a diagnosis. If an individual has a particular set of clinical signs that could fit two conditions, one which is prevalent in that population and the other very rare, then it can help to guide additional testing to make the most likely diagnosis.

Whilst prevalence is the measure of disease in a population, when a disease becomes more common, it is termed prevalent, although there seems to be no specific cut-off for the point at which this happens. Depending on the population being studied however, a disease may be rare in one population but common or “prevalent” in another. Aspects such as genetics, the environment and socio-economic factors are strong influencers here.

Prevalence differs from the incidence of disease, which is the number of new cases that develop within a given time period. When thought of like a bathtub, incidence is the water being added to the bathtub, prevalence is the contents of the bathtub, and cases that recover or die are the water leaving the bathtub via evaporation or down the drain, as represented in the diagram below. 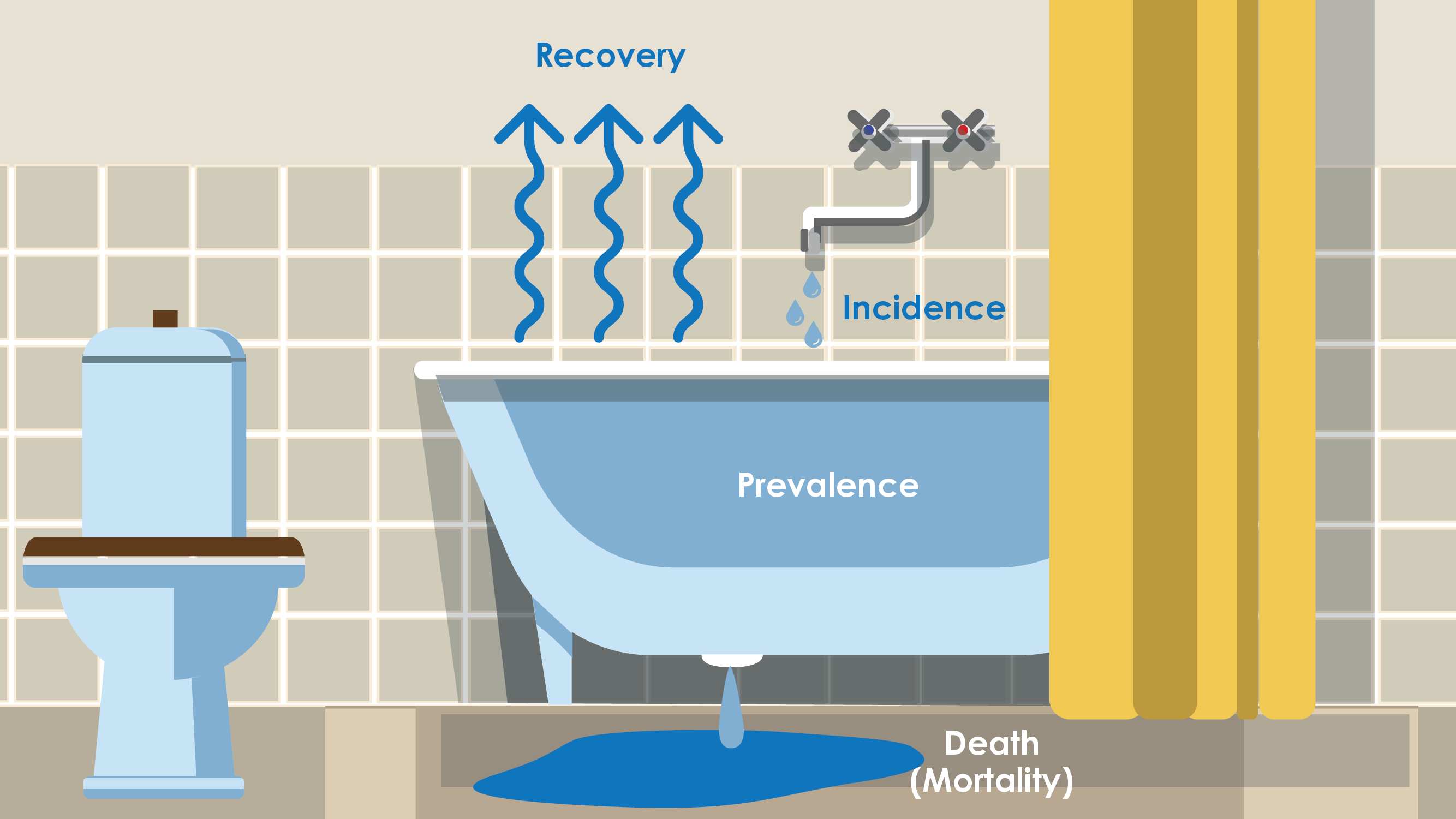 With short lived illness, like the common cold, and diseases that kill those affected swiftly, like rabies, incidence and prevalence tend to go hand in hand. 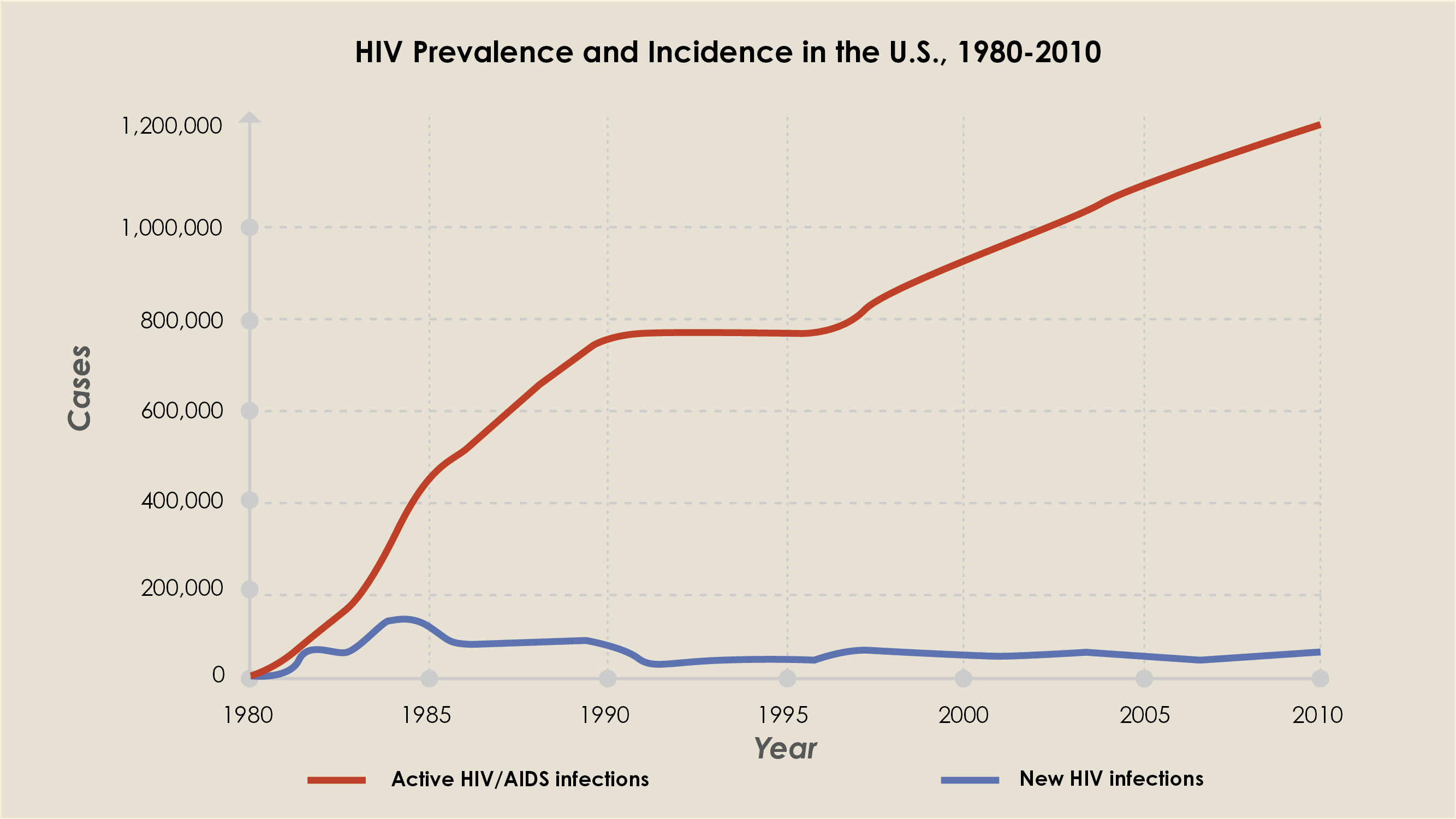 This graph compares the incidence of HIV (the number of new cases reported each year shown in blue) with the prevalence (the total number of cases each year, shown in red). Prevalence and incidence can also be expressed as a rate or proportion for a given population.

It is also possible for a disease to have a high prevalence but low incidence if for example you were to take the case of an infection which is incurable (or long lasting) but does not readily kill, and then develop a highly effective vaccine. The prevalence would still be high due to pre-existing cases, but incidence would be low as the vaccine is preventing new case from occurring. An example of this might be HIV if and when an efficacious vaccine becomes widely available.

Simply put, while incidence measures the number of new cases of a disease in a population during a given period of time, prevalance is the proportion of individuals in a population that have a disease at a particular time, regardless of when they were infected.

This is then often expressed as a rate per number of the population which makes the value more relatable, giving the equation:

As incidence rate values are calculated using the duration of observation of each individual in the study population, it can be a useful measure for monitoring over long time periods as it accounts for individuals joining and leaving the study population. One drawback of this measure, however, is that it therefore assumes the risk of disease for one person over 10 years is the same as 10 people over the course of one year, which is frequently not the case.

For simplicity, however, if for example the incidence rate of influenza is being calculated for a given year, typically the numerator would be the number of reported cases that year in the study population (e.g. the number of reported cases in the UK in 2019) and the denominator would be the size of the population in the middle of the year (e.g. UK population size on July 1 2019) as generally speaking in a situation like this, it provides a good estimate. It is however important to consider factors like this on a case by case basis as estimates like this are not suitable for all models.

In addition to incidence rate, a number of key measures of disease frequency can be calculated. These metrics and the data required for this are summarized in the table below.

Knowing the study population is important for the calculation of incidence and prevalence measures, however, depending on the question you are looking to answer the population may be defined in many different ways. For example, it may be the total population of a country, those of a particular demographic or individuals or particular species in a given community or location, amongst others.

Complete the form below to unlock access to this Audio Article: "Incidence vs Prevalence"