With the opportunity for space travel steadily growing, and for trips of longer duration, it is becoming increasingly important to understand what happens to cells in the human body in microgravity. Studying how cells behave in space could have wide implications for the health and safety of both astronauts and space tourists of the future.

Headed by University of Zurich scientists Professor Oliver Ullrich and Dr. Cora Thiel, experiments to directly measure how cells respond and adapt to changes in gravity were recently conducted aboard the ISS.1 Amazingly, the cells adapted to zero gravity in just 42 seconds, offering hope that our bodies may be able to cope with space travel better than previously thought.

To learn more about the experiments, and the challenges of designing and carrying out research such as this in space, we spoke to Professor Ullrich.

AM: Can you give us an overview of your lab’s main research directions?

OU: Gravity has been a constant factor throughout the evolution of life on Earth, and played an important role for the architecture and morphology of all biological systems. It can therefore be assumed that abrupt changes of the gravitational force have an impact on the function of living organisms. We are investigating, if and how cellular and molecular functions respond and adapt to gravitational changes or if they strictly depend on Earth’s gravity. We are aiming to understand how a gravitational force is being transduced into a cellular reaction, how gravity is connected to molecular and cellular homeostasis and function and finally to obtain fundamental data for an appropriate risk assessment of long-term space missions. 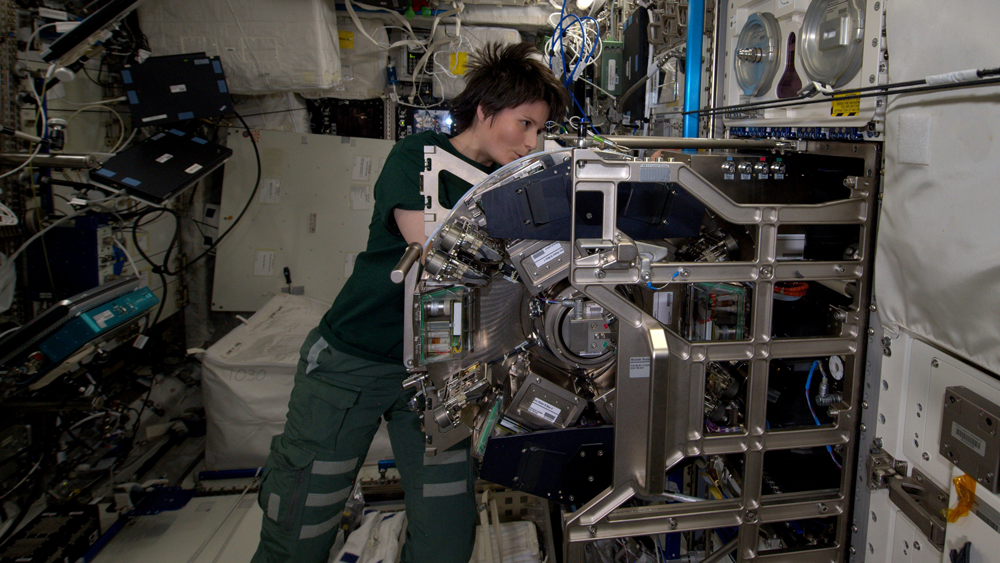 AM: What challenges did you face when designing experiments to be conducted in space?

It takes a very long time to prepare for a space experiment. First of all, after the development of the project idea, the preliminary experiments and tests and the selection of the project proposal in highly competitive calls of experiments, all requirements have to be discussed and coordinated with the involved space agencies and payload developer. Numerous tests follow to check, develop and approve the hardware. During the entire development process, the biological system must be adapted to the hardware changes in many series of tests and checked again and again, and finally standardized and validated. Always included are redundant procedures, reserves, plan B and C procedures, everything tested in every detail. The entire team is very well trained and has to work with precision and discipline over many years.

The big difference between a regular laboratory experiment and a space experiment is the huge amount of testing, optimization, standardization, logistics and in the extraordinary large team size. Our experiment was prepared partially at the University of Zurich and partially at the Space Life Science Labs of the Kennedy Space Center and therefore, samples, chemicals and hardware had to be transported by airplane between the two continents.

In spite of all the hardships, this kind of work is very rewarding. We are entering an entirely new world, the world of a new gravity environment different from Earth. Research in microgravity is to explore and to discover, to enter new worlds and to go far beyond known boundaries. 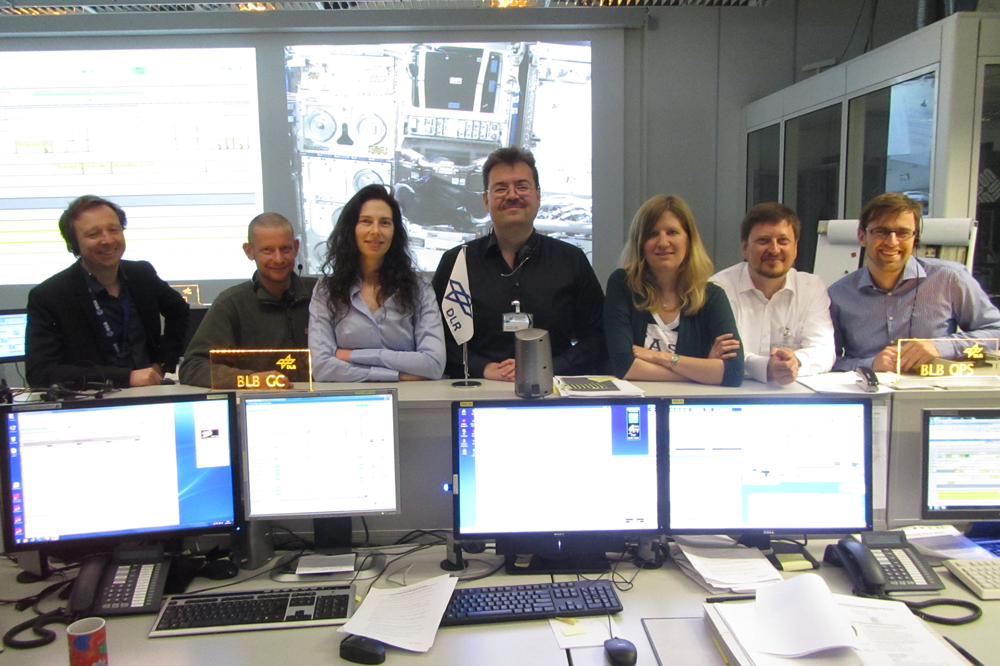 AM: Can you tell us about the TRIPLE LUX A experiment?

OU: The experiment TRIPLE LUX A was developed for and performed in the BIOLAB laboratory of the ISS COLUMBUS module and allowed for the first time the direct measurement of a cellular function in real time and on orbit. We transported mammalian macrophages (NR8383 rat alveolar macrophages) in an ultra-deep frozen state from Zurich to the ISS, thawed and recovered them in the BIOLAB on orbit and measured the oxidative burst reaction while being exposed to a centrifuge regime of internal 0g and 1g controls and step-wise increase or decrease of the gravitational force in four independent experiments. All data recorded were directly transmitted to the BIOLAB ground control at the German Aerospace Center DLR in Cologne, followed in real time and analysed afterwards. 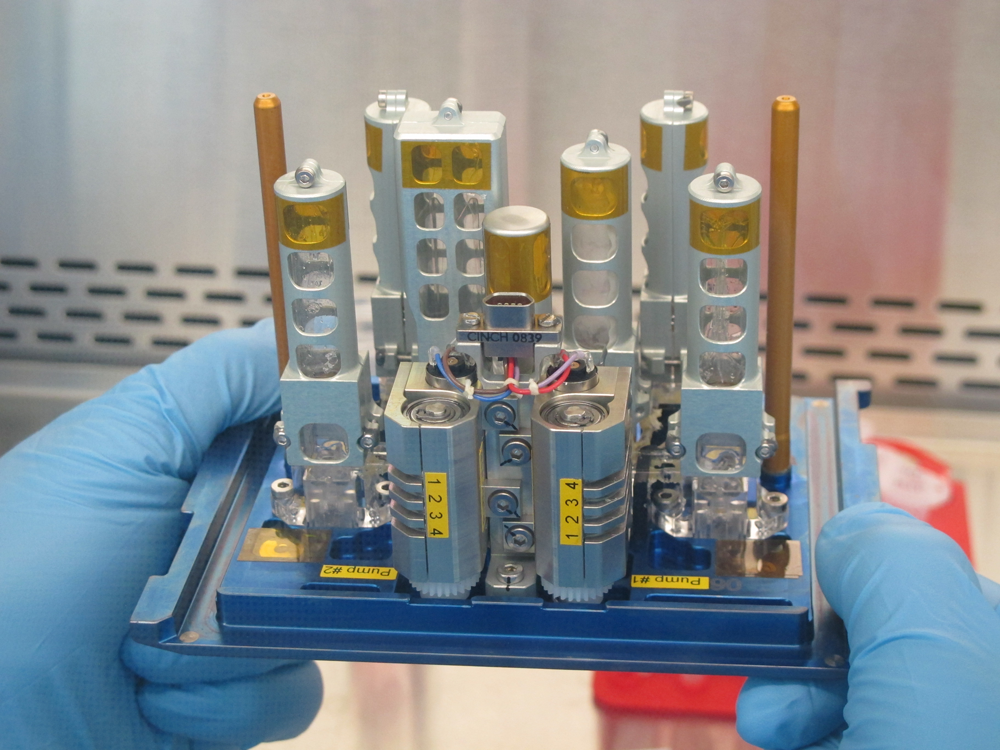 AM: Why was the oxidative burst reaction chosen as a measurement?

We choose the oxidative burst reaction because 1.) it represents one of the key elements in the innate immune response, the most important barrier against microbes invading the body. 2.) it represents an evolutionary very ancient part of the immune system, present from the earliest stages of evolution in every type of multicellular life and 3.) our previous experiments demonstrated that the oxidative burst reaction is inhibited in microgravity during parabolic flight experiments, justifying to analyse threshold levels of gravity sensitivity adaptation effects in a much more complex ISS experiment.

AM: Why were immune cells chosen? Would you expect the same adaptability across other cell types? What are the wider implications of these results, and what does this mean for space travel?

OU: In our study, we found a really surprising ultra-rapid adaptation in one mammalian cell type, the macrophages. That proves the general existence of ultra-fast adaption responses and hints to the possibility that it appears in other cell types too. Macrophages are of crucial importance for the entire organism. Macrophages are not only important for the elimination of pathogens, they are also required for the clearance of billions of apoptotic cells every day and therefore for the constant and balanced regeneration and homeostasis of our body's cellular architecture. Therefore, the adaptation potential of one tiny cell type could lead to huge beneficial consequence for the entire organism.

The entire human organism is an unbelievable complex system, which responds and adapts to a microgravity environment at different levels and with different time courses. Our experiences are that a huge number of molecular reactions are occurring surprisingly fast, whereas systemic effects such as the musculoskeletal system need longer reaction times.

Because gravity has been constant throughout the history of Earth and evolution of life, no pre-set adaptation program can be expected and the cellular response may therefore be less organized than other adaptation processes. Indeed, so many in vitro studies demonstrated extensive alterations in almost every cellular and molecular aspect which were examined in more detail. In contrast, long-term studies with animals and humans are completely lacking this dramatic picture of short-term cellular effects, which indicates a very efficient adaptation process. We assume that the human body and its cells are equipped with a robust and efficient adaptation potential when challenged with low gravitational environments.

We could speculate that the more complex a multicellular system is, the more it depends on the existence of a certain level of gravitational force. The force of gravity on Earth could probably represent a fundamental driving force for the evolution of higher organisms. 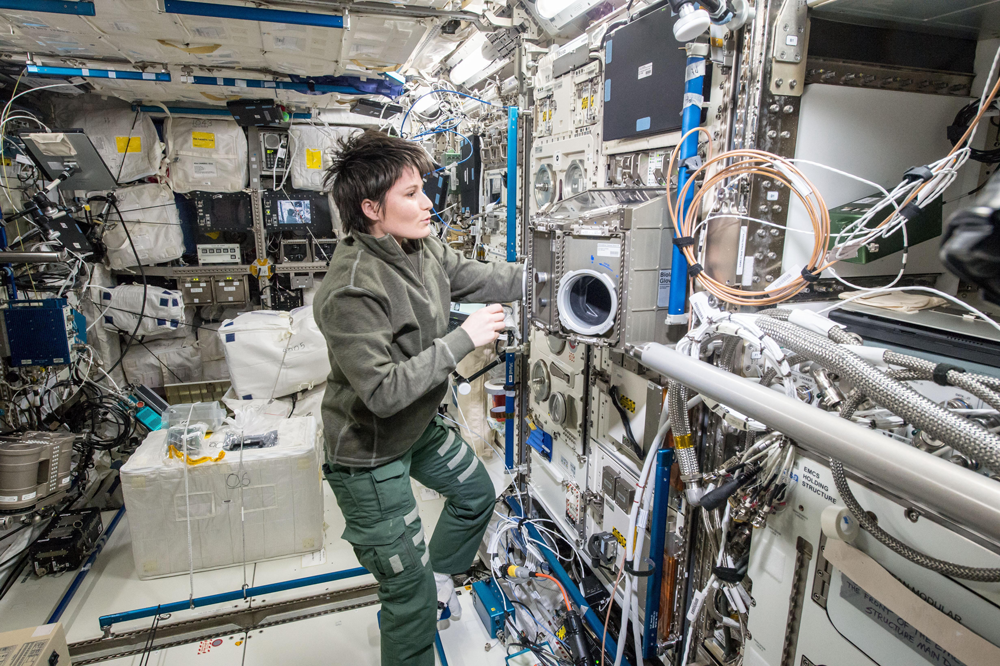 AM: What could be responsible for the rapid adaptability of the cells to microgravity?

OU: In our experiment, we were able to provide for the first time, direct evidence of cellular sensitivity to gravity through real-time on orbit measurements using an experiment system, in which all factors except gravity were constant. The molecular mechanisms with which oxidative burst reacts and adapts to a new gravitational environment are still unknown. The rapid reaction and adaptation of oxidative burst reaction suggests a direct effect at the level of the membrane-bound NADPH oxidase complex, which is closely associated with cytoskeletal dynamics and linked to areas where tension and compression sensitivity are located. Key signal proteins might be involved in this process. So far we are technically not able to investigate the interaction of these molecules and molecule complexes on board the ISS in real-time. Our goal is to investigate these dynamic reactions in live-imaging studies as soon as this technology becomes operational for on-orbit experiments at ISS.

AM: Can you tell us about future work that you have planned?

OU: Our next ISS experiments in the German and European Space Research Program will clarify whether and to which extent gravity is involved in epigenetic gene regulation and cell function and how cells adapt to the new situation. Our experiments will allow us to identify microgravity-induced specific gene expression regulation at the level of every single gene. Importantly, cellular adaptation to the microgravity environment appears to include very complex changes of cellular and molecular mechanisms. It can only be studied and understood in dynamic measurements. Therefore in further experiments we plan to follow our concept of dynamic on-orbit monitoring and to pin down at least one direct molecular pathway which links gravitational force and cell function.
Further information about Professor Ullrich and his work can be found here.
Oliver Ullrich was speaking to Anna MacDonald, Editor for Technology Networks.
1. Thiel, C. S., Zélicourt, D. D., Tauber, S., Adrian, A., Franz, M., Simmet, D. M., . . . Ullrich, O. (2017). Rapid adaptation to microgravity in mammalian macrophage cells. Scientific Reports, 7(1). doi:10.1038/s41598-017-00119-6
Related Topics
Infectious Diseases
The Immune System
Meet the Author