Microphysiological systems (MPS), also commonly referred to as organ-on-a-chip or body-on-a-chip technologies, have gained considerable attention in recent years. They provide a more physiologically relevant setting compared to static two-dimensional cell culture assays or animal models, as they more closely recapitulate human physiology and the downstream effects of drugs on multiple tissues. The development of MPS technologies has been driven by advances in several areas – 3D cell culture techniques, microfluidics, tissue engineering and bioprinting – enabling the creation of various key components. In this article, we highlight advances in the field that have been instrumental to the development of MPS, as well as key applications and future opportunities.

“There are many organ-on-a-chip devices, all with different properties,” explains Mehmet R. Dokmeci, associate professor at the Terasaki Institute. Dokmeci’s research includes developing microfluidic systems for organ-on-a-chip applications and 3D bioprinting. He has more than 10 years of experience in tissue engineering, designing nanoscale systems and biosensors.

Dokmeci draws on his first-hand experience developing a liver-on-a-chip platform to provide examples of the various components required to build MPS: “[The device] would need a pump (syringe or peristaltic pump to move the fluids), a microfluidic device (also could be called a microbioreactor), and then cells or cells within biomaterials to be placed into the microfluidic chip.” Dokmeci and colleagues created the platform to support the long-term culture of bioprinted hepatic spheroids – spherical aggregates of cells – as a tool for drug toxicity testing. The bioreactor component of the device was designed to enable it to be interfaced with a bioprinter to fabricate the hepatic spheroids, which were encapsulated within a hydrogel.

Transitioning from organ-on-a-chip to body-on-a-chip

In a separate study, published in PNAS, Dokmeci and colleagues described their work developing a multisensor-integrated multi-organ-on-a-chip platform to address the growing interest in, and need for, MPS.

“Animal models, even though the current gold standard, fail to capture human physiology. As such many drug candidates fail in the clinic,”

The team designed the platform to include real-time sensors, meaning biophysical and biochemical parameters could be monitored in situ. It was comprised of a central flow control breadboard, connected to various “modules” such as microbioreactors to house the various organoids, a reservoir, bubble trap, physical sensors and electrochemical biosensors. The dynamic setup meant that individual modules could be replaced as and when required, without having to disassemble the entire platform. How Far Can Organs-on-Chips Go On Their Own?

END_OF_DOCUMENT_TOKEN_TO_BE_REPLACED

However, building a device that encompasses several tissue constructs to produce an interconnected multi-organ environment is no easy feat, as Dokmeci explains, “Finding a universal media that satisfies the needs of multiple cells or organs is one of the main challenges.”

MPS allow researchers to reproduce complex multi-organ interactions, helping them to answer specific research questions. To date, MPS have been used for several applications. Here we highlight five key areas of research and explore a few in more detail. 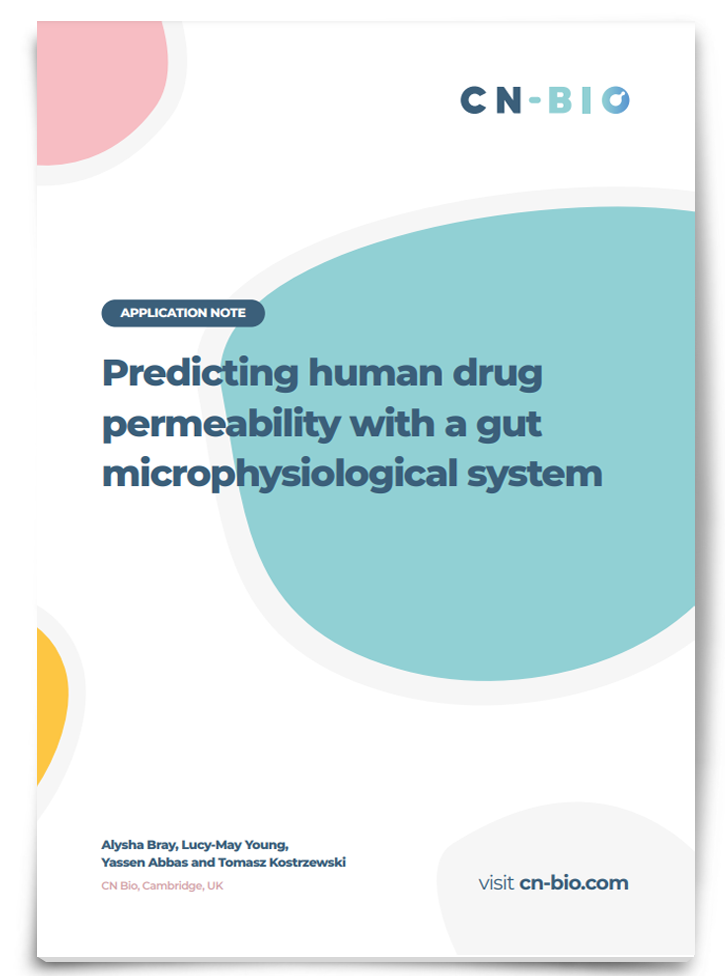 In recent years, there have been efforts to improve the in vitro models used in preclinical drug development and disease research. In particular the use of microphysiological systems (MPS), also sometimes referred to as organ-on-a-chip (OOC) technologies, has become more widespread. Download this app note to discover a gut MPS that has physiologically relevant morphology, reduced barrier integrity and mucus expression. It can also be used to predict drug permeability across an intestinal barrier.

Prof. Anthony Atala, director of the Wake Forest Institute for Regenerative Medicine (WFIRM) and colleagues have developed a novel MPS comprised of multiple tissue organoid types to enable the in vitro screening of drug candidates. “We have developed a ‘body-on-a-chip’ system that allows us to engineer an advanced [three-dimensional] (3D) model of the human body using a system of chips and microfluidic devices, creating a structure in which to place the human tissue equivalents, also known as organoids,” explains Atala.

Atala describes that by using MPS, it is possible to “improve drug effectiveness and safety, reduce time, costs and risks, and accelerate personalized medicine.”

To prevent loss of the drug compounds, the team chose to assemble their MPS using polymethyl methacrylate (PMMA) – rather than polydimethylsiloxane (PDMS). While PDMS has been widely used to build microfluidic chips until now, it can cause small molecules to be absorbed into the walls of the chip, reducing the “free” concentration of drug within the circulated medium, affecting drug bioavailability.

Atala explains that to create the MPS they employed strategies like those used to implant engineered tissues in patients. “We first determine the major cell types present in the specific organ, and we use normal cells in the same proportions as present in humans. We also use the tissue-specific ‘glue’ that holds cells together, the extracellular matrix,” he says. The team then combined the different organoids of interest into a single system by immobilizing them in hydrogels within individual chambers.

In a study published in Biofabrication, Atala and colleagues first tested the ability of 3D primary human liver organoids and 3D iPSC-derived cardiac organoids to assess toxicity by using them to screen a panel of approved drugs that had been found to cause adverse effects, specifically in the liver and heart, in human patients. The drugs have subsequently been recalled by the US Food and Drug Administration (FDA).

“Although initially the manufacturers tested these drugs in cell culture, animals and human clinical trials, no toxicity was noted until the drugs were used widely in humans, when it was discovered that these drugs could actually be harmful to people,” notes Atala. The organoids were able to detect toxicity at a human-relevant dose and reflect human physiology, replicating the damage seen in “real-world” patients.

In the same study, the team assembled the WFIRM MPS, comprising numerous organoid types including the abovementioned liver and cardiac organoids, as well as vascular, lung, testis and colon or brain and set out to assess its ability to emulate in vivo drug toxicity. Live/dead staining and macro-confocal microscopy were used to confirm the viability of the organoid chip for 28 days. To demonstrate the system’s dependency on liver metabolism, the team compared two multi-organ chips – one with the liver organoid and one without. The team screened anticancer prodrugs using each of the systems.

The team opted to test the two MPS using prodrugs because they have little to no activity until the “parent” compound is broken down into pharmacologically active metabolites. As the liver is the primary site for metabolism, in its absence, the prodrug cannot be broken down to produce the “toxic” metabolite required to kill the cancer cells. This scenario was mirrored using the WFIRM MPS – in the presence of the liver organoid, the prodrug was metabolized resulting in the cytotoxicity of several downstream organoids. However, for the MPS without the liver organoid, no downstream toxicity was observed.

Versatility of the WFIRM microphysiological system

According to Atala, the organoids can be used separately, or together in various configurations and quantities – for example 3, 6 or 12 organoids can be included on a single chip, either in parallel, or in series.

Atala elaborates, “We can therefore test many parameters, such as the effects of one drug on a specific organ, and how the drug gets metabolized and processed, or its bystander effects on other organs. The system, depending on how many tissues it uses, can be designed to fit an area about the size of a matchbox.”

As a personalized medicine platform, MPS enable a new standard of care as they can be tailored to reflect individual physiology. By creating interlinked patient-derived organoids it is possible to test the efficacy and safety of treatments before subjecting patients to the therapy in “real life”.

“This is one of the main promises of the organ-on-a-chip field – being able to ‘borrow’ cells from patients and test the drugs on individual patients beforehand,” explains Dokmeci.

“The invention of induced pluripotent stem cells (iPSCs) has helped to expedite research in this field,” he adds. Personalized MPS can be created using blood samples, primary human tissue – and cells derived from iPSCs, as Dokmeci emphasized above.

“The ability to conduct studies with cells borrowed from many patients of different backgrounds holds the promise to reduce or eliminate drug recalls, some of which are fatal,”

By fine-tuning the parameters of the cell culture microenvironment based on a patient’s health information it is possible to individualize the MPS further. While personalized MPS appear to offer great potential, challenges remain – primarily in relation to patient sample access and permission to use the patient’s health data.

Interest in the use of MPS to investigate lung physiology and disease states has increased in the past year or so – this is almost certainly due to the emergence of SARS-CoV-2 and the subsequent urgent need to discover new drugs and repurpose existing ones to combat COVID-19 disease.

“There are efforts by different groups in this area,” explains Prof. Nureddin Ashammakhi, ex-associate director of the Center for Minimally Invasive Therapeutics, UCLA. Ashammakhi’s research is focused on 3D bioprinting and the development of organ-on-a-chip models for regenerative and personalized medicine.

In a recent study, published in Bio-Design and Manufacturing, Ashammakhi and colleagues reviewed the development of lung MPS to model the pathology of COVID-19. According to Ashammakhi, when designing a lung MPS it is important to mirror the organ’s unique organization and function.

“This is achieved by designing a chip with one chamber for air, representing alveolus and one chamber lined with endothelial cells, representing the blood vessel. The two chambers are separated by a porous membrane that allows the movement of molecules between the two sides,” says Ashammakhi.

It is even possible to emulate the motion of in vivo breathing by applying a vacuum to chambers surrounding the epithelial–capillary membrane, causing it to stretch. This is an important element as stress has been shown to influence permeability of the membrane and the release of reactive oxygen species, as well as other molecules.

“COVID-19 pathology can be organized into the following stages: SARS-CoV-2 viral entry by the ACE2 receptor; inflammation or malfunction of the innate immune response; coagulopathy or clotting dysregulation; edema or swelling and fluid accumulation; and fibrosis or scarring through the buildup of fibrotic connective tissue,” explains Ashammakhi.

While there are surely benefits to assessing COVID-19 using a single lung-on-a-chip device, as Ashammakhi eludes above, the systemic nature of the disease means that a multi-organ MPS would be needed to reflect secondary and systemic effects of the drugs being tested. “The inclusion of other cell types such as immune cells is also of utmost importance in developing relevant models especially for infection-related studies,” he stresses.

MPS are continuing to demonstrate their value across numerous applications. Their development has required close collaboration across numerous disciplines and technological innovations – such as artificial intelligence (AI) – will only help to advance the capabilities of these systems further.

“AI is very important in this sense, it can make the big data obtained from multiple MPS chips, for a multitude of variables comprehendible – relations [can be] identified and conclusions can be drawn,” says Ashammakhi.
Meet The Author