Bacteriophage (phage) are viruses that specifically infect bacteria. They have a two-phase lifecycle, residing in a dormant state within the host genome (lysogenic cycle) or hijacking the host cellular machinery for their own replication (lytic cycle). Here we will explore the important steps of the lytic cycle.

What is the lytic cycle?

Whilst the ultimate outcome of the lytic cycle is production of new phage progeny and death of the host bacterial cell, this is a multistep process involving precise coordination of gene transcription and physical processes. The phage must identify a susceptible and suitable host bacterial cell to which it is able to attach. Following introduction of phage genetic material into the cell, the host genome is destroyed, and the phage utilizes the host cellular machinery to make copies of its own genome and synthesize the structural components. New phage are assembled before the host cell finally lyses and the phage progeny released into the surrounding environment to find new target cells. 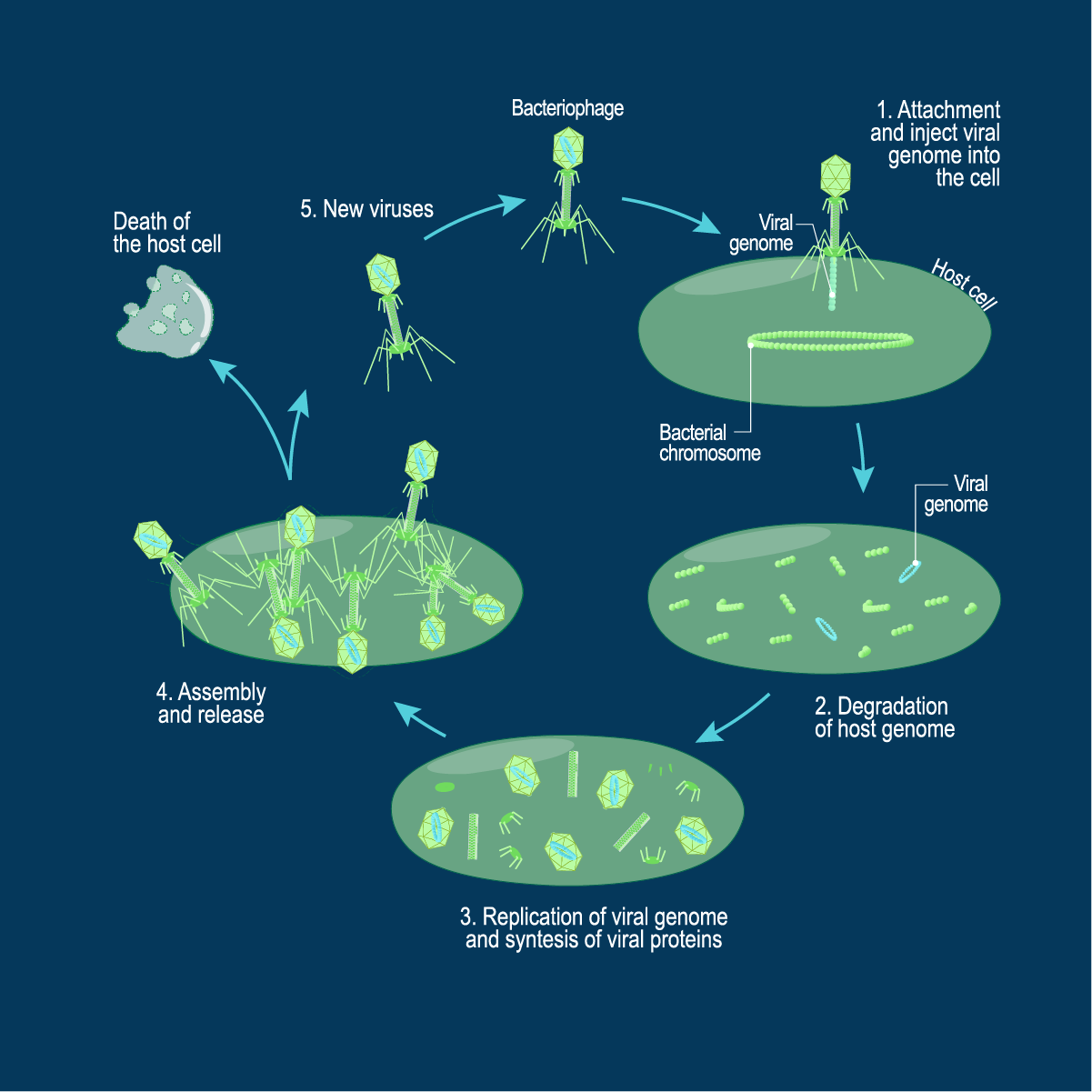 In order to enter a host bacterial cell, the phage must first attach itself to the bacterium (also called adsorption). Initial contact between phage and bacterium often happens through random collisions and initial binding is reversible. Not all bacteria-phage combinations have compatible receptors and receptor binding proteins, so this is a selective process. Different phage species target a range of different molecules on bacterial cells, including polysaccharide moieties, proteins and other cell surface structures such as pili. As far as we know, these target molecules all fall under the category of bacterial cell wall components or protruding structures.

Phage receptor binding proteins are most frequently associated with phage tails but have been identified in other locations on phage. Following reversible binding, the phage binds irreversibly to the cell, not always through the same receptor as the initial binding step. This two-step binding process may be beneficial especially in cases where the irreversible binding domain is less easy to access, improving the probability of pairing with the correct target cell.

Bacteria have a number of ways to defend themselves from phage attachment which center around masking the receptors with mucoid capsule or slime layers, by producing competitive inhibitors or otherwise blocking access. Phage receptors are often identified by mutations that make the bacteria resistant to phage lysis. The Phage Receptor Database (PhReD) provides a useful repository of known receptors on host cell surfaces.

Successful adsorption triggers the next stages of infection which requires injection of the phage’s genetic material into the host cell. For this the phage must penetrate the bacterial cell. Evidence has suggested that attachment and penetration are coordinated by the baseplate in tailed phage. Phage tails vary widely through nature, but the most sophisticated have a tube for delivering genetic material surrounded by a contractile sheath. The sheath contracts like a coiled spring and then on release drives the tube into the bacterial cell. In T4 phage, the entire baseplate-tail-tube complex consists of around one million atoms, making up 145 chains of 15 different proteins. The empty phage cell which is left outside the bacterium is called the ghost or doughnut.

Once inside, the phage synthesizes early proteins including endonucleases and exonucleases that degrade the host genome. They are then able to use the host cell’s machinery to synthesize proteins and produce progeny. The nucleotides released may be recycled by the phage for the replication of their own progeny (e.g. T7 phage) or excreted from the host cell (e.g. T5 phage). Small chemical modifications (in the case of T4 phage, chemical modification of the viral cytidines) to the phage genome allow its genetic material to be differentiated from the host genome and prevents self-degradation during this process. Other early proteins include those required for replication of the phage genome. RNA is not broken down, so the phage may also produce inhibitors that prevent host RNA polymerase from interfering with viral polymerases during later infection. The newly synthesized phage genome produces late proteins including the capsid subunits and tail. This process can occur within minutes of the bacteria becoming infected.

The birth of new phage

Once all the component parts have been synthesized they must be assembled into mature phage. Capsid proteins assemble to form empty heads into which condensed phage DNA is packed. The tail parts assemble independently of the head structure and the last step in synthesis is joining the filled heads to the tails to form progeny phage.

Watch the lytic cycle in action.