Molly Campbell is a senior science writer at Technology Networks. She holds a first-class honors degree in neuroscience. In 2021 Molly was shortlisted for the Women in Journalism Georgina Henry Award.
Learn about our editorial policies
Credit: Trollinho on Unsplash.

While we continue to fight the pandemic of the present – COVID-19 – scientists are using modern technologies to uncover new findings about the pandemics of the past. A new study published in Nature outlines the use of ancient DNA analysis to uncover the history of the Black Death.

The Black Death, a bubonic plague outbreak caused by the bacterium Yersinia pestis (Y. pestis), is regarded as the single deadliest pandemic in human history. “The Black Death claimed some 50–60% of the total population of West Eurasia in the course of approximately seven years (1346–53),” explains Dr. Philip Slavin, associate professor of history at the University of Stirling, Scotland.

Y. pestis infected mammals, such as mice, rats and dogs, which fleas would feed upon before transmitting the microorganism to humans through their bites. Bubonic plague is therefore an example of a zoonotic disease.

In 1347, ships docked at the Sicilian port of Messina from the Golden Horde territories in the Black Sea. Sailors that had taken the voyage were found to be either dead or profoundly ill, presenting with buboes – pus-filled boils that occur when the lymph glands swell to extremes. It is alleged that the Sicilian authorities swiftly ordered the “Black Death” ships to leave the port – but they were too late. The plague swept through Europe, killing over 35 million people. The first wave of the plague died out before the end of the century, but outbreaks continued to emerge for a further 500-years in a wave known as the “Second Plague Pandemic”.

Archaeologic items, including tombstones, from Central Asia, in a region close to Lake Issyk Kul (modern-day Kyrgyzstan) suggest that a disease widely impacted the local community. “There are, in total, 467 headstones with precisely dated inscriptions, ranging from 1248– 1345. One hundred and eighteen of these are dated between two years (1338–1339), indicating some sort of elevated mortality crisis,” says Slavin. “Some inscriptions were longer than others, and on 10 of these, ‘pestilence’ as a cause of death, was inscribed (in Syriac language, the liturgical language of local Christians). For over 100 years, this reference of ‘pestilence’ has been puzzled historians.”

Was this pestilence the Black Death? To solve the mystery, aDNA analysis of West Eurasia samples was required. 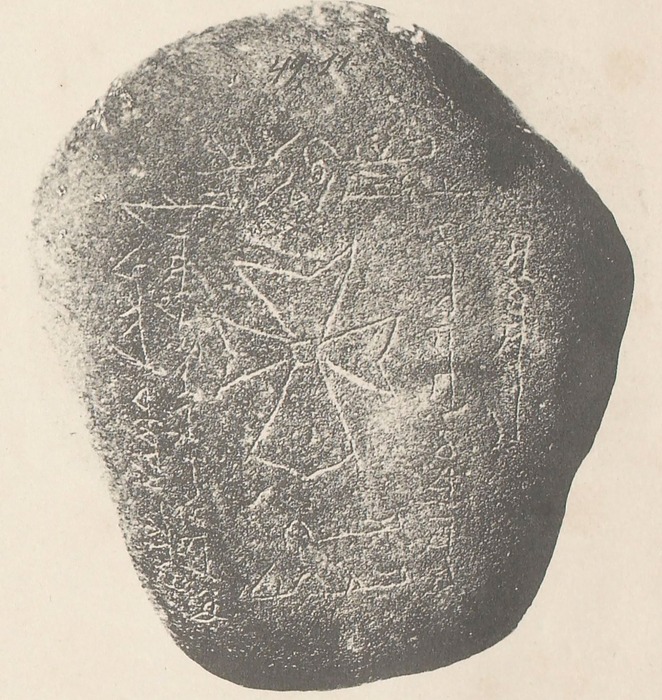 Plague inscription from the Chu-Valley region in Kyrgyzstan. The inscription is translated as follows: “In the Year 1649 [= 1338 CE], and it was the Year of the tiger, in Turkic [language] "Bars". This is the tomb of the believer Sanmaq. [He] died of pestilence”. Credit: A.S. Leybin, August 1886.

What is ancient DNA?

Ancient DNA (aDNA) refers to DNA that has been isolated from an ancient specimen and is therefore highly degraded compared to genetic material obtained from a sample in the present day. Until recently, genome sequencing technologies did not have capabilities to sequence such small samples of DNA. Modern next-generation sequencing approaches are now enabling scientists to analyze genome sequences that are thousands of years old.

An international research team – including Slavin – obtained aDNA samples from two sites at which the “pestilence” inscriptions had been found. “[They are] Two Christian (Nestorian) communities in North Kyrgyzstan, not far from Lake Issyk Kul. The first one was called Kara-Djigach, the other one Burana,” Slavin says. “These sites were situated at the heart of the Silk Road – a long-distance international trade route. Hence, some of the local inhabitants were undoubtedly engaged in international trade.”

aDNA was uncovered from the teeth of individuals laid to rest in the “pestilence” inscribed graves, and analzyed. Teeth are better preserved after death compared to other components of the body, Slavin explains, and they also preserve pathogens found in the blood stream: “During the analysis, plague bacterium, Y. pestis was detected in all three individuals.”

“After so many years have passed, some samples are more prone than others to ‘environmental contamination’, which presents some challenges,” Slavin says, but two out of three teeth had sufficient genomic coverage, which was enough to combine the genetic data and yield a clear picture. They found that the “pestilence” referred to on the gravestones was indeed the Black Death.

“Not only was Y. pestis detected in all three samples, but the high coverage of two (out of three) samples allowed us to determine their evolutionary position on the phylogenetic tree,” adds Slavin.

Phylogenetic analysis involves the study of evolutionary relationships that exist between organisms, species or genes. Such study can help to answer some of the following questions:

aDNA analysis found that the genomes of the bacterium isolated from the 1338–1339 samples fall on a node that occurred immediately before the “Big Bang” event. A node refers to a “branching point” in an evolutionary tree. The Big Bang is a notable event in the history of Y. pestis, where massive diversification of plague strains took place and the Y. pestis lineage split into four new branches.

The launching point of the Black Death

The research team suggest that the launching point of the Black Death was somewhere in the wider Tian Shan area. The Tian Shan is a great mountain system found in Central Asia, which straddles the border between China and Kyrgyzstan.

“We find that plague strains found today around the Tian Shan mountains are closely related – genetically – to the reconstructed ancient genome from 1338–1339. Therefore, we consider it most probable that the ancient strain evolved locally, within the extended Tian Shan Mountain region, and was not introduced into the Kara-Djigach community from a far-away source,” says Slavin.

The existing strains in the Tian Shan region are not only closely related to the 1338–1339 strains from Kara-Djigach, but they also belong to a different branch of a family known as the 0.ANT family. “Different 0.ANT branches had originally emerged (by diverging from the ‘main plague lineage’) before 1338–1339. The last 0.ANT branch to have emerged before the Kara-Djigach outbreak and the Big Bang event was 0.ANT3, emerging somewhere between c.1228–1315,” Slavin adds.

“Collectively, our data support an early fourteenth-century source of the Second Plague pandemic in central Eurasia,” the authors write in the paper.

The new study depicts how modern technologies – and collaboration – can be used to resolve puzzles of the past. The research team emphasize that, while plague aDNA analysis, is a fast-growing field, much more work needs to be done.

“To understand the phenomenon of emerging epidemic diseases, it is essential to have as ‘bigger’ evolutionary picture as possible,” says Slavin. “It is important to understand how these diseases develop evolutionary and historically, and to not treat different strains as isolated phenomena,” he concludes.