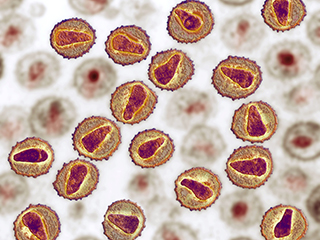 Great strides have been made in recent years to develop treatment options for HIV, and the disease can now be controlled with anti-retroviral drugs. But a cure remains elusive and current medications have limitations: they must be taken daily, for life, and can cause long-term complications.

Now, Rockefeller scientists report that they are one step closer to an alternative treatment that utilizes antibodies. This therapy has the potential for long-acting effects and would allow for less frequent dosing.

Recently published in Nature, the findings suggest that an antibody called 3BNC117 can effectively delay the virus from rebounding in patients who temporarily suspended their anti-retroviral medications, currently the standard treatment for HIV.

“These are very positive results,” says Marina Caskey, Assistant Professor of Clinical Investigation in the Laboratory of Molecular Immunology, headed by Michel Nussenzweig. “This is the longest any antibody has been able to delay virus rebound.”

The 3BNC117 antibody was isolated in the Nussenzweig lab several years ago by Johannes Scheid, co-first author of this most recent publication. It was cloned from cells of an HIV-infected patient whose immune system was able to fight HIV particularly well. The virus primarily infects CD4 T cells, part of the immune system that helps protect the body from infection. 3BNC117 stops multiple strains of HIV from hijacking these cells.

This small study, called a Phase IIa clinical trial, builds on a previous study from the Nussenzweig lab, in which HIV-infected patients were given the antibody without receiving other treatment. This time, the researchers tested 13 HIV-infected patients who had been treated successfully with antiviral therapy. The goal of the study was to determine whether the antibody alone would be able to maintain virus suppression in patients that were taken off anti-retroviral drugs.

Caskey and colleagues found that the antibody was able to delay when the virus came back to about 10 weeks, compared to about 3 weeks in controls.

One of the many challenges in treating HIV is that the virus quickly mutates. As a result, patients carry many different strains that cannot be eliminated with a single medication, and each person’s virus repertoire is different. An advantage of 3BNC117 is that is has the ability to fight a wide range of HIV strains, but not all; some studies suggest it can neutralize about 80 percent of viral isolates taken from patients.

In this study, the researchers tried to select participants whose viral strains were likely to be a good target for 3BNC117. However, current testing methods are not very precise in predicting exactly which strains are present, and patients had varied responses.

“In one-third of participants, rebound happened very late, when the antibody levels were low,” says co-first author and former graduate student in the Nussenzweig lab, Josh Horwitz. “This means that the antibody was effective at suppressing the viruses that are sensitive to it, but it’s also clear that for the remaining patients with different strains of HIV, this antibody is not sufficient.”

The researchers also found that the antibody was able to reduce the assortment of viral strains that rebounded, which tends to be very diverse in patients taken off antiretroviral medications. “We were excited to see a significant delay in rebound,” says Scheid, “but the reduced diversity of viruses that we saw is also promising because it will take fewer additional antibodies to target them.”

The next step will be to test 3BNC117 in combination with another HIV-specific antibody, such as 10-1074, which targets the virus from a different angle, and has also been shown to decrease virus levels when given to HIV patients not on treatment.

“There are a lot of factors at play here, part of which is that we are working with a diverse reservoir of viruses with different sensitivities to different antibodies,” says Caskey. “However, we are hopeful that testing the antibodies in combination will be successful in bringing us closer to better strategies to prevent and treat HIV.”