Are White Cells the Key to Better Malaria Vaccines?

Are White Cells the Key to Better Malaria Vaccines?

Complete the form below and we will email you a PDF version of "Are White Cells the Key to Better Malaria Vaccines?" 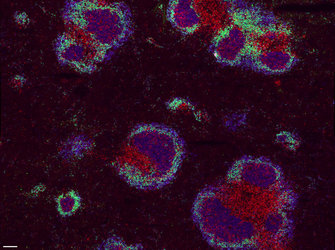 A class of white cells that has long been thought to play a relatively minor role in the body’s defences against malaria infection may, in fact, be a potent weapon against the malaria parasite. These cells may be significant for developing more effective vaccines, according to a report today in the journal Immunity.  UW Medicine and Seattle Children’s researchers headed the study.

The findings suggest that these white blood cells, called IgM memory B cells, may be more important in the body’s early response to malaria re-infection than another group of cells, called IgG memory B cells, that for years have been the focus of malaria-vaccine research, said Marion Pepper, University of Washington assistant professor of immunology. She led the research project.

“The focus on IgG memory B cells in malaria vaccine development may be why malaria vaccines developed to date have not proven very effective,” Pepper said.

Malaria is a parasitic infection that is spread through the bite of infected mosquitoes. It is widespread in tropical and subtropical regions of Asia, Latin America and Africa. The malaria parasite causes more than 200 million cases of illness and 430,000 deaths a year. The need for an effective vaccine is urgent: Drug-resistant parasites are becoming more common, as are malaria-carrying mosquitoes resistant to the insecticides.

So far, however, even the most promising malaria vaccines have proven to provide only weak, short-lived protection.

B cells are a class of immune cells that produce antibodies to fight invading viruses, bacteria, and parasites. As newly formed cells, they are in an inactive, or naive, state. In this state, they have two kinds of antibody-like receptors on their surfaces, called IgM and IgD. When they encounter a protein, called an antigen, from a pathogen that matches those cell-surface receptors, the B cells become active.

When this happens, some of these activated B cells immediately begin pumping out either IgM or IgD antibodies, thereby launching the immune system’s initial defence. But others move to specialized centres in the spleen and lymph nodes, where they undergo a process called somatic hypermutation. This results in production of B cells that secrete antibodies that have higher affinity for the antigen and are therefore, more effective. Many also undergo a process called class switching in which they changed the type of antibody they produce, typically switching from IgM and IgD to primarily IgG.  This move creates a large population of IgG-producing B cells.

After the infection has been removed, some of the activated B cells become dormant “memory B cells”. These cells, which can persist for years, even for a lifetime, can be quickly reactivated should a second infection occur. They are ready to produce large amounts of the refined, high-affinity antibodies so that the invader can be neutralized before it can take hold.

Because of this tendency to provide long-term protection, researchers have sought to develop vaccines that generate memory B cells capable of producing a strong IgG response to an infection. In fact, the ability of a vaccine to generate high levels of IgG in the blood is a standard measure of an experimental vaccine’s potential effectiveness and a goal of vaccine developers.

IgM B cells, on the other hand, were thought to provide only a transient initial response to infection, and to play only a minor role in generating a memory B cell response to re-infection.

In the new study, the UW researchers used a fluorescent marker that bound to B cell receptors for a malaria parasite antigen called Merozoite Surface Protein 1. This tag allowed them to track memory B cells in previously malaria-infected mice when they were reinfected with the parasite.

The scientists found that, although there were far fewer IgM memory B cells compared to IgG memory B cells at the time of reinfection, the IgM memory B cells began to multiply far more rapidly than the IgG memory B cells.  They observed that early in the immune systems’ response most of the newly formed antibody-producing cells were in fact IgM-secreting cells, not IgG-secreting cells. What’s more, they found that the IgM antibodies these cells produced had undergone somatic hypermutation. They were producing high-affinity antibodies whose affinity for the Merozoite Surface Protein 1antigen was equal to that seen with IgG antibodies.