In people with asthma, the cells that line the airways in the lungs are unusually shaped and “scramble around like there’s a fire drill going on.” But according to a study at the Harvard T.H. Chan School of Public Health, an unexpected discovery suggests intriguing new avenues both for basic biological research and for therapeutic interventions to fight asthma.

The findings could also have important ramifications for research in other areas, notably cancer, where the same kinds of cells play a major role. 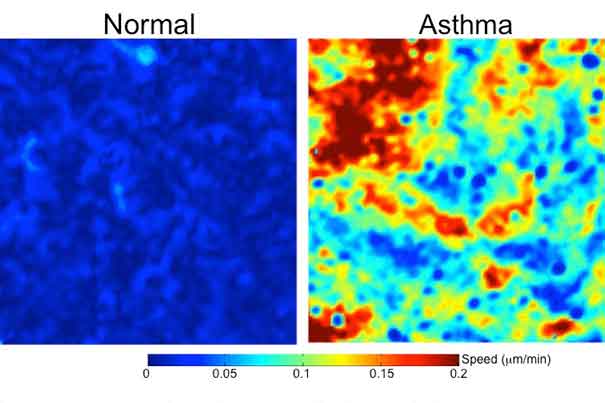 Until now, scientists thought that epithelial cells — which line not only the lung’s airways but major cavities of the body and most organs — just sat there motionless, like tiles covering a floor or cars jammed in traffic, said Jeffrey Fredberg, professor of bioengineering and physiology at the Harvard Chan School and one of the senior authors of the study. But the study showed that, in asthma, the opposite is true.

The physics of biology

The researchers decided to look at the detailed shape and movement of cells from the asthmatic airway because, according to Fredberg, a growing body of research is showing that physical forces change how cells form, grow, and behave. Given this knowledge — and the fact that no one knows what causes asthma, which afflicts more than 300 million people worldwide — it made sense to look at the shape and movement of epithelial cells, which many scientists think play a key role in the disease.

The study included lead authors Jin-Ah Park and Jae Hun Kim, research scientists in the Department of Environmental Health who study asthma, andJeffrey M. Drazen, a pulmonologist and professor in the department, who studies “mechanotransduction” in asthma — how the bronchial constriction of asthma might trigger cell changes in the epithelium. The study also included mathematical physicists James Butler, senior lecturer on physiology in the Department of Environmental Health, and M. Lisa Manning and Max Bi at Syracuse University, as well as colleagues from the Harvard Chan School and other Harvard institutions.

Asthma cells on the move

To analyze cell movement, the researchers took time-lapse images of epithelial cells. They also produced videos that show quite vividly the differences between normal cells and asthmatic cells. The videos show that the normal cells are nearly pentagon-shaped and are jammed — they hardly move at all — while the asthmatic cells become more spindle-shaped and constantly move and swirl without jamming.

To analyze the mechanical forces at work, the researchers placed layers of epithelial cells — from either normal airways or asthmatic airways — on a soft gel surface that simulated the degree of stiffness of the lung. As the cells moved, their push-pull motion caused the gel to move as well. This gel’s movement enabled the researchers to infer the mechanical forces at work among the cells.

Now that it’s known that epithelial cells in asthmatic airways are oddly shaped and not jammed, scientists have to figure out why it’s happening — whether asthma causes the cells to unjam, or the unjamming of the cells causes asthma.

“It’s a very big question to figure out why this particular cell shape and movement is happening,” said Park. “We know that asthma is related to genes, environment, and the interaction between the two, but asthma remains poorly understood.”

Whatever the reason, knowing more about how these cells jam and unjam is important, said Fredberg, because epithelial cells play a prominent role not just in asthma, but in all processes involving cell growth and movement, including organ development, wound healing, and, importantly, cancer. The findings open the door to new possibilities for developing drugs to fight asthma as well as other diseases — and to new research questions.

“Trying to define how cells behave, how they exert forces on each other, and how that changes what they do are big open questions,” said Fredberg. “Researchers all over the world are looking more and more at these questions. It’s very exciting.”