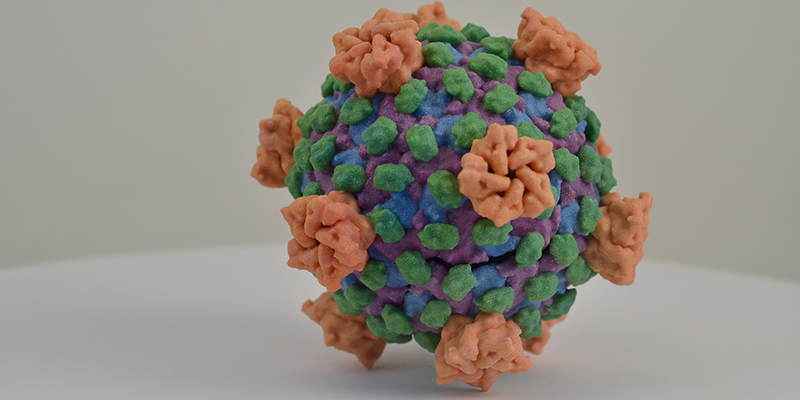 A virus that causes childhood coughs and colds could help in the fight against primary liver cancer.

Reovirus stimulates the body’s own immune system to kill off the cancerous cells, researchers from the University of Leeds discovered. In addition, Reovirus is able to kill off the hepatitis C virus – a common cause of primary liver cancer – at the same time, the team found. These early-stage findings are important because primary liver cancer is the third highest cause of cancer deaths worldwide and, if surgery is not an option, the prognosis is poor.

Study co-leader Dr Stephen Griffin, Associate Professor of Viral Oncology in the Leeds Institute of Cancer and Pathology at the University of Leeds, said: “Ultimately we hope that by simultaneously treating the tumour, and the hepatitis virus that is driving the growth of the tumour, we may provide a more effective therapy and improve the outcomes for patients.

“Current treatments for liver cancer that can’t be removed by surgery are mainly palliative – with chemotherapy only tending to prolong life, rather than cure – and it can have significant side effects.”

Reovirus can cause respiratory illnesses and stomach upsets in children but by adulthood most people have been exposed to it and so it does not cause illness.

The University of Leeds team, whose study is published today in the journal Gut, found that Reovirus was successful in treating both liver cancer cells grown in the laboratory and those taken directly from patients undergoing surgery.

When introduced into the body, Reovirus stimulates an immune system factor known as interferon, which in turn causes the activation of a specific white blood cell called a Natural Killer cell.

These Natural Killer cells then kill both the tumour, and cells infected with the hepatitis C virus.

Stimulating the immune system to kill cancer cells is known as immunotherapy. It differs from chemotherapy, in which the actual drugs kill the cancer cells.

The researchers are now hoping to start the first in-human clinical trials.

“Our study establishes a completely new type of viral immunotherapy for the most common primary liver cancer type, hepatocellular carcinoma, which has a very poor prognosis in its advanced form.

“Using a mixture of experiments in human cancer samples and mice, our research showed that the Reovirus therapy switches on the host immune system to attack cancer cells – as well as suppressing the replication of hepatitis C virus, which is linked to many hepatocellular cancers.

“We also showed that Reovirus therapy could be used to treat a range of other cancer types associated with viral infection, including Epstein Barr Virus-associated lymphoma.”

Primary liver cancer is cancer that starts in the liver and is a separate condition from secondary liver cancer, where the cancer originally develops in another part of the body and then spreads to the liver.

Most cases of primary liver cancer are associated with damage and scarring of the liver, most commonly from having a hepatitis B or hepatitis C viral infection. Less commonly it is caused by drinking excessive amounts of alcohol over many years.

At least 130 million people globally have chronic hepatitis C infection, according to the World Health Organisation, and a significant proportion of these will develop liver cancer.

Co-researcher Dr Adel Samson from the University of Leeds said: “It is becoming increasingly clear that one of the most powerful weapons available to treat cancer is our own immune system.

“However, as cancers are formed from our own cells, the immune system frequently struggles to identify the subtle differences that differentiate cancerous cells from normal cells, without help.

“Immunotherapy involves various strategies – such as a virus, as in our study - to kick-start our immune system to better identify and fight cancer.

“These ‘oncolytic’ viruses show great promise in clinical trials, and the first such virus has recently been licensed as a medicine for the treatment of skin cancer.”

Dr Justine Alford, senior science information officer at Cancer Research UK which funded the research, said: “This study in cells and mice suggests the possibility of using a harmless oncolytic virus as an immune-boosting one-two punch against liver cancer and the cancer-causing hepatitis C virus.

“These early results also suggest this oncolytic virus could be used more widely in the treatment of virus-driven cancers.

“In these cancers, the viruses can represent a major hurdle for treatment, so we urgently need new and effective ways to tackle the root of the problem.

“The next step will be to see if this technique will work in patients.”

Story from the University of Leeds. Please note: The content above may have been edited to ensure it is in keeping with Technology Networks’ style and length guidelines.

Researchers have discovered a formulation of existing medicines that can significantly reduce the presence of the fungus Candida auris on skin, controlling its spread and potentially keeping it from forming infections that have a high mortality rate.

END_OF_DOCUMENT_TOKEN_TO_BE_REPLACED

An opioid that exclusively targets diseased tissues and spares healthy tissues has been shown to relieves pain from inflammatory bowel disease without causing side effects, in mouse studies.