Molly Campbell is a senior science writer at Technology Networks. She holds a first-class honors degree in neuroscience. In 2021 Molly was shortlisted for the Women in Journalism Georgina Henry Award.
Learn about our editorial policies
Varicella zoster virus (VZV), which commonly causes chickenpox and shingles, activates herpes simplex virus (HSV) from dormancy in neural tissue grown in vitro, which then leads to an increase in plaque deposits and decrease in neural signaling - hallmarks of Alzheimer's disease. Credit: Tufts University.
Read time:

A new study by researchers at the University of Oxford and Tufts University suggests that the onset of Alzheimer’s disease may be triggered by the activation of two common viruses.

Alzheimer’s disease (AD) presents a myriad of challenges to the researchers trying to cure it, and the clinicians who are required to diagnose it. Many patients that develop AD are elderly, and so the hallmark symptoms of the disease, such as memory loss, can be confused with normal manifestations of the healthy aging process. While some symptoms can be managed using drugs, a cure does not yet exist, owing largely to the fact we still don’t know what causes the disease. 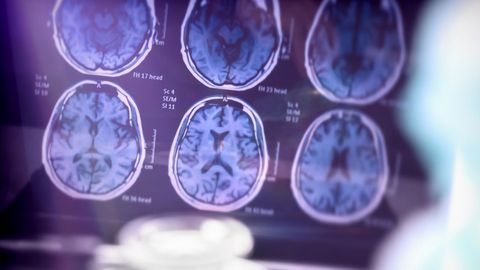 END_OF_DOCUMENT_TOKEN_TO_BE_REPLACED

For decades, the dominating hypothesis on how AD occurs revolved around a sticky molecule – amyloid – which clumps together to form plaques and kills healthy neurons in the process. Indeed, amyloid plaques are found in the brains of AD patients, but targeting their formation using pharmacological interventions has proven somewhat futile.

Another theory started to build traction several years ago, one that proposes AD pathology may be triggered by some form of infection. A new body of work by David Kaplan, Stern Family professor of engineering and chair of the Department of Biomedical Engineering at Tufts’ School of Engineering adds credence to this theory. Using stem cell cultures that model the brain in vitro, Kaplan and colleagues have demonstrated that the varicella zoster virus (VZV), known to cause chickenpox and shingles, could activate a second virus, herpes simplex virus 1 (HSV-1), to set the molecular wheels of AD pathology in motion. The study is published in the Journal of Alzheimer's Disease.

A dormant virus in Alzheimer’s disease

“We have been working off a lot of established evidence that HSV has been linked to increased risk of Alzheimer’s disease in patients,” Kaplan said in a news release. Professor Ruth Itzhaki, a visiting professorial Fellow at the Oxford Institute of Population Ageing, was one of the first scientists to propose a link between viruses and AD. Itzhaki is one of Kaplan’s collaborators on the new study.

“We know there is a correlation between HSV-1 and Alzheimer’s disease, and some suggested involvement of VZV, but what we didn’t know is the sequence of events that the viruses create to set the disease in motion,” Kaplan added. “We think we now have evidence of those events.”

HSV-1 is typically dormant in neurons. When activated, it can lead to the development of phenotypes that mirror the signature hallmarks of AD, including the formation of plaques and protein tangles. Using their in vitro brain model, the researchers infected cells with HSV-1 and/ or VZV and investigated the impact on the cultured cells. They found that neurons could be infected with VZV, but this alone was not sufficient to trigger the formation of plaques or protein tangles. VZV infection of cells that harbored the dormant HSV-1 virus, however, could cause reactivation of HSV-1, and consequently the formation of AD phenotypes in the brain model.

“It’s a one-two punch of two viruses that are very common and usually harmless, but the lab studies suggest that if a new exposure to VZV wakes up dormant HSV-1, they could cause trouble,” said Dana Cairns, a research associate in the Biomedical Engineering Department at Tufts.

VZV is incredibly common, and approximately 95% of individuals are infected before they reach the age of 20. The virus can be reactivated to cause shingles, typically affecting one in three people during the course of their lifetime. Approximately 3.7 billion people experienced HSV-1 infection in 2016, according to the World Health Organization.

The research study by Kaplan and colleagues provides evidence of an indirect role for VZV in AD pathology, via reactivation of HSV-1 in neurons. Exploring methods to halt the activation of VZV, and potential reactivation of HSV-1 – such as vaccination – could be a therapeutic approach for AD. However, as the research was conducted in vitro, further in vivo work will likely be required to confirm the link observed in this study.

This article is a rework of a press release issued by Tufts University. Material has been edited for length and content.