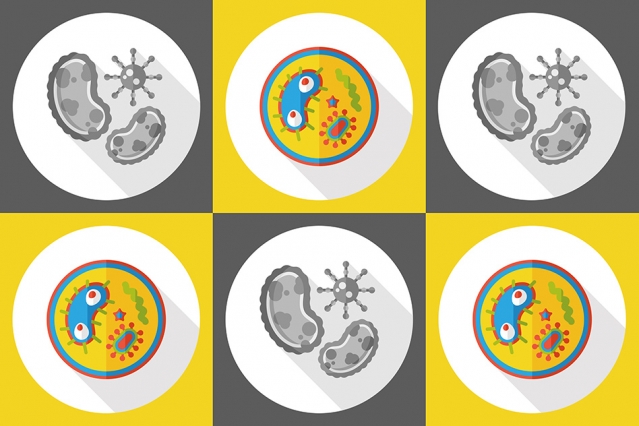 Over the past few decades, many bacteria have become resistant to existing antibiotics, and few new drugs have emerged. A recent study from a U.K. commission on antimicrobial resistance estimated that by 2050, antibiotic-resistant bacterial infections will kill 10 million people per year, if no new drugs are developed.

To help rebuild the arsenal against infectious diseases, many scientists are turning toward naturally occurring proteins known as antimicrobial peptides, which can kill not only bacteria but other microbes such as viruses and fungi. A team of researchers at MIT, the University of Brasilia, and the University of British Columbia has now engineered an antimicrobial peptide that can destroy many types of bacteria, including some that are resistant to most antibiotics.

“One of our main goals is to provide solutions to try to combat antibiotic resistance,” says MIT postdoc Cesar de la Fuente. “This peptide is exciting in the sense that it provides a new alternative for treating these infections, which are predicted to kill more people annually than any other cause of death in our society, including cancer.”

De la Fuente is the corresponding author of the new study, and one of its lead authors along with Osmar Silva, a postdoc at the University of Brasilia, and Evan Haney, a postdoc at the University of British Columbia. Timothy Lu, an MIT associate professor of electrical engineering and computer science, and of biological engineering, is also an author of the paper, which appears in the Nov. 2 issue of Scientific Reports.

Antimicrobial peptides, produced by all living organisms as part of their immune defenses, kill microbes in several different ways. First, they poke holes in the invaders’ cell membranes. Once inside, they can disrupt several cellular targets, including DNA, RNA, and proteins.

These peptides also have another critical ability that sets them apart from traditional antibiotics: They can recruit the host’s immune system, summoning cells called leukocytes that secrete chemicals that help kill the invading microbes.

Scientists have been working for several years to try to adapt these peptides as alternatives to antibiotics, as bacteria become resistant to existing drugs. Naturally occurring peptides can be composed of 20 different amino acids, so there is a great deal of possible variation in their sequences.

“You can tailor their sequences in such a way that you can tune them for specific functions,” de la Fuente says. “We have the computational power to try to generate therapeutics that can make it to the clinic and have an impact on society.”

In this study, the researchers began with a naturally occurring antimicrobial peptide called clavanin-A, which was originally isolated from a marine animal known as a tunicate. The original form of the peptide kills many types of bacteria, but the researchers decided to try to engineer it to make it even more effective.

Antimicrobial peptides have a positively charged region that allows them to poke through bacterial cell membranes, and a hydrophobic stretch that enables interaction with and translocation into membranes. The researchers decided to add a sequence of five amino acids that would make the peptides even more hydrophobic, in hopes that it would improve their killing ability.

This new peptide, which they called clavanin-MO, was very potent against many bacterial strains. In tests in mice, the researchers found that it could kill strains of Escherichia coli and Staphylococcus aureus that are resistant to most antibiotics.

“By using the thereby designed molecule, infected animals could be rescued from infections that were untreatable (and thus lethal) with standard antibiotic therapies. Whether this specific compound makes it to the hospital in the short run, the strategy of merging a killer activity with immunomodulant properties opens new avenues for dealing with the phenomenal AMR [antimicrobial resistance] problem,” says Victor de Lorenzo, a research group leader at the National Center of Biotechnology in Madrid, who was not involved in the study.

Another key advantage of these peptides is that while they recruit immune cells to combat the infection, they also suppress the overactive inflammatory response that can cause sepsis, a life-threatening condition.

“In this single molecule, you have a synthetic peptide that can kill microbes — both susceptible and drug-resistant — and at the same time can act as an anti-inflammatory mediator and enhance protective immunity,” de la Fuente says.

The researchers also found that these peptides can destroy certain biofilms, which are thin layers of bacterial cells that form on surfaces. That raises the possibility of using them to treat infections caused by biofilms, such as the Pseudomonas aeruginosa infections that often affect the lungs of cystic fibrosis patients. Or, they could be embedded into surfaces such as tabletops to make them resistant to microbial growth.

Other possible applications for these peptides include antimicrobial coatings for catheters, or ointments that could be used to treat skin infections caused by Staphylococcus aureus or other bacteria.

If these peptides are developed for therapeutic use, the researchers anticipate that they could be used either in stand-alone therapy or together with traditional antibiotics, which would make it more difficult for bacteria to evolve drug resistance. The researchers are now investigating what makes the engineered peptides more effective than the naturally occurring ones, with hopes of making them even better.