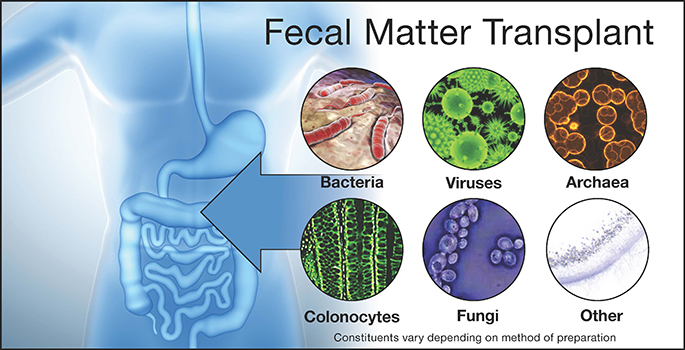 These days fecal transplantation is no joke.

Fecal transplants are increasingly being used as the treatment of last resort for certain infections in the human gut and have had remarkable success treating the nursing home and hospital-acquired scourge, Clostridium difficile colitis, an infectious diarrhoea that often follows antibiotic treatment. There is also preliminary evidence that the transplantation of stool from healthy individuals can be effective in treating multiple sclerosis and Crohn’s disease.

“This research is just getting started. It is driven by the new paradigm of the microbiome which recognizes that every plant and animal species harbours a collection of microbes that have significant and previously unrecognized effects on host health, evolution and behaviour,” said Seth Bordenstein, associate professor of biological sciences and pathology, microbiology, and immunology at Vanderbilt University.

In an article titled “Fecal Transplants: What is Being Transferred” just published in the journal PLOS Biology, Bordenstein reviews the growing scientific literature on the subject.

“There is no doubt that poo can save lives,” said Bordenstein. Take the case of the use of fecal transplants to treat Clostridium difficile infections. According to the literature, it has a 95 percent cure rate. “Right now fecal transplants are used as the treatment of last resort, but their effectiveness raises an important question: When will doctors start prescribing them, or some derivative, first?” Bordenstein asked.

It turns out fecal transplantation has a long history in Chinese medicine. An early-recorded application in humans was in the 4th century by a Chinese medical doctor named Ge Hong. In the 16th century, it was popular enough to get the nickname “yellow soup.”

Interest among Western scientific circles was minimal until the year 2010, with fewer than 10 articles on the subject appearing per year in PubMed, an index of biomedical literature. Starting in 2011, however, the number began an exponential rise with more than 200 papers on fecal transplantation appearing in 2015, a trend that shows no sign of slacking.

So far most of the research has been focused on the role of the bacteria in donor’s stool. Bacteria are the most abundant active agent in the material. However, they are not the only functional player in feces, Bordenstein cautioned. “Feces is a complex material that contains a variety of biological and chemical entities that may be causing or assisting the effects of these transplants.”

Healthy human stool contains on average 100 billion bacteria per gram. But it also contains 100 million viruses and archaea per gram (Archaea are an understudied domain of single-celled organisms that were classed as bacteria until the 1970’s). In addition, there are about 10 million colonocytes (human epithelial cells that help protect the colon) and a million yeasts and other single-celled fungi per gram.

According to Bordenstein, focus on the bacterial component makes sense in some cases, such as the treatment of Clostridium difficile colitis, but in other cases, such as the possible treatment of multiple sclerosis, it is quite possible that the effects of fecal transplants may be influenced by, or possibly even caused by, their non-bacterial constituents. As a result, he calls for increased research designed to separate out the effects and interactions of each of these components.

“When scientists identify the specific cocktails that produce the positive outcomes, then they can synthesize or grow them and put them in a pill. That will go a long way to reducing the ‘icky factor’ that could slow public acceptance of this new form of treatment,” said Bordenstein.