Researchers have trained male ferrets to detect a specific odor signature in feces from ducks infected with low pathogenic avian influenza A virus (LPAI). The study was published in PLoS ONE.

The domesticated male ferrets were taught to exhibit an “active scratch alert” in response to infected feces from mallards. This odor alert response was defined as the ferret scratching with one or both forepaws at a metal scratch box (Figure 1).

“The ferrets were trained to perform this task in stages. Approaching the box, touching the box and finally scratching at the box would result in the activation of a clicker and presentation of a syringe filled with FerretVite as a reward,” explains Glen Golden, a research scientist at Colorado State University and first author of the study.

Avian influenza (AI) is the name given to the disease caused by infection with an avian influenza Type A virus. While these viruses do not typically infect humans or other mammals, they occur naturally among some wild birds and are capable of infecting domestic or commercial poultry. The disease is spread from bird to bird via direct contact or through contaminated food, water, body fluids or feces.

Golden elaborates on the global impact of the virus: “In the spring of 2015, outbreaks of avian influenza virus (AIV) infection included the spread of highly pathogenic AIV in commercial poultry as well as backyard flocks. The 2015 outbreaks resulted in estimated losses of more than several billion dollars impacting egg production and the foodservice industry.”

Golden explains that almost fifty million domestic birds were lost to death by illness or by culling because of the virus. Highly pathogenic AIVs were identified in commercial poultry, backyard flocks, captive birds and wild birds in 21 States during the outbreak.

“There is evidence of transmission to humans in several farmworkers in Russia,” says Golden. On February 18, 2021, the Russian authorities reported to the World Health Organization (WHO) that H5N8 AIV had been detected in seven human clinical specimens. The infected individuals were aged between 29 to 60 years and had been working on a poultry farm – these were the first reported cases of this strain in humans.

Some LPAI strains can mutate into highly pathogenic strains, therefore, given the potential effects of AIV on domestic animals, the commercial poultry industry and human health, cost-effective tools are vital for the detection of AIV infection.

Golden and colleagues set out to determine whether ferrets could be used as biodetectors for LPAI.

“Chemical analyses conducted in a previous study demonstrated that LPAI infection was associated with a marked increase of 3-hydroxy-2-butanone (or acetoin) in relation to 1-octen-3-ol (octenol) in feces,” explains Golden. “The ratio of these two compounds was significantly greater in the feces of AIV-infected ducks (10–50:1) in comparison to ducks pre-infection (1–5:1).” 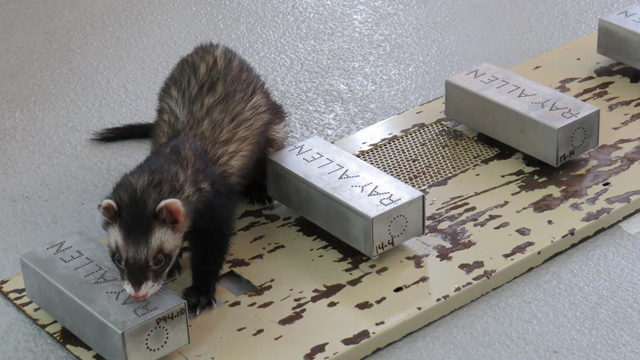 The researchers presented the ferrets with a single box containing an odor ratio reflecting AIV-infected ducks and rewarded them for scratching at the box. “The ferrets were then presented with five boxes with four acetoin:octenol ratios reflecting “non-infection” and a single acetoin:octenol ratio reflecting “infection” and [we] rewarded scratch alerts at the high ratio boxes and ignored alerts to the low ratio boxes” says Golden.

The ferrets quickly realized that they only received a reward when they selected the box holding the high acetoin:octenol ratios.

When designing the study, the authors were careful to consider potential confounding effects (e.g., duck identity, housing and feed, day of sample collection (post-infection), etc.) Additional experiments were conducted to confirm that the animals were selecting samples based on odors exclusively linked to infection.

“The most important points to be considered were that the ferrets were responding to the odor of infection status (not some other variable like diet or age of the sample) and that this odor cue they were using was specific to the metabolic results of being infected with AIV and that it wasn’t just an odor resulting from a general immune response that could be associated with infection by other pathogens,” says Golden.

The team demonstrated that ferrets can be used effectively to detect fecal samples from infected mallards and that the odor signature used was specific to avian influenza A viruses. “This odor signature is not compromised by species, individual identity, diet, geographic location where samples were collected or the age of a collected sample,” Golden adds.

Ferrets were chosen as a "bridge" species between mice and dogs in a proof-of-concept study to provide data that mammalian olfaction could be used in the detection of metabolic changes brought about by viral infection. According to Golden, the team has now "'upgraded' to dogs for the advantages the species offers such as better focus, greater motivation to please, etc."

Potential for broader applications and next steps

In terms of next steps, Golden explains that it would be beneficial to know whether the odor signal used to determine infection in fecal samples can be used to confirm infection status in the more complex patterns of whole-body odor. “Early attempts to answer this question using gastrointestinal tracts harvested from AIV infected ducks suggest this is possible. In terms of chronic wasting disease (CWD) in white-tailed deer, biodetectors capable of identifying CWD in carcasses or live deer would offer non-invasive, early detection,” says Golden.

“Early detection is another beneficial use of trained biodetectors. The ferrets were able to identify samples from AIV-infected individuals both prior to and after viral shed detectable by current lab techniques (i.e., PCR). Other areas of interest include discriminating between low and high pathogenic strains of avian influenza virus A and different strains of AIV,” concludes Golden.