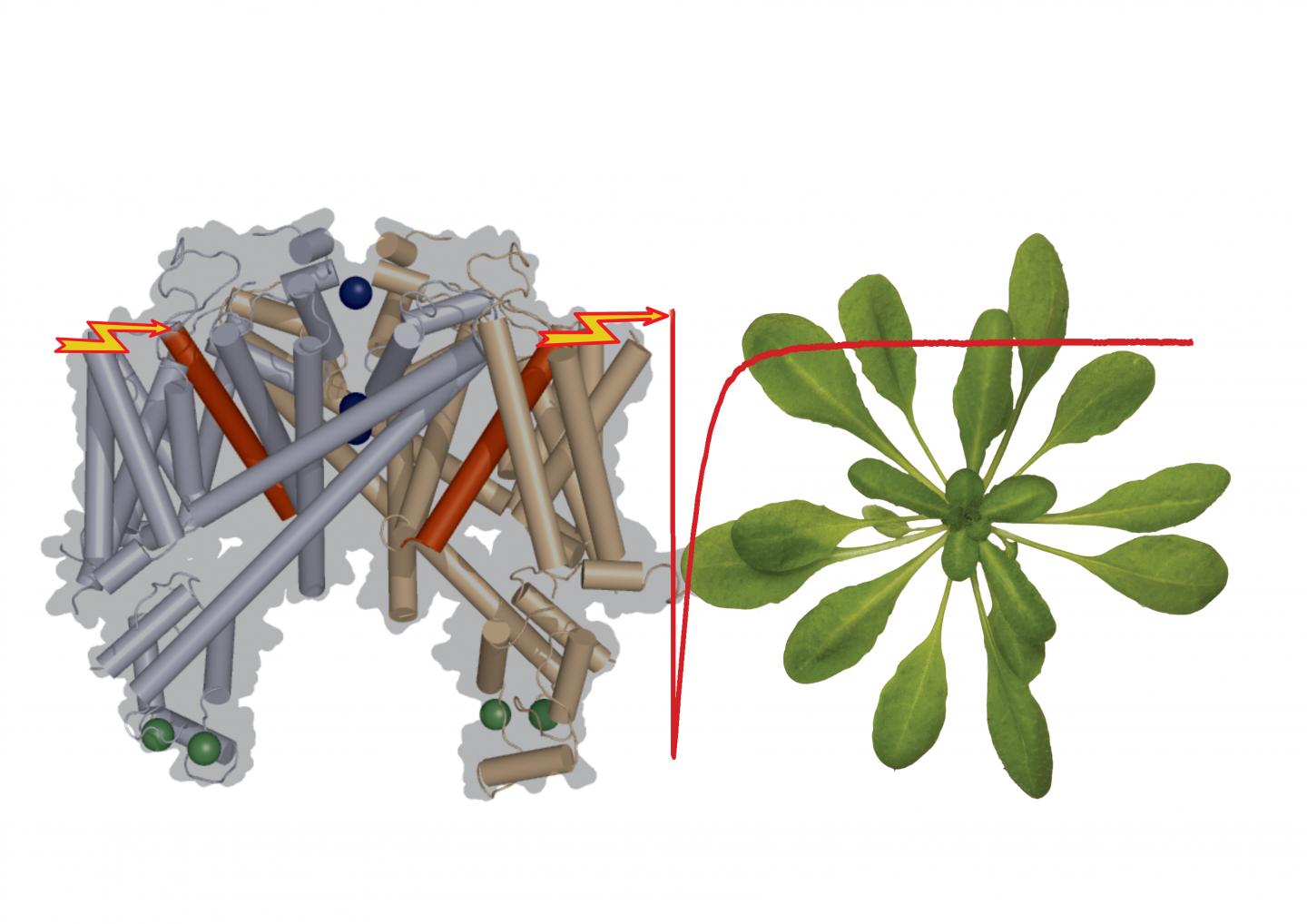 "We have been asking ourselves for many years what molecular components plants use to exchange information among each other and how they sense the changes in electric voltage," says Professor Rainer Hedrich, Head of the Chair for Molecular Plant Physiology and Biophysics at the University of Würzburg.

This question has been intriguing Hedrich since the mid 1980s when he was still a postdoc in the laboratory of Erwin Neher at the Max Planck Institute in Göttingen. "Back then, we used the patch clamp technique to make the first-time discovery of an ion channel in plants which is activated by calcium ions and an electric field." In 2005, other scientists then found the gene underlying this ion channel (name: TCP1). And now it has been Hedrich's team again that has identified that part of the channel which functions as a sensor for electric voltage and activates the channel.

Their detailed findings are published in the journal Plant Biology. Having received attention from the scientific world, the article has been recommended by the "Faculty of 1000" in the meantime. The renowned platform, which evaluates scientific publications, is operated by worldwide leaders in biology and medicine.

The discovery of the voltage sensor was made by international teamwork. Initially, Hedrich got support from Professor Thomas Müller of his own department. The structural biologist created a three-dimensional model of the TPC1 channel protein. This allowed areas in the protein to be localised that are eligible as voltage sensors. "Our model clearly showed that the TCP1 channel is made up of two interconnected, nearly identical protein units each capable of forming a potential voltage sensor," Müller explains.

An analysis of the evolution of the TCP1 gene shed even more light on the matter. The Würzburg scientists Jörg Schulz, Professor of Computation Biology, and Dirk Becker, a team leader at Julius von Sachs Plant Research Institute, found out that the gene first occurs with the evolution of cells that have a nucleus. Since then, all living beings, humans included, seem to have had it. "During the analysis, we noticed that the second unit of the TPC1 protein has hardly changed in millions of years. It is almost identical from simple protozoa to plants and humans," Becker further.

So they had to look for the voltage sensor in the second protein unit. The work group of Würzburg electrophysiologist Irene Marten then delivered the decisive experimental cue: Plants that carry a mutation in a special subunit of the channel have lost their ability to respond to the electric field.

"Together with the former Würzburg biophysicists Gerald Schönknecht, presently researching at Oklahoma State University in the USA, and Ingo Dreyer, currently at University Talca in Chile, we then developed a mathematical model. This model can explain how the electric switch in the TPC1 channel protein works at the molecular level," Hedrich explains.

What does the plant channel have to do with Ebola?

What effects do mutations in the TPC1 channel have? According to the researchers' findings, they make the plant appear injured and change the perception of and defence against pathogens. Already in 2009, the Würzburg researchers showed that plants having a hyperactive form of the channel are in a constant state of alert and are hypersensitive to injury or attack by insects.

"Together with a Swiss work group, we are now investigating what interventions in the morbid channel can help heal the plant again," Hedrich says. "Maybe this will give us new insight into the infection path of Ebola viruses." This is because these pathogens use the human TPC1 channel to get access to the cells.