Weill Cornell Medical College researchers have shown for the first time that a gene previously implicated in blood vessel formation during embryonic development and tumor growth also induces immune suppression during tumor development. This finding, published April 29 in Nature Communications, opens the door for new therapeutic approaches and vaccine development in treating patients with melanoma and other advanced-staged cancers.

Two decades ago, researchers discovered that a gene called Inhibitor of Differentiation 1 (Id1), which is normally found in the embryo, was also present in cancer patients and contributing to tumor progression. The present study reveals another way that Id1 works, hijacking a normal pathway in immune cell development and interfering with the entire immune system, starting in the bone marrow. Without competent immune cells, the body can't fight off tumors, and instead, cancer is allowed to grow, spread and thrive. 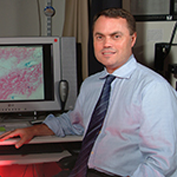 "Targeting Id1 offers the potential to restore overall immune function," said senior author Dr. David Lyden, the Stavros S. Niarchos Professor in Pediatric Cardiology and a professor of pediatrics in the Department of Pediatrics at Weill Cornell Medical College. "When the immune system is functioning, treatment options are more plentiful. Given the increased incidence and death rates tied to advanced stage metastatic cancers, there is also an increased urgency to understand how pro-metastatic, immunosuppressive mechanisms, like those driven by Id1, work."

The investigators discovered that a tumor-secreted protein called transforming growth factor beta (ΤGFβ) promotes the activation of Id1. The gene then sets off a chain reaction that redirects immune cells down a new pathway that churns out immature suppressor cells, extinguishing the immune system's ability to mount an effective defense and allowing cancer to grow and spread unabated.

"Normally, the bone marrow produces, among other immune cell types, dendritic cells, which are capable of stopping the spread and growth of tumors," said first author Dr. Marianna Papaspyridonos, who was a Fulbright Cancer Research Fellow at Cornell University in Dr. Lyden's lab. "But when TGFβ is released by the tumor and Id1 is upregulated, the normal generation of dendritic cells is interrupted, and instead another subset of immune cells, which suppresses the immune system, is formed."

Targeting Id1 might provide a three-pronged therapeutic approach, which would first reduce the metastatic potential of the tumor itself, then reduce the tumor's ability to form new blood vessels, a process called vasculogenesis, and finally restore the patient's systemic immune function.

"With this approach, immune cells will recognize a tumor as foreign and attack it," said Dr. Lyden, who also has appointments in the Sandra and Edward Meyer Cancer Center and the Gale and Ira Drukier Institute for Children's Health at Weill Cornell. "This will improve vaccine development, lead to better treatment outcomes and ultimately benefit cancer patients."