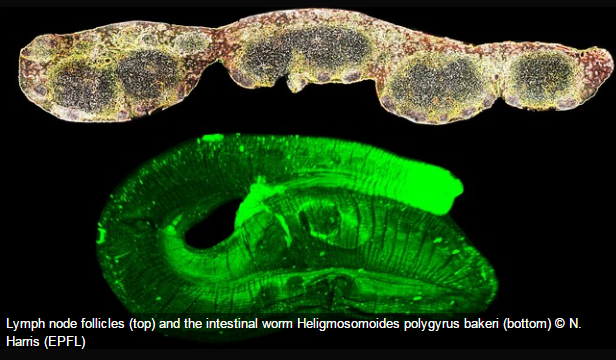 In order to fight invading pathogens, the immune system uses “outposts” throughout the body, called lymph nodes. These are small, centimeter-long organs that filter fluids, get rid of waste materials, and trap pathogens, e.g. bacteria or viruses. Lymph nodes are packed with immune cells, and are known to grow in size, or ‘swell’, when they detect invading pathogens. But now, EPFL scientists have unexpectedly discovered that lymph nodes also produce more immune cells when the host is infected with a more complex invader: an intestinal worm. The discovery is published in Cell Reports, and has significant implications for our understanding of how the immune system responds to infections.

The discovery was made by the lab of Nicola Harris at EPFL. Her postdoc and first author Lalit Kumar Dubey noticed that the lymph nodes of mice that had been infected with the intestinal worm Heligmosomoides polygyrus bakeri had massively grown in size. This worm is an excellent tool for studying how the worm interacts with its host, and is therefore used as a standard throughout labs working in the field.

Lymph nodes have microscopic compartments called “follicles”, where they store a specific type of immune cells, the B-cells. Stored in the follicles, B-cells pump out antibodies into the bloodstream to attack invading pathogens.

The researchers found that the mouse lymph nodes were actually producing more follicles, suggesting they were producing more B-cells in response to the worm infection. Of course, this is not a simple event. Like many biological processes, it involves an entire sequence of molecular signals that result in the formation of new cells and tissue.

The EPFL scientists were able to reconstruct the molecular sequence, which is fairly complex: when the mouse is infected with the intestinal worm, a “cytokine” molecule is produced. This cytokine then stimulates B-cells in the lymph nodes to produce a molecule called a lymphotoxin. The lymphotoxin then interacts with the cells that form the foundation of the actual lymph node – the so-called “stromal cells”. The stromal cells then produce another cytokine, which stimulates the production of new follicles in the lymph node.

Until now, formation of new B-cell follicles in the lymph nodes was thought to only happen just after birth. This study provides the first detailed evidence to show that this phenomenon can take place in an adult mammal. The researchers also showed that formation of new follicles is important for fighting infection, as it encourages the production of more antibodies.

Unlike bacterial or viral infections, worm infections are enormously complex. “Worms are large creatures that produce a host of their own molecules upon infection,” says Nicola Harris. “Some of these molecules stimulate the host’s immune system while some others suppress it. The field is investigating every one of these molecules, but it is slow work.”

It must be noted that the new production of B-cell follicles has only been confirmed in worm infections. “We did not see the same effect with bacterial infections in mice,” says Nicola Harris. “Nonetheless, we are pursuing a deeper understanding of this process to see if it is involved in producing adequate antibodies in response to vaccines.”

This work was lead by Nicola Harris’s lab at EPFL’s Global Health Institute, and included contributions from the Institute of Immunobiology of Kantonsspital St. Gallen and the Center for Immunity and Infection at the University of Lausanne. It was funded by the Leenaards Foundation (prize for Translational Medical Research).

The exact process by which uromodulin prevents inflammation had never been understood. Now an interdisciplinary team, drawn from three research groups at ETH Zurich together with researchers from the University of Zurich and the Children's Hospital Zurich, has filled this knowledge gap.

END_OF_DOCUMENT_TOKEN_TO_BE_REPLACED

Naked mole-rats can live for an incredibly long time and have an exceptional resistance to cancer thanks to unique conditions in their bodies that stop cancer cells multiplying.

END_OF_DOCUMENT_TOKEN_TO_BE_REPLACED

Researchers have isolated human monoclonal antibodies that potentially can prevent a rare but devastating polio-like illness in children linked to a respiratory viral infection.