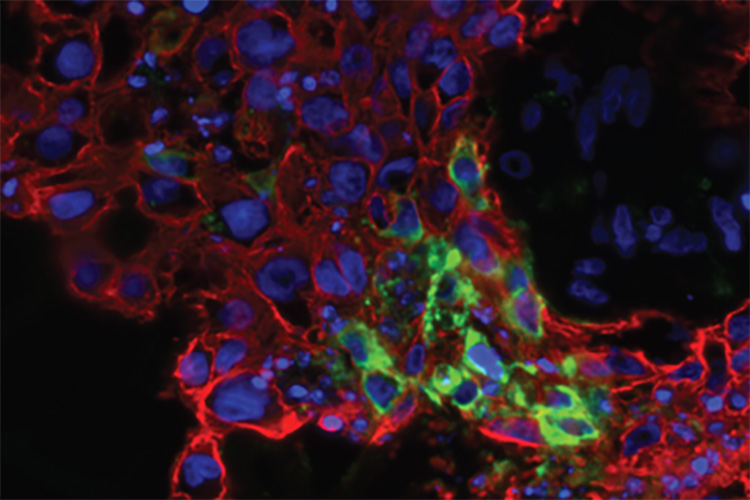 Zika virus can infect numerous cell types in the human placenta and amniotic sac, according to researchers at UC San Francisco and UC Berkeley who show in a new paper how the virus travels from a pregnant woman to her fetus. They also identify a drug that may be able to block it.

The virus has two potential routes to the developing fetus: a placental route established in the first trimester, and a route across the amniotic sac that only becomes available in the second trimester, according to the study, published Monday, July 18, 2016, in Cell Host & Microbe. The study of human tissue in the laboratory found that an older generation antibiotic called duramycin blocked the virus from replicating in cells that are thought to transmit it along both routes.

“Very few viruses reach the fetus during pregnancy and cause birth defects,” said Lenore Pereira, PhD, a virologist and professor of cell and tissue biology in the UCSF School of Dentistry. “Understanding how some viruses are able to do this is a very significant question and may be the most essential question for thinking about ways to protect the fetus when the mother gets infected.”

Duramycin is an antibiotic that bacteria produce to fight off other bacteria. It is commonly used in animals and is in clinical trials for people with cystic fibrosis. Recent studies have shown it to be effective in cell culture experiments against dengue and West Nile virus, which are flaviviruses like Zika, as well as filoviruses, like Ebola.

“Our paper shows that duramycin efficiently blocks infection of numerous placental cell types and intact first-trimester human placental tissue by contemporary strains of Zika virus recently isolated from the current outbreak in Latin America, where Zika virus infection during pregnancy has been associated with microcephaly and other congenital birth defects,” said Eva Harris, PhD, a professor of infectious diseases and vaccinology at the UC Berkeley School of Public Health. “This indicates that duramycin or similar drugs could effectively reduce or prevent transmission of Zika virus from mother to fetus across both potential routes and prevent associated birth defects.”

The virus infects several different placental cell types when examined in isolated cells and as intact tissue explants. These include cell types within the placenta and outside the placenta in the fetal membranes. The scientists found that the epithelial cells of the amniotic membrane surrounding the fetus were particularly susceptible to Zika virus infection.

“This suggests that these cells play a significant role in mediating transmission to the fetus and supports the hypothesis that transmission could occur across these membranes independently of the placenta, especially in mid and late gestation,” Pereira said. “The most severe birth defects associated with Zika infection – like microcephaly – seem to occur when a woman is infected in the first and second trimester. But there may be a range of lesser but still serious birth defects that occur when a woman is infected later in pregnancy.”

Zika virus also uses other receptors, including Axl and Tyro3, which are found in various placental cells. However, the investigators found that only TIM1 was strongly and consistently expressed in placental cell types throughout gestation.

TIM1 binds to phosphatidylethanolamine (PE), a membrane lipid present in the Zika virus envelope that is also present in dengue, West Nile and Ebola. Duramycin, a 19-amino acid cyclic small molecule, binds to PE in the virion envelope, and by doing so it can block these viruses from latching onto the TIM1 receptor to get into cells.

The scientists found that duramycin blocked infection of all the placental and fetal membrane cell types they tested, including cytotrophoblasts and amniotic epithelial cells, as well as chorionic villus explants. What’s more, the infection was substantially blocked at relatively low concentrations of the drug.