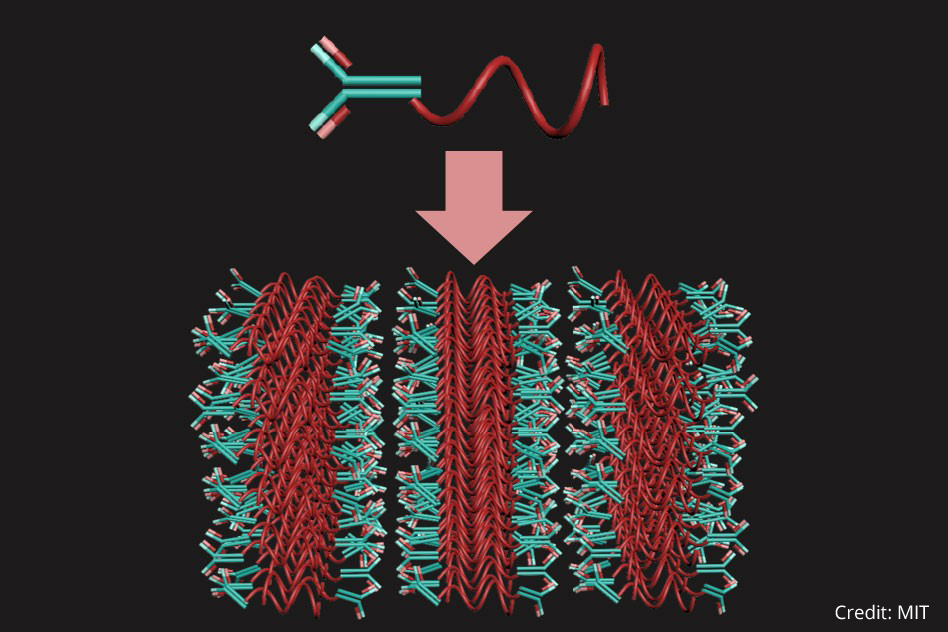 MIT chemical engineers discovered that they could force antibodies and other proteins to form layers by attaching each protein to a polymer tail. The proteins and polymers repel each other, so the molecules arrange themselves in a structure that minimizes the interactions between the protein and polymer segments.

Exploiting a process known as molecular self-assembly, MIT chemical engineers have built three-dimensional arrays of antibodies that could be used as sensors to diagnose diseases such as malaria or tuberculosis.

“The more antibodies you put on a surface, the lower the concentration of molecules you can detect,” says Bradley Olsen, an associate professor of chemical engineering at MIT. “You can have a big impact on biosensors by potentially improving the sensitivity by several orders of magnitude.”

Olsen is the senior author of the study, which appears in the journal Angewandte Chemie. The paper’s lead author is MIT postdoc Xue-Hui Dong, and former postdoc Allie Obermeyer is also an author.

The team’s new design approach relies on a phenomenon known as self-assembly, which occurs when thermodynamic interactions drive molecular building blocks to take on certain configurations.

In this case, the researchers discovered that they could force antibodies and other proteins to form layers by attaching each protein to a polymer tail. The proteins and polymers repel each other, so the molecules arrange themselves in a structure that minimizes the interactions between the protein and polymer segments.

Olsen and his colleagues attached each protein to a polymer chain known as a PNIPAM. When they coated a solution of these molecules onto a surface, the molecules formed a thin film containing between 10 and 100 layers of the protein-polymer structures.

“[The antibody] IgG has a complex structure,” Olsen says, “with four different molecules that are folded together in a very exquisite way.”

The traditional method for creating large arrays of antibodies on a surface is to chemically or physically bond them to the surface. However, this technique only creates a single layer of antibodies. A thermodynamic principle holds that the more antibody molecules there are on a surface, the lower the concentration of molecules they can detect. Therefore, stacking layers of antibodies on top of each other offers a way to dramatically improve the sensors’ sensitivity.

Using their new self-assembly strategy, the researchers created three-dimensional arrays of IgG antibodies, the main type of antibodies found in human blood. These densely packed arrays, which have the potential to be 100 times more sensitive than existing antibody sensors, also featured nanoscale channels that allow the sample to flow easily through the entire sensor.

“By controlling the location and density of the antibodies, this method will open up routes to higher sensitivity diagnostics compared to current methods, which randomly place the antibodies,” says Matthew Gibson, a professor of chemistry at the University of Warwick, who was not involved in the research. “This publication represents proof of principle, but the methods used are versatile and can be applied to most antibodies, and I would expect this work to make a significant impact in the field.”

Olsen is now working with Hadley Sikes, an MIT assistant professor of chemical engineering, to create sensors with antibodies specialized to detect pathogens from blood or urine samples. These types of sensors may also be useful one day for monitoring the health of pilots based on biomarkers found in their sweat or saliva.

Another avenue the researchers are now exploring is making arrays using proteins that are smaller than antibodies, which is a challenge because the thermodynamic force that drives self-assembly gets smaller as the protein size decreases.