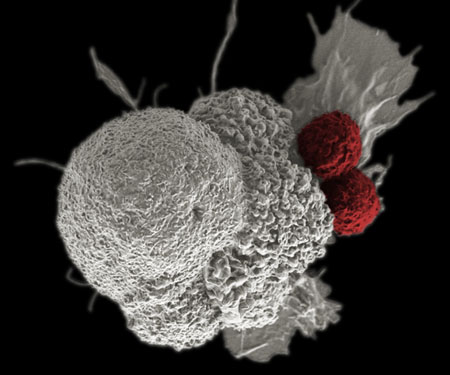 Researchers at University of California San Diego School of Medicine and Moores Cancer Center have identified a strategy to maximize the effectiveness of anti-cancer immune therapy. The researchers identified  a molecular switch that controls immune suppression, opening the possibility to further improving and refining emerging immunotherapies that boost the body’s own abilities to fight diseases ranging from cancer to Alzheimer’s and Crohn’s disease.

The findings are published in the September 19 online issue of Nature.

“Immunotherapies, such as T cell checkpoint inhibitors, are showing great promise in early treatments and trials, but they are not universally effective,” said Judith A. Varner, PhD, professor in the Departments of Pathology and Medicine at UC San Diego School of Medicine. “We have identified a new method to boost the effectiveness of current immune therapy. Our findings also improve our understanding of key mechanisms that control cancer immune suppression and could lead to the development of more effective immunotherapies.”

When confronted by pathogens, injury or disease, the initial response of the body’s immune system comes in the form of macrophages, a type of white blood cell that express pro-inflammatory proteins called cytokines that, in turn, activate T cells, another immune cell, to attack the health threat. The macrophages then switch gears to express other cytokines that dampen T cell activation, stimulating tissue repair.

In chronic inflammatory diseases such as Alzheimer’s and Crohn’s, however, macrophages associated with the malignancy continue to produce pro-inflammatory cytokines and other substances that kill or transform normal cells. In cancer, highly abundant microphages express anti-inflammatory cytokines that induce immune suppression, effectively stopping the healing process.

In the Nature paper, Varner and colleagues pinpoint a key, suspected player: an enzyme in macrophages called PI-3 kinase gamma (PI3Ky). In mouse studies, they found that macrophage PI3Ky signaling promotes immune suppression by inhibiting activation of anti-tumor T cells. Blocking PI3Ky activated the immune response and significantly suppressed growth of implanted tumors in animal models. It also boosted sensitivity of some tumors to existing anti-cancer drugs and synergized with existing immune therapy to eradicate tumors. Varner and her colleagues at the Moores Cancer Center also identified a molecular signature of immune suppression and response in mice and cancer patients that may be used to track the effectiveness of immunotherapy.

“Recently developed cancer immunotherapeutics, including T cell checkpoint inhibitors and vaccines, have shown encouraging results in stimulating the body’s own adaptive immune response,” said co-author Ezra Cohen, MD, who heads the cancer immunotherapy program at Moores Cancer Center. “But they are effective only on a subset of patients, probably because they do not alter the profoundly immunosuppressive microenvironment created by tumor-associated macrophages. Our work offers a strategy to maximize patient responses to immune therapy and to eradicate tumors. ”

The Nature paper builds upon other work by Varner and colleagues. In a paper first published online in May in Cancer Discovery, Varner’s team reported that blocking PI3Ky in tumor-associated macrophages stimulated the immune response and inhibited tumor cell invasion, metastasis and fibrotic scarring caused by pancreatic ductal adenocarcinoma (PDAC) in animal models.

In humans, PDAC is the most common malignancy of the pancreas It’s aggressive and difficult to treat. Though only the 12th most common type of cancer in the United States, pancreatic cancer is the fourth most common cause of cancer-related death.

“PDAC has one of the worst 5-year survival rates of all solid tumors, so new treatment strategies are urgently needed,” said Megan M. Kaneda, PhD, an assistant project scientist in Varner’s lab and collaborator on all of the papers.

In a December 2015 paper published online in Cancer Discovery, Varner and colleagues described animal studies that revealed how disrupting cross-talk between B cells (another type of immune cell) and tumor-associated macrophages inhibited PDAC growth and improved responsiveness to standard-of-care chemotherapy.

Specifically, that research team, which included scientists in San Francisco, Oregon and Switzerland, reported that inhibiting Bruton tyrosine kinase, an enzyme that plays a crucial role in B cell and macrophage functions, restored T cell-dependent anti-tumor immune response. In other words, it reactivated the natural, adaptive immune response in tested mice.