New Tool To Explore Mysteries Of The Immune System

New Tool To Explore Mysteries Of The Immune System

Why do some individuals infected with the West Nile virus develop life-threatening infections while others never know they had more than a mosquito bite? That medical mystery is just one of the questions that Ruth Montgomery, associate professor of medicine at Yale School of Medicine, seeks to explore with the use of a transformational tool for translational research.

It’s called CyTOF, which stands for cytometry by time-of-flight, and it gives researchers greater insight into the intricacies of immune cells than ever before. Established at Yale last year, the CyTOF tool is one of an estimated 90 in use by researchers and pharmaceutical companies around the world.

“It really offers some advantages,” said Montgomery, who directs Yale’s CyTOF facility at Yale School of Medicine. “Researchers who are eager to advance their discoveries are going to want to use the best technology they can.”

With the technology, researchers studying a range of conditions — from West Nile to multiple sclerosis to diabetes to cancer — can generate an unprecedented level of detailed data about cells from relatively small samples. The data helps them identify previously undetected cell subsets, deepening their understanding of cell biology and human disease.

Prior to the advent of CyTOF in 2009, scientists collected data about cell characteristics with an older technology known as flow cytometry. Using flow cytometry, researchers label cell components, such as surface markers or proteins, with flourescent probes attached to antibodies and pass those cells through lasers. When the lasers hit them, the fluorescent probes emit different wavelengths of light, which are detected by the cytometer and converted into readable data.

Flow cytometry allows researchers to use 8 to 10 fluorescently labeled markers — typically antibodies — to capture data about key cell features. By contrast, CyTOF employs a technique called mass spectrometry and rare earth metals instead of fluorescent compounds, so scientists can use about 40 markers (and up to 100 in the future). That translates into four to five times more information.

It’s akin to the difference between looking at the stars with a standard telescope versus an observatory-quality refractor telescope, according to Yale’s chair of neurology, Dr. David Hafler, who worked with Montgomery to bring CyTOF to Yale. “It allows me to go from seeing what’s on the cell’s surface, to defining function inside the cell very deeply,” he said. 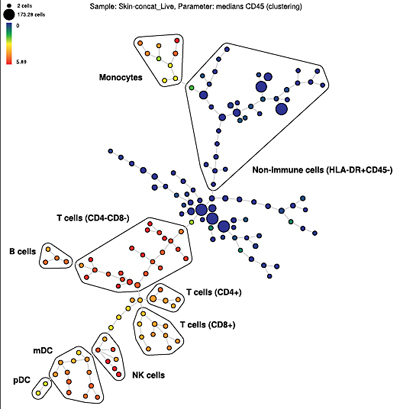 The search for cellular clues

In the CyTOF facility that she directs, Montgomery applies the technology to her study of how aging impacts the immune response to infections and autoimmune diseases. Along with Yale colleagues in internal medicine and immunobiology, she authored a paper published in the Journal of Immunological Methods in 2014 that demonstrated the technology’s ability to detect multiple signals from a sample of as little as 1,000-10,000 cells.

Specifically, she’s using CyTOF to explore the role of natural killer (NK) cells in the immune response to West Nile virus. “Right now we’re looking at NK cells from patients who had very severe West Nile virus and patients who never knew they were sick with West Nile virus, and we’re characterizing their NK cells,” she explains. With a panel of 40 markers, Montgomery and her colleagues have already been able to discern distinctions between NK cells derived from the two patient groups. The research may help explain differences in immune response to infection that could potentially benefit those most harmed by the illness, notes Montgomery.

Similarly, in his lab, Hafler applies CyTOF to the study of cellular complexities at the root of diseases such as a multiple sclerosis and cancer. In one current project, his team is investigating specific types of immune cells extracted from brain tumors. “We’re isolating T cells from brain tumors,” he explains. “We’re able to look at over 35 different functional molecules on the surface of T cells to define their function.”

Understanding how multiple molecules function at the same time in a single cell may reveal clues about how brain tumors manage to survive and thrive in spite of T cells, he said. “The more we can define how the tumor is evading the immune system, the more specific we can make the treatment. By looking at multiple markers, we can be more precise in defining the therapy moving forward.”

Eye on immune therapies and prevention

In his lab, professor of immunology Dr. Kevan Herold has used the technology to explore key questions about type 1 diabetes, an autoimmune condition. CyTOF is helping his team get more data about a limited repertoire of cells specific to type 1 diabetes, which typically appears during childhood.

“We want to understand the targets of the cells that cause diabetes,” he said. “What turns them on? What turns them off? Are there pathways involved that we can target for therapies? Those are the types of questions we’re interested in.”

The goal is not only to develop immune therapy to treat type 1 diabetes but potentially to use the data for prevention. “There are antigen-reactive T cells that are found in individuals at risk for type 1 diabetes,” said Herold. “Some of those individuals go on to develop diabetes; others don’t. What we want to do is figure out who is going to go on to develop diabetes in order to prevent it.” If he identifies a marker that differentiates between patient types, for example, that finding could point to a target for preventive strategies, notes Herold.

The work of Montgomery, Hafler, and Herold may be just the tip of the iceberg. With this more powerful tool for analyzing cells, Yale scientists now have the ability to deeply analyze and profile whole populations of immune cells for the study of cancer and other complex diseases. Their discoveries will contribute to the growing number of peer-reviewed studies involving CyTOF, and the immune therapies that emerge.

“We tend to think of our analyses of cells as uni-dimensional or bi-dimensional. This now is 40-dimensional,” said Herold. “This approach, where you have many parameters, is probably going to redefine populations of T cells. It will enhance how we view the immune repertoire.”