Platelets are the Pathfinders for Leukocyte Extravasation During Inflammation

Platelets are the Pathfinders for Leukocyte Extravasation During Inflammation 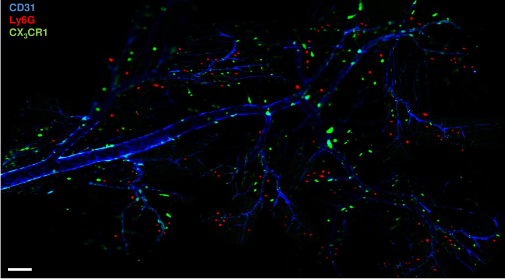 Interactions of neutrophils (red) and iMOs (green) with endothelial cells (blue) were analyzed in the microvasculature of the cremaster muscle of CX3CR1GFP/+ mice by multichannel in vivo microscopy (A; scale bar 100 μm)

A previously unrecognised role of platelets as the pathfinders for leukocyte extravasation during inflammation has been reported in PLOS Biology1.

Using a combination of in vivo video imaging, confocal microscopy and flow cell cytometry on platelets, neutrophils, monocytes and their associated signalling molecules, researchers from the University of Munich have systematically studied and demonstrated the complex cell-cell and molecular interactions which take place in the microvasculature of a mouse muscle inflammation model.

The movement of leukocytes (white blood cells) from the bloodstream to the surrounding tissue (extravasation) is a prerequisite for effective immune responses. To enter a site of inflammation, leukocytes “roll” on the luminal surface of microvascular endothelial cells then stabilize and adhere to the inner vessel wall in order to find their way to extravasation ‘hot spots’.

Zuchtriegel et al. found that upon onset of an inflammatory response, platelets immediately adhere to specific sites in micro vessels and capture intravascularly crawling neutrophils via CD40-CD40L/CD154-dependent interactions. Adherent platelets and neutrophils then cooperatively recruited monocytes to these “hotspots” through aCD40-, CD40L/CD154-, and L-selectin/CD62L-mediated association.

The researchers systematically screened candidate adhesion molecules for their functional relevance in mediating interactions of platelets with endothelial cells and neutrophils during inflammation. They found that the cellular crosstalk from these interactions led to an activation of surface-expressed leukocyte integrins, which subsequently promoted the successive extravasation of neutrophils and monocytes from these ‘hot spots’ into the interstitial tissue.

The research conducted to fully understand this mechanism might now provide therapeutic targets for the prevention and treatment of inflammatory pathologies.