Researchers have created a new method for screening cells used in immunotherapy cancer treatments, allowing high-performing immune system cells to be studied in isolation and potentially expanding the number of patients for whom the breakthrough treatment proves successful.

Engineers from the University of Houston, working with physicians from the University of Texas M.D. Anderson Cancer Center, describe the method – Time-lapse Imaging Microscopy in Nanowell Grids, or TIMING – and its ability to more accurately analyze large numbers of cells for use in the cancer therapy.They also demonstrated its potential in research evaluating how effective various types of T cells – a type of white blood cell key to fighting infection – are in killing cancer cells. 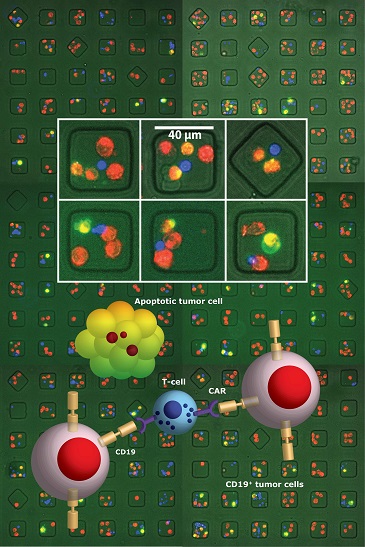 “This is a case of biologists, clinicians and computer scientists coming together toward a common purpose,” said Badri Roysam, chairman of the UH Department of Electrical and Computer Engineering and lead author of the Bioinformatics paper.

He and Navin Varadarajan, assistant professor of chemical and biomolecular engineering at UH, collaborated with M.D. Anderson’s Laurence J.N. Cooper on the research, along with a number of other UH researchers.

Clinical studies have reported life-saving results from cancer immunotherapy, a biological therapy which uses the immune system – or specific cells of the immune system – to fight cancer. But they don’t work for everyone, not even everyone with one of the cancers for which the treatments have proven most successful.

TIMING could change that by allowing researchers to study many more interactions between immune cells and cancer cells, thanks to its ability to automatically analyze thousands of cell interactions at a time. Conventional analysis is done manually, the researchers said, making it impossible to study every combination.

Most conventional methods assess a limited number of samples from a test – between 10 and 100, compared with the 10,000 or even 100,000 samples that can be assessed with the new method, according to the paper. That matters, the researchers wrote in Bioinformatics, “since many biologically significant cellular subpopulations like tumor stem cells, multi-killer immune cells and biotechnologically relevant protein secreting cells, are rare.”

TIMING works like this: A nanowell grid – an expandable structure – allows discrete samples of immune cells and cancer cells to be confined and studied over time, via time-lapse video recording.

“We’ve developed a game-changing piece of software that can accurately analyze an entire grid of nanowell videos and make quantitative measurements,” Roysam said.

It is essentially, he said, “the combination of a supermicroscope and a supercomputer to screen cell-cell interactions on a large scale.”

"The proposed algorithms dramatically improved the yield and accuracy of the automated analysis to a level at which the automatically generated cellular measurements can be utilized for biological studies directly, with little/no editing,” the researchers wrote.

Varadarajan said the system allows “high-performing outliers” to be identified for further research. Several types of immune cells were used, including T cells, CAR cells – T cells modified with chimeric antigen receptors, which allow them to hone in on and kill cancer cells –and what are known as NK or “natural killer” cells, which can detect tumors without modification. Researchers used both leukemia cells and melanoma cells in their testing.

“If you know the best cells (to fight a particular cancer), it just becomes a manufacturing problem,” Varadarajan said. “But right now, we don’t always know which cells are the best.”

Using the TIMING system, the researchers have deepened the scientific understanding of immunotherapy, including how different types of T cells function against cancer cells. As a result, they demonstrated for the first time at a single-cell level that CD4 T cells directly participate in the killing of multiple tumor cells.

CD8 T cells are known for their tumor-fighting properties, but Varadarajan said the finding, published in Cancer Immunology Research, suggests that CD4 cells also would be effective. Research on this question is ongoing.