The immune system not only responds to infections and other potentially problematic abnormalities in the body, it also contains a built-in brake in the form of regulatory T cells, or Tregs. Tregs ensure that inflammatory responses don’t get out of hand and do damage. In autoimmune diseases, sometimes these Treg cells don’t act as they should.

A new study led by Songtao Shi of the University of Pennsylvania has demonstrated how Tregs can themselves be regulated, by an unexpected source: hydrogen sulfide, a gas produced by the body’s muscle cells and one often associated with the smell of rotten eggs. Shi is professor and chair of the Department of Anatomy and Cell Biology in Penn’s School of Dental Medicine.

Traditionally, scientists have thought of signaling pathways as entailing a ligand binding to a receptor. But gases can also trigger signaling cascades in the body. The best known is nitric oxide, or NO, which regulates a host of functions, notably blood pressure. Carbon monoxide is another so-called “gasotransmitter.” 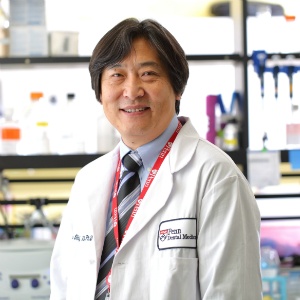 Though less is known about it, researchers have also come to understand that hydrogen sulfide gas plays a suite of important roles in the body as well. Reduced levels of H2S have been associated with immune disorders, cancer and hypertension.

“H2S is very interesting,” Shi said. “High levels of it are toxic, but our body maintains it at a certain level and our cells produce it.”

In an earlier study, Shi and colleagues had found that mesenchymal stem cells produce and rely on H2S for proper functioning. In the course of that study, they noticed that mice with reduced levels of H2S had problems consistent with autoimmune disease.

To see if they could pinpoint the role of the gas in immune regulation, the research team examined Tregs in culture and found that they, too, produce H2S. Mice bred to produce reduced levels of H2S had abnormally low numbers of Tregs and, as a result, developed autoimmune disease that affected multiple organs. Giving these mice compounds that release H2S partially alleviated these effects, and the animals lived longer.

Next, the team wanted to find out more about the mechanism by which H2S acted on the immune system. They had already observed that H2S-deficient T cells had lower levels of a Treg marker called Foxp3, but H2S did not seem to affect the actors of a known pathway by which Foxp3 is produced. So they hypothesized that H2S might act in another, as-yet-uncharacterized pathway to regulate Foxp3 expression.

Through a series of experiments, they began to unravel the pathway. They observed that mice with reduced H2S production had large numbers of methyl groups on the Foxp3 gene, tags which repress the gene’s expression. It was already known that demethylation of Foxp3 can occur through two enzymes called Tet1 and Tet2, which Shi describes as being the center of “a hot area of research right now.”

Their work revealed that H2S regulates the expression of Tet1 and Tet2 by modifying a transcription factor called NFYB by adding a sulfur atom to it, a process called sulfhydration. Reducing H2S levels led to reduced expression of Tet1 and Tet2 in T cells and, consequently, impaired function and development of Tregs. Again, the researchers showed they could partially reverse these effects by adding back a source of H2S.

“This is the first time anyone has connected sulfhydration with Tet and Tet with Foxp3,” Shi said. “It’s becoming clear that H2S has a very important role to play in immune regulation.”

Shi and his team are continuing to examine how H2S operates in the context of both stem cells and T cells and are looking, too, to see whether it plays critical roles in other cell types. They’re also following up on the current work to identify ways to intervene when H2S levels fall in order to prevent autoimmune problems.

“There are a lot of different ways to rescue this problem,” Shi said.