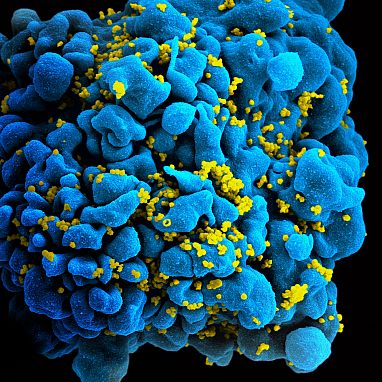 The HIV virus, which causes AIDS, and the similar monkey virus SIV usually cause permanent infections once established in the body. Antiretroviral therapy (ART) can suppress these viruses to very low levels in the blood. Yet the virus still lurks in the genetic material of infected immune cells, known as viral reservoirs. If ART is discontinued, virus levels rebound within weeks. Thus, treatment for HIV today involves taking ART every day for life. Although ART dramatically improves health overall and prolongs life, the regimen can be challenging and may have toxic side effects over time.

A team led by Dr. Aftab A. Ansari at Emory University and Dr. Anthony S. Fauci, director of NIH’s National Institute of Allergy and Infectious Diseases (NIAID), investigated whether preventing CD4 cells from accessing gut tissues could avert the damage and its effects on the immune system. The researchers developed an antibody against alpha-4/beta-7 integrin to block it from interacting with MAdCAM-1. Their study appeared on October 14, 2016, in Science.

The scientists infected 18 rhesus macaques with SIV. Five weeks later, the animals began a 90-day course of daily ART. Nine weeks after infection, the animals started receiving an antibody infusion every 3 weeks. Eleven were given the investigational antibody; the other 7 received placebo antibody. Three of the 11 monkeys developed an immune response against the investigational antibody and were excluded from further study. All treatment ceased 32 weeks after infection for the 15 remaining animals.

By their third week on ART, all the monkeys fully suppressed SIV. Within 2 weeks after ART ceased, SIV rebounded to high levels in all 7 control animals. SIV returned temporarily but was then subdued in 6 of the 8 monkeys who received the investigational antibody. The virus never rebounded in the other 2. These 8 monkeys have continued to have undetectable levels of SIV in their blood and gut tissues for as long as 23 months.

How the antibody treatment is working remains unclear. Treated monkeys had replenished CD4 levels. They had other notable immune changes. For example, some treated animals developed antibodies against an important region of gp120, a protein that HIV and SIV need to grip and gain entry to CD4 cells.

“The experimental treatment regimen appears to have given the immune systems of the monkeys the necessary boost to put the virus into sustained remission,” Fauci says. “The precise mechanisms of this effect are unclear and will be actively pursued, since they could have important implications for the control of HIV infection in humans.”