Karen Steward holds a PhD in molecular microbiology and evolutionary genetics from the University of Cambridge. She moved into science writing in 2017 after over a decade as a research scientist.
Learn about our editorial policies
News

Despite ongoing efforts to develop an effective vaccine against SARS-CoV-2, little is known about the efficacy and longevity of the immune response, both humoral and cellular, following SARS-CoV-2 infection or vaccination. Research studies exploring the human immune response are therefore necessary to plug such knowledge gaps. 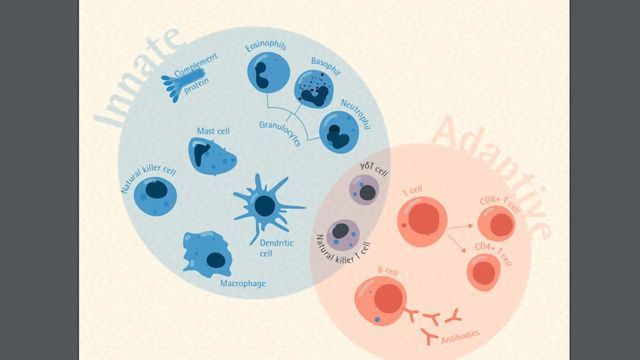 END_OF_DOCUMENT_TOKEN_TO_BE_REPLACED

The study consisted of a cohort of 100 individuals who had tested sero-positive for SARS-CoV-2 infection during March or April 2020. That is, individuals who were found to have antibodies against SARS-CoV-2 in their blood. The group had a median age of 41.5 years (range 22 – 65 years) and were 77% female, 23% male. None of the participants required hospitalization during infection, with 56 classified symptomatic and 44 asymptomatic.

Serum samples were taken at monthly intervals for six months following infection for anti-SARS-CoV-2 antibody surveillance and a blood sample taken for cellular analysis (T-cell responses) six months from the point they tested PCR positive for the infection. Multiple aspects of the T-cell response were measured, including the cellular subsets present, the overall magnitude of response and response to different SARS-CoV-2 proteins.

Reasons to be cheerful?

T-cell responses were identified in all 100 individuals six months post-infection, with a median response level for those having experienced symptomatic infection measuring 50% higher than asymptomatic individuals. This indicates a robust cellular memory against SARS-CoV-2 for at least six months, with disease severity playing some part in the residual cellular response. T-cell responses to multiple viral proteins, including the spike and nucleoprotein/membrane proteins were also identified. This is positive news for vaccine developers, many of whom are targeting the spike protein. The measured responses to other proteins – in addition to the spike protein – provide data for further potential candidates for vaccine inclusion. CD4+ T cells were found to predominate the cellular response, with IL-2 the major cytokine present, both of which the authors concluded could bode well for long-term immune memory.

Taken together, this evidence of a sustained cellular immune response in the face of declining antibody levels highlighted by a number of studies is positive news for the future outlook. Paul Morgan, professor of Immunology and director of the Systems Immunity Research Institute, Cardiff University commented, “This is an important manuscript, building on a number of published studies that demonstrate T-cell responses to SARS-CoV2 and showing that T-cell responses occur even following mild or asymptomatic infections and persist for at least six months. These findings increase confidence that SARS-CoV2 infection can induce robust T cell immunity, at least in this relatively young, mild/asymptomatic disease cohort, and that this immunity persists even when antibody levels are falling. The authors make a strong case for measuring T-cell immunity more widely and for including this in assessments of response to vaccines as these become available.”

The single measurement of T cells at six months post-infection was, however, identified as a weakness in the sampling strategy by Eleanor Riley, professor of Immunology and Infectious Disease at the University of Edinburgh: “Without an earlier measurement – ideally three-four weeks after acute infection – we can’t be sure what the peak of the T-cell response might be or how quickly it is falling. However, studies conducted elsewhere at earlier time points post-infection are consistent with the data presented here.”

In the paper, the authors conclude that their findings “demonstrate that robust cellular immunity against SARS-CoV-2 is likely to be present within the great majority of adults at six months following asymptomatic and mild to-moderate infection".

They continue "These features are encouraging in relation to the longevity of cellular immunity against this novel virus and are likely to contribute to the relatively low rates of reinfection that have been observed to date".

Whilst these results are encouraging for the potential success of a future vaccination program and prevention of reinfection more generally, Professor Riley had words of caution. “It is not necessarily correct to say that this is evidence of T-cell “immunity”. Immunity is a functional term that implies resistance to infection, and this has not been directly shown in this study. Determining whether these T-cell responses are protective against reinfection would require either an experimental infection study (such studies are under active discussion) or a very large, long-term study to assess the frequency of reinfection in people whose T-cell responses have been measured. Given the apparently very low incidence of reinfections at the current time, such a study would not currently be a high priority. But if our worst fears are realized, and reinfection turns out to be a significant problem, then such studies would help to identify “correlates of protection” – immunological markers of protection versus susceptibility to reinfection.”

This was echoed by Brendan Wren, professor of Microbial Pathogenesis at the London School of Hygiene & Tropical Medicine. “If cellular immunity is a good correlate of protection to re-infection, this provides encouraging data for long-term immunity to SARS-Cov-2 and the development of effective vaccines – however this study cannot tell us whether people are protected from re-infection, so we still need more data first.”

A work in progress

These results are encouraging but there is still clearly much work to be done, including in patients who suffered severe disease. Arne Akbar, professor of Immunology at University College London and president of the British Society for Immunology commented, “This pre-print study looks into COVID-19 immunity six months after asymptomatic and mild/moderate infection and does not investigate patients with severe disease. It will be important to investigate the durability of this protection by T cells beyond the six-month mark, as well as how it may be different in patients with severe COVID-19.”