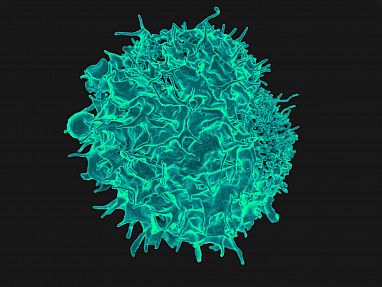 The immune system has a variety of cell types that act in unison to protect the body from invading microbial threats. B cells, for example, produce specialized molecules called antibodies that attack harmful microbes. Autoimmune diseases arise when this complex system mistakenly attacks the body’s own tissues.

In people with pemphigus, the cells in the top layer of the skin and the mucous membranes come under immune attack. The immune system mistakenly produces antibodies against proteins known as desmogleins. These proteins help keep skin cells attached and the skin and mucous membranes intact. When desmogleins are attacked, the cells separate from each other and fluid collects in the spaces, forming blisters. The most common type of pemphigus in the United States is pemphigus vulgaris. It arises when B cells make antibodies to desmoglein-3 (Dsg3, also known as keratinocyte adhesion protein).

Pemphigus can be treated with drugs that suppress the immune system or that specifically deplete B cells. However, these approaches can leave the body vulnerable to deadly infections. A team of researchers led by Drs. Aimee S. Payne, Michael C. Milone, and Christoph T. Ellebrecht at the University of Pennsylvania aimed to develop a more selective technique by adapting an emerging approach used to fight cancer. In that approach, immune system T cells are collected from patients and genetically engineered to produce special receptors on their surfaces that recognize a specific protein on tumor cells and attack the cancer.

In pemphigus vulgaris, B cells make specialized receptors that recognize and target the Dsg3 protein. The researchers reasoned they could genetically engineer T cells to express portions of Dsg3, and thus specifically destroy the miscreant B cells without affecting the rest of the immune system. Their work was funded in part by NIH’s National Institute of Arthritis and Musculoskeletal and Skin Diseases (NIAMS). Results were published in Science on July 8, 2016.

With further development, this approach could potentially be used for any autoimmune disease caused by misdirected antibodies. “Our study effectively opens up the application of this anti-cancer technology to the treatment of a much wider range of diseases, including autoimmunity and transplant rejection,” Milone says.

The team is now planning to test the approach in dogs, which can also develop pemphigus vulgaris. “If we can use this technology to cure [pemphigus vulgaris] safely in dogs, it would be a breakthrough for veterinary medicine, and would hopefully pave the way for trials of this therapy in human pemphigus patients,” Payne says.