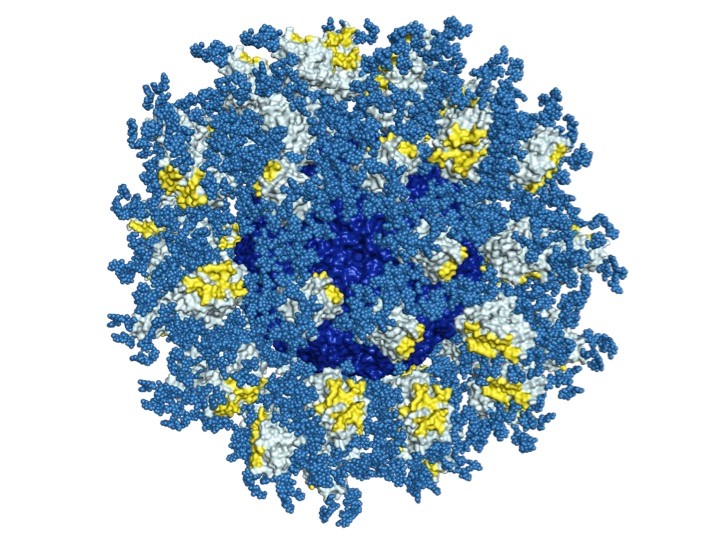 New approaches that could spur the human body to produce HIV-blocking antibodies have been successful in mice mimicking the human immune system, according to five studies published today in the research journals Cell, Immunity and Science.

“It’s early work, but we’re trying to rewrite some rules of vaccine development to overcome the extraordinary challenges of HIV,” says William Schief, TSRI Professor and Director of Vaccine Design for IAVI’s Neutralizing Antibody Center (NAC) at TSRI. “In a collaborative effort we have reached critical milestones, including the first proof ever that immunization with designer proteins can produce broadly neutralizing antibodies against HIV. The new results strongly support further developing these approaches toward testing in clinical studies.”

Do better than nature

HIV circulates in a person’s body in many variants that mutate rapidly and escape defensive immune responses. Since the virus attacks the very immune cells that are supposed to fight it, and it hides in persistently infected cells, capable of re-emerging and striking at any time, traditional vaccine strategies have failed to work against HIV. New approaches are needed to develop a broadly effective AIDS vaccine.

In laboratory and animal testing, broadly neutralizing antibodies (bNAbs) have been shown to prevent or control infection from a wide range of HIV variants. Many researchers believe bNAbs are a critical component of future broadly effective AIDS vaccination. However, developing these vaccines will require scientists to do better than nature as only 10% to 20% of people living with HIV develop bNAbs, and such a process can take years to happen. Expanding on earlier work, the new studies have taken further critical steps to show that it could be possible to actually coax the human immune system to create bNAbs against HIV.

The researchers tested the efficacy of immune system training that combines a prime shot with an immunogen (the active ingredient of a vaccine) to activate bNAb precursor cells (germline B cells) with booster shots of other immunogens that trigger mutations in the antibodies until they mature into bNAbs. They did this in mice whose immune systems mimicked components of the human immune system, testing for different challenges that immunogens would have to overcome. They aimed at generating two classes of bNAbs (VRC01 and PGT121) as it is believed that neutralizing a wide range of HIV variants will require more than one type of bNAb.

A study published in Science expanded earlier results achieved with a promising prime immunogen (eOD-GT8 60mer, a nanoparticle composed of 60 units of an engineered version of the HIV envelope protein’s outer domain) in a more human-like and challenging mouse model. Dennis Burton, Scientific Director of IAVI’s NAC at TSRI and Chair of TSRI’s Department of Immunology and Microbial Science, Schief and colleagues at TSRI, Ragon Institute, MIT, HMS and Kymab Ltd, administered the immunogen to mice (Kymouse™) engineered to express human antibodies, but to express precursor B cells for the VRC01 bNAB in a much lower concentration than found in humans. Nonetheless, the mice were successfully primed to have the type of immune response a vaccine should induce in humans, demonstrating the immunogen’s strong priming effectiveness.

In another study, published in Cell, and conducted by Schief, Burton, TSRI Professor David Nemazee and their colleagues at IAVI’s NAC, TSRI, Ragon Institute, MIT and HMS, mice engineered to make precursors of VRC01 bNAbs were primed with the eOD-GT8 60mer and boosted with two other immunogens. The elicited antibodies shared many genetic features with mature bnAbs and had the ability to neutralize one native HIV isolate as well as multiple slightly modified HIV isolates. The boosters seem to have guided the antibody-producing B cells to mutate in the right direction. The researchers now think that additional boosters are needed to complete the bNAb maturation.

A second study published in Cell succeeded with a similar approach. They showed that a series of priming with the eOD-GT6 60mer immunogen (an earlier version of the eOD-GT8 60mer) and boosting with different modified HIV envelope proteins could induce antibodies with properties of partially mature bNAbs in mouse models with immune systems that can create an even wider range of antibodies. This study was conducted by John Mascola at the NIAID’s Vaccine Research Center and Frederick Alt, a HHMI researcher at Boston Children’s Hospital and Harvard Medical School, along with colleagues at IAVI’s NAC at TSRI, TSRI, Vanderbilt University, Columbia University, Ragon Institute, FHCRC and Duke University School of Medicine.

With a third study published in Cell and another published in Immunity, Schief, Michel Nussenzweig and teams at IAVI’s NAC, TSRI, HHMI, The Rockefeller University and Ragon Institute demonstrated the ability of different prime and booster immunogens to induce the generation and full maturation of a PGT121 bNAb that neutralized diverse HIV isolates in another mouse model. This is the first proof ever that immunization with a series of prime and booster shots using designer proteins can produce bNAbs against HIV. This work is also novel in that it suggests a way to induce bNAbs that bind sugar molecules that shield HIV from antibody attack. Many bNAbs that develop during natural infection bind at least in part to the sugar coating, but it has not been known until now how to develop immunogens to induce this kind of response through vaccination.

Taken together, these results offer encouraging insights and proof points for a planned Phase I clinical trial by IAVI to test the eOD-GT8 60mer prime and to further develop booster immunogens and test their ability to elicit bNAbs in humans in future trials. And, the work on PGT121 vaccine development and testing in a mouse model has encouraged the researchers to further develop their approach to get it ready for clinical studies.