"Uber for Academics" Announces a Blockchain Token for Science

Ruairi is a senior science writer at Technology Networks. He holds a Master's degree in clinical neurosciences from the University of Cambridge and has written for Technology Networks since 2018.
Learn about our editorial policies
CreditL Peerwith

Blockchain payment systems are in vogue right now. New blockchains, which include cryptocurrencies, seem to be appearing on an almost daily basis and are achieving a varying level of fame (notoriety?) such as the stock market darling turned burst-bubble Bitcoin to the downright strange, meme-inspired Garlicoin. Entering into this uncertain market is PeerScienceCoin (PSC), a token system that has a grand aim: to standardize and secure payments for scientific services.

It calls itself “Uber for academics”.

Just like Uber, Peerwith must carefully ensure that payments between its clients and experts go smoothly. It has hitherto relied on PayPal for this purpose, but the announcement of PSC opens new possibilities for the company.

What is a blockchain?
A blockchain is a constantly lengthening list of records (blocks), which are all linked (or chained) together. They are typically secured using cryptography. Each block contains a cryptographic algorithm that encodes the previous block, a timestamp, and data on the transaction - in this case, a transaction between an expert and a client. In applications such as cryptocurrencies, the blockchain is used as a way of recording all transactions made using the currency securely and permanently.

Ivo Verbeek, Peerwith’s Co-Founder and Director, says the introduction of PSC is primarily driven by a desire for more flexible and efficient payments: “The way we have set it up now is less efficient in the sense that we have to charge a minimum service fee of $20, which makes it impossible to do smaller transactions below that amount. With PSC the cost-per-transaction will be almost zero, so we can skip the minimum fee.”

Furthermore, the introduction of PSC allows Peerwith to shed its reliance on PayPal and bank transfers. In a recent blog post, Verbeek says he wants to improve the service’s value in countries where accessing USD is a difficult task, such as Iran or Indonesia, which Verbeek says are important markets for Peerwith. 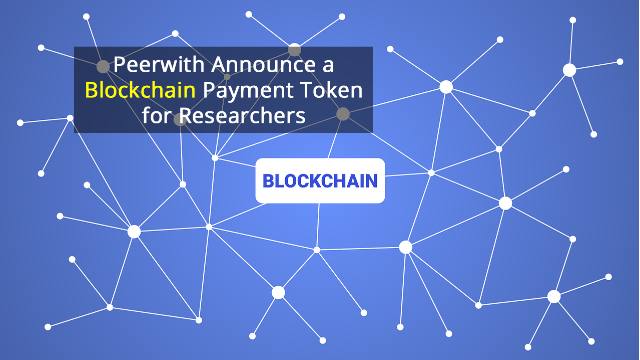 A Bitcoin for Science?

END_OF_DOCUMENT_TOKEN_TO_BE_REPLACED

The changes are eagerly awaited by both the experts providing services on the platform, and the researchers who use them. Tony Ferrar, a former research technician at the Centre for Genomic Regulation (CRG) in Barcelona and now a full-time Peerwith expert, is optimistic that PSC can improve how Peerwith works: “I think the PeerScienceCoin will be advantageous for both the experts and the clients. The whole process will be much faster, and I think it will resolve a lot of issues for institutions, where the clients are different from the individuals who pay for the services.” Ferrar highlights a point that Verbeek has also touched on – that providing services for academics who are funded by their department or chief investigator is not as simple as paying for a ride in a taxi: blockchain tokens have the potential to simplify this complicated system of payments. Verbeek hopes that PSC will be adopted by clients and their institutions: “We expect institutions to buy PSC and to distribute these to researchers off-platform, for example via email. Then, the researcher uses PSC to make a payment on the marketplace. So, we need the blockchain for PSC to also be applicable outside the Peerwith marketplace, in order to come back in later.”

The Spread of a Science Blockchain

The real potential of a token like PSC lies in its ability to spread beyond its initial user base – if it can grow outside the confines of the Peerwith platform it could fill a void for flexible, transferable currency in science. Verbeek addressed this ambitious goal in another blog post: “PSC could also be used as a token given by publishers to researchers. A kind of gift card,” writes Verbeek. “For example, some publishers might want to reward researchers for certain services, such as performing peer review or being part of an editorial board. Or even taking part in a survey or completing a course. They could do this by giving them tokens, which researchers then use to purchase other services on Peerwith, or to pay Article Processing Charges (APCs).”

Whether or not the token can move beyond its origin as an editing payment service amongst Peerwith’s user base will determine whether PSC can go from being a useful tool to a science-wide currency. If this is PSC’s ultimate goal, it is entering a crowded market – blockchain initiatives targeting scientists have spread rapidly in the eight months since ScienceRoot, advertised as the first blockchain-based scientific ecosystem, was founded. What Verbeek and Peerwith are counting on is that their established userbase will help them overtake the competition: “The big advantage of Peerwith over these platforms is that Peerwith is already handling many transactions on a daily basis.” If they can achieve that goal, Peerwith will add value to scientific blockchaining’s vogue.

Complete the form below to unlock access to this Audio Article: " "Uber for Academics" Announces a Blockchain Token for Science"