Could COVID-19 Usher in a Digital Future for Healthcare?

Could COVID-19 Usher in a Digital Future for Healthcare?

Complete the form below and we will email you a PDF version of "Could COVID-19 Usher in a Digital Future for Healthcare?"

Over the last 18 months, the UK National Health Service (NHS) has been hit hard by the COVID-19 pandemic. Over 470,000 COVID-19 patients have been admitted to hospital. At the peak of the pandemic’s second wave in January, over 4,000 patients required mechanical ventilators to breathe. With nearly 130,000 deaths from COVID-19 recorded in the UK, future inquiries into the handling of the pandemic will revolve around why so many people died in a nation that ranked extremely highly on the 2019 Global Health Security (GHS) Index and what steps can be taken to prevent loss of life on this scale in the future.

Could a more digitized, data-centric NHS have saved lives? A new study examining how patients were treated over the first wave of the pandemic has shown how machine learning-based methods could transform how standard NHS care is conducted.

Led by researchers at Imperial College London, the study collected data from 18 different intensive care units (ICUs) from across the NHS, aggregating data from over 600 ICU patients. While previous studies of this scale had collected patients’ admission data, the new paper, published in Intensive Care Medicine, had a more ambitious goal. Professor Aldo Faisal, of Imperial College London’s Department of Computing and Department of Bioengineering, was senior author on the paper. “Unlike all previous studies we looked at the patients’ data – their heart rate, blood pressure – not just on day one, but twice daily for every day they stayed in ICU till they died or survived and were discharged,” Faisal tells Technology Networks.

This type of analysis is so rare because of the huge amount of data generated over the period a patient stays in the ICU, and also because hospitals aren’t exactly standardized in their tracking of such data. Faisal explains that while some institutions in their analysis kept electronic health records (EHRs) to track their patients, other ICUs were nowhere near as organized. 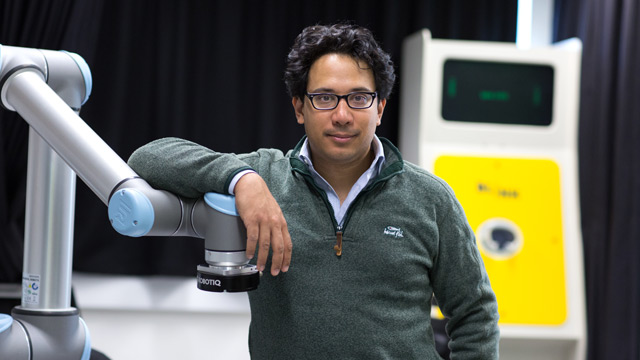 “These hospitals without electronic records didn't even know how many patients died, or which treatments were applied, and had no picture of their situation,” says Faisal. To allow tracking, the team built an easy-to-use interface that allowed analogue hospitals in the trial to input detailed data on their ICU patients, even if just by hand.

This interface allowed the Imperial team to build up a picture of not only the patients’ physiology, but how they were treated by different ICUs and what their outcomes were. Faisal says that the team saw “considerable variation” in how patients were treated. One of the biggest risks to critically ill COVID-19 patients comes from the damage the disease wreaks on their lungs. To help patients breathe better, ICUs have a range of treatment strategies. One of the most common approaches was “proning”, where the patient is physically flipped onto their stomach to help their lungs access oxygen. But in analyzing the ICU data, Faisal’s team noted that a large proportion of patients didn’t gain any clinical benefit from proning. “That is important, because if a doctor prescribes proning, they typically wait three or four days to try something else,” says Faisal. Faisal’s team were able to feed data into a machine learning algorithm that could work out what patient characteristics would predict proning success or failure – data that could help doctors bypass proning for patients who would likely gain no benefit.

The findings are especially important for a standard hospital technique like proning practice. “Proning is such a straightforward thing,” explains Faisal, “that you usually would not run a clinical trial like you would do for bringing in a new COVID drug to test if the drug works or not. It's a bit like when you have an appendicitis. No one will run a trial to see what happens if you don't cut out the appendix in an appendectomy because it's simply too risky not to do it.” The team showed that patients who had a raised respiratory and cardiovascular component of their sequential organ failure assessment (SOFA) score, a standard ICU clinical prediction tool, were less likely to respond positively to proning.

How to design a healthcare algorithm

The Imperial team’s algorithm used a technique called SHapley Additive exPlanations (SHAP) to work out what parameters were the most important for predicting ICU survival. This involved first looking at all the data provided by healthcare staff, and then removing individual parameters to see what effect it had on the algorithm’s performance. Using this technique, the teams were able to identify important parameters that might be missed using analysis of just admission data. For example, patients’ lactate level was relatively unimportant on day one, but became a much better predictor of whether patients would survive over their first week in ICU.

The algorithm also allowed the team to make more general predictions about what factors would determine whether or not patients would recover from a stay in ICU. By analyzing data from throughout a patient’s stay, the team made an important finding: “We discovered that variables and parameters of health that are typically thought to be important on admission day were not the parameters that were important on day three,” says Faisal.

Faisal’s team wanted to make sure that ICU doctors could actively benefit from their algorithm’s insights. To this end, the team created a web-based tool that allows doctors to predict how patients with certain physiological characteristics will progress during their stay in ICU. Users can ask simple questions – how will COVID-19 patients with high blood pressure be affected differently over their disease course? What interventions work best for these patients? – and receive an easy-to-digest outputted answer. “Think about it like a situation room in movies where you see everything in one picture. That's basically what we aimed to provide, so that very smart, but very busy and very overwhelmed people could gain a sense of what was going on,” says Faisal.

“We’ve seen things happening in weeks that I would have thought would happen in years, if we were lucky." ~ Professor Aldo Faisal

But the team’s analysis was done retrospectively, and, although it doesn’t seem like it at times, the COVID-19 pandemic will eventually end. Will the team’s findings be useful for other disease states? “Absolutely,” says Faisal. “You can apply this to COVID-19, you can apply it to any disease that people are treated for in intensive care, but you could also apply it to primary care.” The pandemic, Faisal reckons, could be a watershed moment for healthcare digitalization. “We’ve seen things happening in weeks that I would have thought would happen in years, if we were lucky, two years ago,” he says. He points out that a more data-friendly approach in hospitals has also been mirrored in patient practices – the use of apps to signal whether you had been exposed to a virus is now commonplace but would have been totally alien pre-pandemic.

One element that Faisal stresses was key to the success of the study was the NHS’s centralized healthcare model, which enabled the team to pull data from hospitals under different health boards and combine them with relative ease. “If you are in a private health care system, then each hospital would have been a different private provider, potentially competing with other private providers and maybe not even wanting to share the data, because it could give away something about their operational standing.” The quest for a pandemic-proof NHS will require not just digitization, but collaboration.