Detecting Cancer From a Droplet of Blood

Molly Campbell is a senior science writer at Technology Networks. She holds a first-class honors degree in neuroscience. In 2021 Molly was shortlisted for the Women in Journalism Georgina Henry Award.
Learn about our editorial policies
Credit: iStock.

In 2000, the Human Genome Project (HGP) announced it had completed a working draft of the human genome sequence – a genetic “blueprint” of a human being.

In the same year, a new project emerged, one that sought to look “beyond the genome”: The Human Protein Atlas, which aims to map all of the human proteins in cells, tissues and organs. A cell, tissue or organism’s proteome – the complete set of proteins it expresses at a given time – reflects its dynamic state more accurately than its DNA code. Genes could be turned “on” or “off”, proteins might undergo post-translational modification – processes that can determine, or perturb, a cell’s function.

“Proteins are the building blocks of all life on this planet. They are also the targets for almost all drugs and thus incredibly important commercially,” says Mathias Uhlén, professor of microbiology at the Royal Institute of Technology (KTH) and program director of the HPA. “The holistic understanding of how proteins can execute all the functions in human life is still surprisingly unknown and thus a huge challenge for biomedical research.”

Officially launched in 2003, the HPA integrates breakthrough technologies – including mass spectrometry (MS)-based proteomics, antibody-based imaging, transcriptomics and systems biology – to create an open access resource, which is used in over 150 countries. Uhlén adds: “The resource now consists of more than 5 million web pages and is updated annually with new data and features.” To date, the HPA has contributed to several thousands of publications across the life science fields and is recognized by ELIXIR as a “European core resource”.

The structure of the HPA

Over the last 20 years, the HPA has launched 10 different sections that each focus on varying aspects of human proteins:

Table 1: The 10 different sections of the Human Protein Atlas.

“The ‘flagship’ Tissue Atlas was launched in 2015 with more than 10 million microscope bioimages showing proteins on a single cell level across all major tissues and organs in the human body. The 2015 publication in Science now has ~10,000 citations and it is thus one of the most cited research publications in Europe during the last 10 years,” says Uhlén.

This month, a new version of the HPA launches (version 22), introducing two new sections that reflect the increasing utility of artificial intelligence (AI) and machine learning in proteomics research. 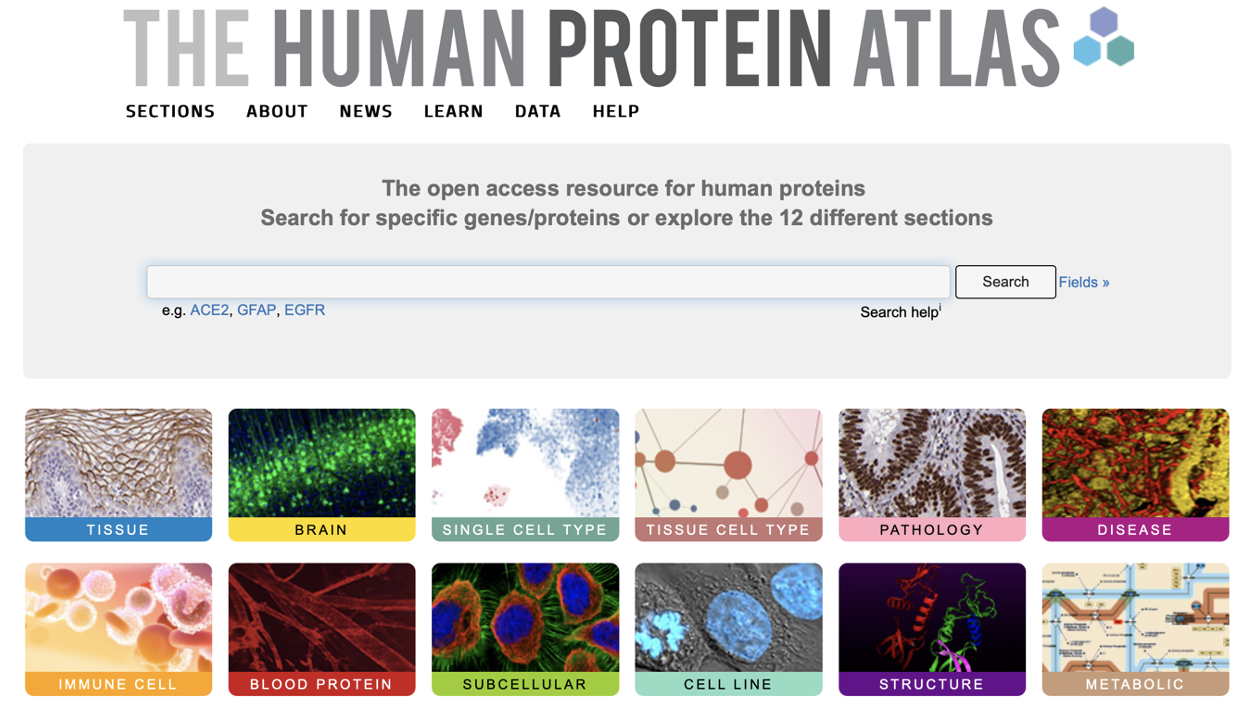 Detecting cancer-associated proteins from a droplet of blood

Version 22 of the HPA includes a new Human Disease Blood Atlas, which presents the results of a novel pan-cancer strategy to explore the proteome signature in blood samples obtained from cancer patients.

For a disease caused by changes to the DNA code, it makes sense that genomics-based approaches have dominated cancer research over recent years. “However, to understand the consequences of these changes it is often necessary to instead study the protein levels in the tumor,” says Uhlén. This can be achieved using tumor biopsies, but the procedure is invasive and can cause distress for the patient. A blood-based test to explore protein expression is a desirable alternative.

The researchers behind the Human Disease Blood Atlas analyzed 1,463 proteins from over 1,400 cancer patients. “We highlight proteins associated with each of the analyzed cancer types based on differential expression analysis as well as a machine-learning-based disease prediction strategy. By combining the results from all cancer types, a panel of proteins suitable for the identification of individual cancer types based on a drop of blood is presented,” Uhlén explains.

To achieve this panel, a combination of proximity extension assay (PEA) technology and targeted proteomics (MS) was used. MS has long been considered the “gold standard” technology for high-throughput proteomics analysis in research settings. However, assays have been used in the clinical space for many years; examples of their application include the detection of troponin, which can indicate that a heart attack has occurred. “However, these assays are based on analysis of a single protein, but assays to detect and quantify multiple protein targets – with a sensitivity needed for the minute concentrations of proteins in the blood – have been lacking,” says Uhlén. 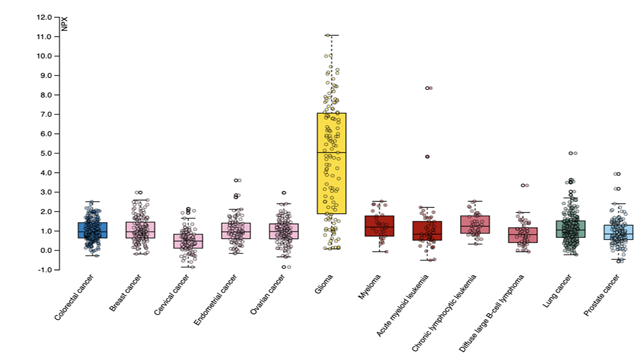 Towards next-generation cancer prediction medicine. The example shows the elevated levels of the protein GFAP in the blood of patients with glioma. Credit: The Human Protein Atlas.

The introduction of next-generation blood protein profiling, based on parallel analyses of thousands of proteins at once, is changing the game. “PEA has allowed thousands of blood proteins to be analyzed from a small drop of blood. These developments mean that we are entering a new era for personalized medicine based on detailed multiplex blood protein profiling,” Uhlén adds. Such platforms are poised to have a major impact on the cost of diagnosing and treating cancer, a disease with a substantial economic burden.

Uhlén emphasizes that, while the first version of the Human Disease Atlas is focusing on cancer, the HPA will explore other diseases using the same approach in coming years, such as cardiovascular, infectious, neurodegenerative and autoimmune conditions. “This will make it possible to compare the blood profiles across major diseases and thousands of individuals,” he says.

His words offer enthusiasm for a field that, despite significant advancements over the last decade, is yet to enter the clinical space on a widely adopted scale. “There are several obstacles to make these new findings translate into clinical practice. First, all potential tests based on new analytical platforms must be validated in independent cohorts and preferably with alternative analytical assays,” says Uhlén. This is no easy feat – it requires thousands of samples.

The second key obstacle, according to Uhlén, is the regulatory requirements that are costly and time-consuming. “It might be difficult to obtain clinical approval for panel tests measuring hundreds of proteins in parallel,” he says. “In addition, even very specific tests can give rise to ‘false positives’ causing unnecessary grief and psychological burden for the patient.” Therefore, clinically valuable tests must have secondary, independent tests available to identify “true positives” for diagnosis. These challenges aside, Uhlén is optimistic that with the rapid development of next-generation proteome profiling, “we will find ample applications in routine clinical practice in a few years.”

As for the future of the HPA, it will continue to host its open-access resource to facilitate protein research around the world, adding data to complement the body-wide spatial profiling in cells, tissues and organs with data focusing on structure, interactions, modifications and function.

Complete the form below to unlock access to this Audio Article: "Detecting Cancer From a Droplet of Blood "