Complete the form below to unlock access to this Audio Article: "How Elemental Imaging Can Transform Neuroscience Research"

In neuroscience research, imaging techniques are used ubiquitously in both in vivo and in vitro studies to produce critical insights that would be difficult to achieve without visualization capabilities. The applications of imaging are limitless; for example, detailed analysis of cellular circuits enables a deeper understanding of neural disease progression1, while non-invasive longitudinal monitoring of brain structures and volume facilitates efficacy studies for new treatments.2

Recently, sophisticated mapping techniques that enable studies of the distribution of different elements across a two-dimensional area of tissue have become available.3 Elemental mapping measurements are highly valuable in neuroscience research, as a wide range of data can be mined to reveal detailed information regarding changes in brain structure and physiology. Broad applications exist for elemental mapping in neuroscience research, including studies of neurodegeneration, traumatic brain injury, impaired regulation of metal binding and the distribution of metal-containing drugs.

These capabilities are made possible by powerful elemental imaging techniques, such as laser ablation (LA) in combination with inductively coupled plasma mass spectrometry (ICP-MS), which is favored largely for its ability to measure multiple elements simultaneously in a single analysis.4 Although ICP-MS is inherently challenged by the presence of interfering ions that potentially compromise accuracy, it offers a multitude of opportunities for the measurement of trace elements in biological samples. To build on the capabilities of ICP-MS, advanced techniques are being added, enabling the assessment of elemental spatial distribution in areas of interest – with high resolution.

Conventional ICP-MS as a tool in biological research

Conventional ICP-MS systems, commonly used for solution-based ICP-MS analyses, were developed in the early 1980s for measuring the concentrations of trace elements. With conventional ICP-MS, an ionization source, known as plasma, decomposes the sample into its constituent elements, which are transformed into ions and analyzed and subsequently quantified by MS.5 However, species that have the same mass-to-charge ratio as the analytes of interest create problems during MS analysis, as they cause the measured concentration of the target analyte to be overestimated. Interfering species can be classed into two main categories: isobaric and polyatomic.

Isobaric interferences refer to different elements whose isotopes share a common mass, while polyatomic interferences are caused by a combination of at least two atoms from different elements. Signals generated by the interfering species lead to an overestimation of analyte concentration,6 and can result from a number of sources including: argon from the plasma, ions generated by the sample matrix, leaked components of background air gases, and contamination from glassware.6,7

The extent to which interfering species cause background noise, or spectral interference, is highly dependent on the nature of the matrix. Therefore, careful consideration must be given to every analysis to determine how best to overcome the problem of interference. Several strategies have been employed with varying degrees of success, including6:

●     Estimating the extent of interference and applying a mathematical correction

While these approaches are useful in reducing interference, they are not perfect solutions; being selective about analytes of interest limits the research questions which can be addressed, and there is room for error in mathematical corrections. Modern, quadrupole-based ICP-MS instruments address the issue of interference to some extent, through the incorporation of a specialized cell that is built within the ICP-MS system. These specialized cells can be operated in collision or reaction mode; each of which use different approaches to removing polyatomic interferences.8 Simply put, collision cells are filled with a non-reactive gas (e.g. helium), into which all ions are fed. Larger, and potentially interfering, polyatomic ions will undergo more collisions than smaller ions, and will lose kinetic energy, leaving them unable to overcome an energy barrier at the exit. Similarly, cells in reaction mode utilize a gas which reacts more quickly with interfering ions than the target analytes, allowing ions to be filtered before they are detected. Each of the cell modes have limitations however, relating to loss of absolute sensitivity and limited flexibility. Initial sample preparation steps also present drawbacks: they are often labor- and cost-intensive, involve the use of hazardous chemicals, and introduce the risk of sample contamination.

How LA-ICP-MS is transforming elemental bioimaging

Other ongoing efforts in the field of ICP-MS relate to extending the scope of ICP-MS analysis beyond liquid solutions. One of those is laser ablation, which facilitates direct sampling of solid samples by using short pulses of high intensity light to convert the solid sample directly into an aerosol. Laser ablation ICP-MS (LA-ICP-MS) overcomes many limitations of conventional ICP-MS as it removes the need for any sample preparation. As a result, the associated drawbacks of sample preparation are removed and measurements can be obtained in less time.

The real benefit of LA-ICP-MS, however, lies in its ability to provide precise information on anatomical localization through ultra-trace elemental quantitation. A high level of lateral resolution is made possible by coupling laser ablation with different ICP-MS systems to suit the type of information required. Such capabilities are transformative, allowing the identification of processing artifacts that would not be detected with macroscopic imaging. Tissue wrinkles, folds and tears can create additional analytical challenges if unidentified but can be detected by carbon mapping with LA-ICP-MS (Figure 1). Phosphorus is another valuable element for neuroimaging; with its relative enrichment in gray matter, phosphorus mapping therefore enables gray-white matter differentiation (Figure 2).

Carbon and phosphorus mapping provide a greater context for data interpretation, which is particularly useful when investigating other elements, and can be achieved using single quadrupole LA-ICP-MS. Information on tissue uniformity and gray and white matter facilitates accurate localization and quantitation of other elements, such as copper, zinc, iron and gadolinium, and allows their true measurements to be distinguished from artifacts. Overall, the addition of laser ablation to ICP-MS provides many additional valuable benefits for neuroimaging, enabling: 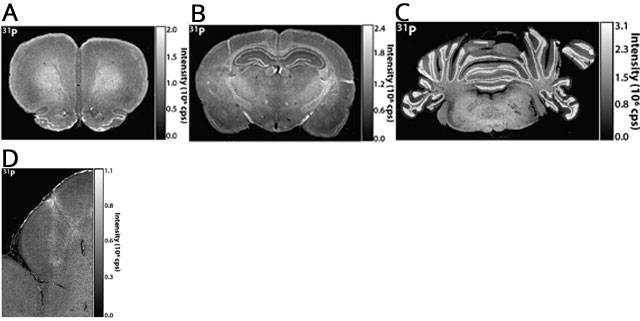 While single quadrupole LA-ICP-MS is a powerful bioimaging tool, many studies could benefit from improved resolution. Isobaric and polyatomic interferences remain a barrier to quantifying some elements of interest and represent a major limiting factor in elemental mapping. In order to provide enhanced interference removal, triple quadrupole MS can used in LA-ICP-MS, allowing greater selectivity to be applied when isolating and detecting the target analyte. With triple quadrupole MS, varying scan modes can be set before and after the precursor target ions undergo a chemical reaction with a reaction gas in the collision cell, enabling greater control over which ions are detected. As a result, greater sensitivity and selectivity can be obtained across a wider quantitation range, and lower detection and quantitation limits are made possible.

Using triple quadrupole MS, several approaches can be applied to overcome interference challenges. One of these is to prevent the formation of new interfering polyatomic ions in the first place; the application of the first quadrupole as a mass filter removes certain precursor ions so they cannot react with oxygen or other reactive gases used in the collision cell. Alternatively, it is possible to filter out unwanted isotopes by carefully selecting the scanning range of the third quadrupole. Additional filters do not necessarily compromise the sensitivity of elements being analyzed. Therefore, the addition of triple quadrupole MS can help to refine results, even if not all elements are burdened with interfering ions.

Neuroimaging techniques can be combined to corroborate findings, or to obtain complementary information that provides a greater understanding of the tissue sample. The integration of multiple analytical imaging methods is referred to as multi-sensor imaging,9 and allows a richer dataset to be obtained from a single sample. The goal of integrating techniques has been aptly described in the context of metallomics, where the aim is to understand the role of a specific metal, at a defined location in time within the context of a cellular process, and relate these to how dynamic functions cascade to higher levels at the tissue, organ and organism levels.10 Similar goals can be applied to elemental mapping, where changes can be correlated with underlying mechanisms during disease or health.

LA-ICP-MS is a prime candidate for multi-sensor imaging,9 and has been used to complement a wide range of techniques. For example, combining LA-ICP-MS with matrix-assisted laser desorption/ionization or electrospray ionization mass spectrometry (MALDI-/ESI-MS) provided a means to detect and identify metal-binding proteins in rat brain sections, with MALDI-/ESI-MS used to provide structure analysis of the detected proteins.10 Together with time-of-flight MS (TOF-MS), LA-ICP-MS allows simultaneous detection of almost the entire periodic table,11 providing an opportunity to capture the spatial distribution of the metallome in biological samples. In skin and brain tumor tissue, LA-ICP-MS enhanced the imaging of MRI contrasts, resulting in significantly reduced background and improved limits of detection for gadolinium and phosphorus.12 Given the increasingly fast imaging capacity of LA-ICP-MS, the technique is expected to have a high potential as a clinical diagnostic tool to visualize biomarkers.11

Towards a high-resolution future of imaging

The ability to accurately map elemental distribution in biological tissue is highly valuable in neuroscience research, where there is a high need for precise anatomical localization. Elemental mapping can also provide new opportunities in the exploration of essential physiological processes, both during health and disease, and in the development of diagnostic and therapeutic applications. In combination with laser ablation, ICP-MS is a powerful neuroimaging tool that enables ultra-trace elemental quantitation, allowing elemental mapping data to be interpreted within the context of gray-white matter distinction and tissue quality.

Enhancing interference removal enables a wider dynamic range and cleaner backgrounds to reveal additional structural information, and can be achieved with the use of triple quadrupole MS. Such advanced capabilities, integrated with other imaging techniques, is expected to transform neuroimaging in both research and clinical settings.