If the 20th century was about improving technology, the 21st century has focused on improving access to technology. Building connections and communication between people and technology has become a vital mission in many industries.  Gone are the days when these connections existed simply through our computers or phones. We now have smart watches, smart cars, smart, er, cookie ovens. Given that science often leads our society in technology and innovation, it’s no surprise that this “Internet of Things” (IoT) movement is coming to the lab. IoT technology has the potential to improve how labs function, how researchers work together, and, most importantly, improve data and results. But it’s not uncommon to see analogue routines and equipment populating otherwise cutting-edge labs (yes, I mean that 25-year old sample freezer that has to be wedged shut with a chair). What will IoT products look like in the lab, and will researchers embrace connection with conviction?

Powering Up the Pipette

Whilst sharing data from large hunks of equipment with beefy processors is pretty commonplace in the modern lab, some biotech companies are setting their sights on a piece of equipment not normally associated with digital technology: the humble pipette.

“When you look at the lab and you look at pipetting, it’s just something that people don’t give a lot of thought to, and they don’t realize how pervasive and ubiquitous it is” says Thermo Fisher Scientific’s Tommy Bui. We’re discussing his company’s latest foray into IoT tech, the My Pipette Creator App. Creator allows pre-programmed protocols to be downloaded to Thermo Fisher’s flagship E1-ClipTip digital pipettes. The protocols then pop up on the pipette’s built-in user interface and guide the user through the various pipetting steps. 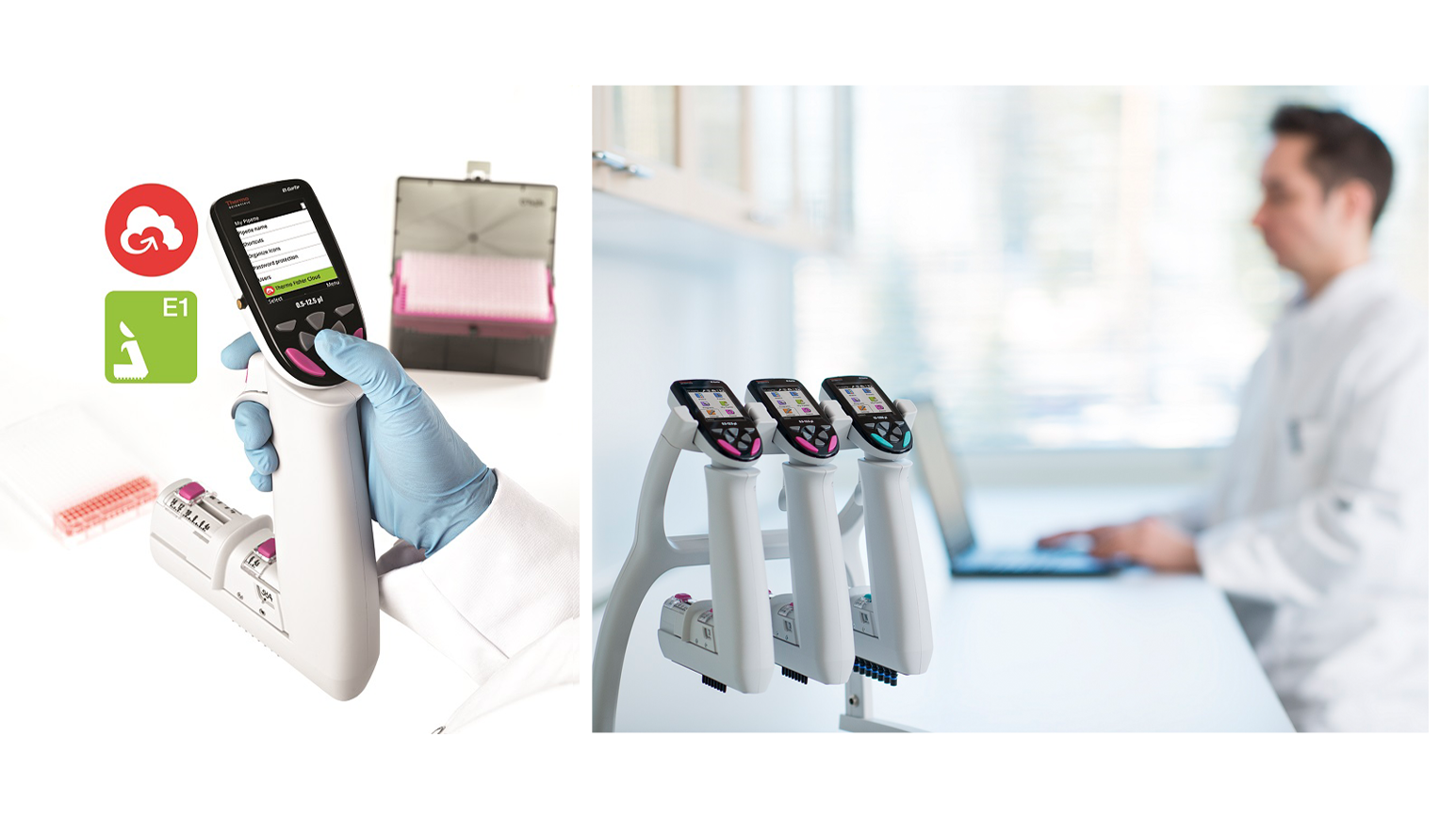 Why target the pipette? “70% of errors within an assay are pre-analytical,” says Bui. “So by, pre-analytical, I’m talking about experiment design and set up. This can involve volume and concentration calculations and transferring multiple liquids liquid into and out of a multitude of containers for example”.  With Creator, researchers can try to minimize these errors by using Thermo Fisher’s pre-programmed protocols for common assays like qPCR.  These protocols are part of an ever growing Protocol Library that users can access via the Creator app.  Importantly, for researchers that have their own individual quirks and preferences, the Thermo Fisher-made protocols can be tweaked to your heart’s content “All these pipetting programs are digital, but once you have them you're free to edit them all you want. You can take it and share it across your lab. Let's say you did an experiment and got great results, you can share it with your colleagues across the world or down the hallway,” says Bui. On a more practical level, Bui points out that the Creator app, which can be accessed through a laptop or desktop, will help users minimize the frustrations associated with electronic pipettes (like getting thumb strain from entering protocols onto a built-in screen). This, he says, should maximize the programmability of the E1-ClipTip.

Thermo Fisher isn't alone in its pipette innovations. Gilson has recently unveiled its IoT offerings - an electronic pipette and a tablet/app kit that can automate a pipetting protocol, track pipetting performance, and provide feedback at the end of the experiment.  (PIPETMAN® M Connected and TRACKMAN® Connected, respectively). Gilson's smart pipettes enable experiments to be analyzed in real-time, with data securely stored in a single centralized location that is accessible to all lab members and collaborators. Steve DeCabooter, Gilson’s Director of Product Information Platforms, says that PIPETMAN’s integration with the SciNote electronic lab notebook (ELN) helps it stand out to researchers; “Factors contributing to irreproducibility are inconsistent laboratory technique, inadvertent errors in manual processes and recordkeeping, and selective data reporting. Connected devices can reduce reproducibility problems by automating a manual process, recording and tracking data in real-time, and providing a centralized, accessible location for data storage.” 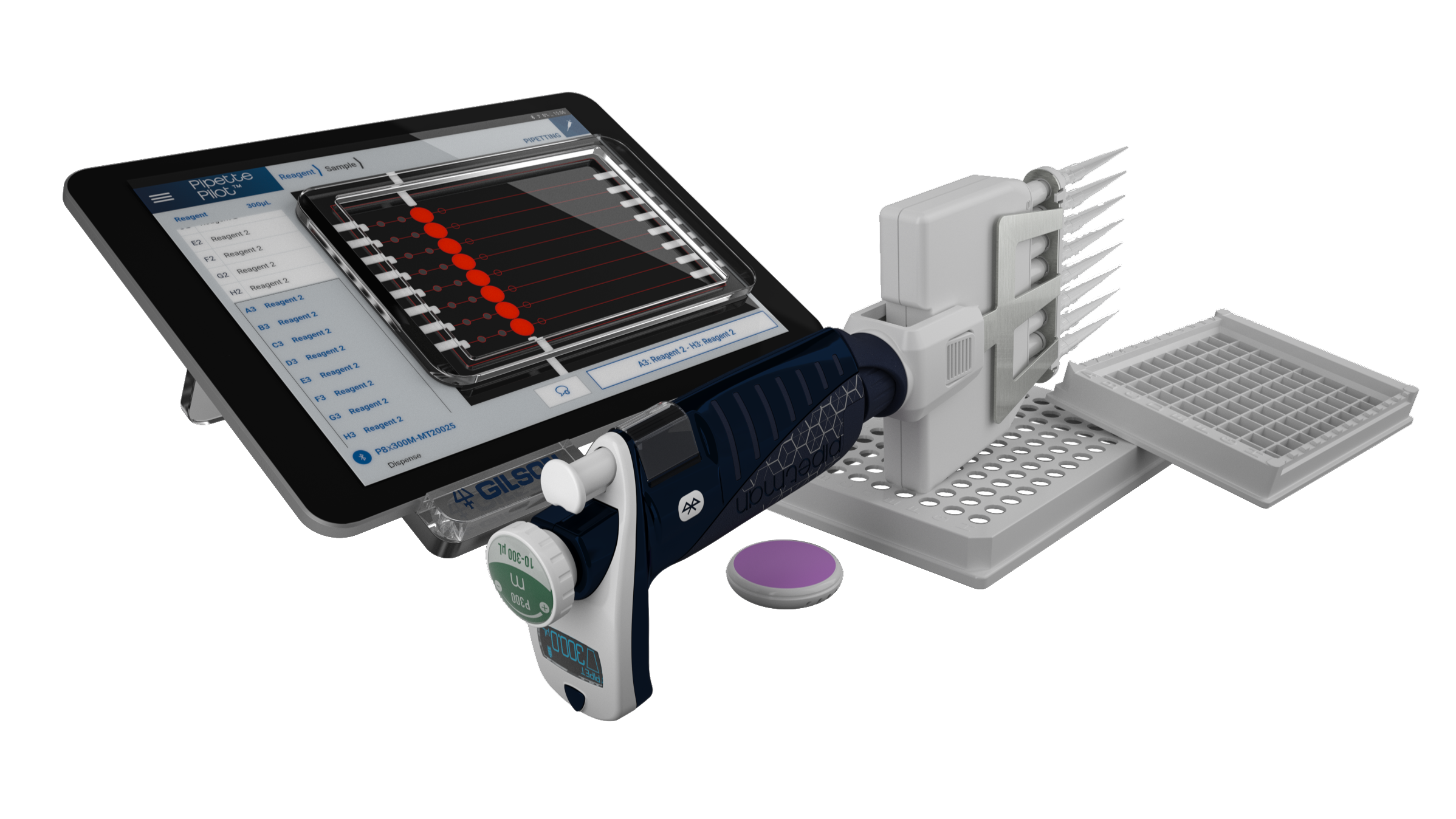 Gilson’s technology includes sensors to help researchers keep better track of their experiments, incorporating environmental data on temperature, humidity and pressure so that even the most detail-obsessed scientist will have the lowdown on their pipetting. According to DeCabooter, engineers at Gilson want to create tools that can save time for the researcher by collecting usage data. “Our belief is that progress in research can only be accelerated if researchers can focus their attention on doing actual science, not spending most of their day managing lab protocols and data. This is where we, as developers of the technology, can really step up to create solutions that make life easier for scientists.”

The high standard of technology available is unquestionable, but will researchers want to make use of it? Bui accepts that the uptake of digital pipette technology has been somewhat… sedate. “Adoption is slow. We have a lot of data to show that. The challenge here is really because we're changing everybody's mindset. I think people look at pipettes like a screwdriver. You need it, you go to the shed, you pull it out, you use it and you pop it back in. The only time you get mad is when it doesn't work the way you want it to work, right? So, we need to do a good job – not just us, I think it's anybody who's coming out with a connected, IoT-type instrument where you're changing people's mindsets or educating. We need to do a good job of showing the value. The information that we are getting back is from people who do use it and embrace it, they see the value right away. The efficiency gain, the ease of use, they see that right away”

But changing mindsets about pipetting might only be the first step for IoT providers. Ultimately, this technology could go far beyond the most basic of lab techniques and could spread throughout lab activities. Bui mentions that Thermo Fisher has a vision for what he calls a connected lab ecosystem, supported by a digital science platform. If the pipette is the screwdriver of the lab, Thermo Fisher wants to eventually bring IoT to the entire toolbox.

That widescreen goal is driven by two factors, Bui says, “The obvious one is efficiency. Everybody's being squeezed in terms of the cost it takes to bring a drug to market versus the revenue from those drugs. So, efficiency is everything. The second dimension, which goes hand in hand, is repeatability. Within a lab, if you do something which is good, you want to make sure you can do it again and again and again.”

Bui sees a connected ecosystem as key to attaining these two goals: “If you buy into a Thermo Fisher ecosystem, front end to back end, with a technique like qPCR, and all the devices are talking the same language, and data's being automatically passed down from one device to the next, the user is doing a lot less manual interaction, which obviously improves efficiency.” Gilson also envisage their products as part of a platform that facilitates information flow between devices like pipettes and an electronic notebook, “We are planning for the Gilson Connect platform to power a full suite of Gilson IoT devices, so TRACKMAN Connected is just the first connected product of many,” DeCabooter explains.

There’s another company that has, to great success, spent years promoting its own technology ecosystem to its users – although not a biotech company. Apple have long espoused the values of having a Mac alongside your iPad alongside your iPhone alongside – you get the idea – and their dedicated fans who have invested in such a setup arguably benefit from a smoother online experience than using products from multiple companies that aren’t entirely compatible with each other. But will IoT labs need to invest in one company’s products from top to bottom, and is that even remotely likely to happen? Bui has obviously put some thought into this: “Yes, that's the thing that the whole industry is thinking about. We know that there are associations and groups right now that include the biggest pharmas and the biggest suppliers, that are looking at that. Do you want to be open source? It's difficult. If you look at other industries that try to do this, I think it's tough to get a consortium in place to agree. I'm not saying you shouldn't do it because it's hard, but I think we need to come together as an industry to figure it out.”

Bui thinks that an “industry standard” that might enable different companies’ products to communicate might be an ideal solution: “Maybe there's a basic data structure that we all embrace. Kind of like WIFI, right? If we have this basic structure, each individual company can then take that structure and enhance it and keep it proprietary. We all agree on a basic structure, we can all communicate with each other in a basic way, which limits total functionality. But we all have the capability to build upon that basic protocol, for example, and then do our own thing. That might give us a competitive edge. I think that is the most realistic thing I can see happening. Obviously, that's just my opinion, but I think to get through adoption, we need an enabler like WIFI. WIFI is the true enabler that allows IoT to exist.”

Whether or not the biotech industry is able to embrace such a solution may ultimately determine the success of IoT in the lab. Hopefully some deal can be thrashed out, because the technology’s potential to improve research is undeniable. As DeCabooter sums up, “We can envision a future where all instruments in the research lab can communicate seamlessly with each other via internet-connectivity on a single platform, and all data will live in one central repository. To make possible such a ‘smart, connected laboratory’ and take this concept to a global scale, industry leaders and scientists need to work together and develop a common framework.”
Related Topics
Lab of the Future
PCR
LIMS and ELNs
Data Reporting, Compliance and Integrity
Meet the Author