The Wellcome Genome Campus, with its blend of contemporary architecture and exquisite Grade-II listed buildings, intertwines the past, present and the future as a hub for world-class scientific research. It's therefore indisputably the perfect host for the 2019 Lab of the Future Congress, where the mission is "to help drive the successful incorporation and integration of new technologies and thinking into the lab" in order to "redefine the lab".

With an impressive agenda featuring an array of panelists from the pharmaceutical industry, technology and software developers and academia, the congress looks set to instigate forward-thinking conversations on how innovation can drive the lab environment forward and reshape scientific research.

How much of the future is now, and how much is yet to come?

Kicking off the 2019 Lab of the Future congress, Bryn Roberts, Senior Vice President, Global Head of Operations, Research and Early Development, Roche, pays homage to the lab of the "past". Highlighting a picture in which the lab of Thomas Edison is recreated, he asks: "What's changed in the last century?" In Roberts' opinion, not all that much: "If Edison walked into one of our labs today, it would not be unfamiliar… the lab of the future has not evolved that much in the last century or so." 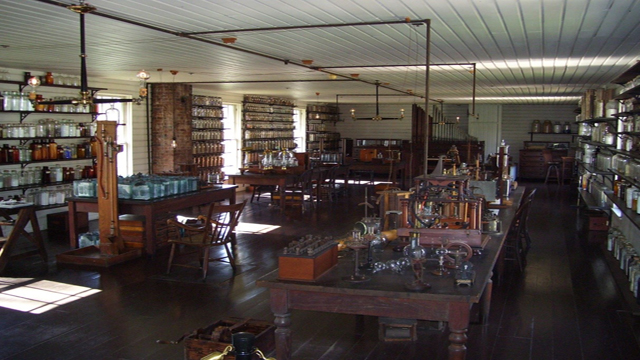 Considering the dramatic extent by which technology has advanced and improved since Edison's lab was in action, should the striking similarity between the lab of the past and the lab of the present be a concern? And what exactly do we mean by lab of the future? What innovations are required to get there? These are the key themes explored by this year's congress, summarized in this article.

Where is the lab?

To construct an ideal for the "lab of the future", it's important to first explore what the lab represents, both to scientists and also in the broader context to include those whose lives are impacted by scientific research. So, technically – everyone?

Roberts opens the conversation by emphasizing that, for Roche, the lab "Doesn't end at the walls of our building", as "The real-world setting is our lab," connoting an almost "omnipresent" quality to the lab and to science as a discipline. Fellow panelist Monika Lessl, Vice President, Head of Corporate Innovation and R&D, Bayer AG, echoes the idea that the lab is not simply confined to four walls: "The lab for me is a place where we experiment with new ideas to find solutions for big challenges. Keeping that in mind, the lab of the future [for me] is everywhere." She continues: "It's about breaking down the walls; the walls between the lab, the walls between disciplines and the walls in our mind. It's making the impossible possible."

Steve Martin, Head of Biopharma Discovery at Glaxosmithkline (GSK) adds, "I'm not sure the lab of the future is a place." If the lab of the future is "everywhere", how do you look to run experiments in the "real world"? Here, Roberts points to the utilization of digital biomarkers, clinical trials that utilize wearables or mobiles, permitting continuous and longitudinal study that is sensitive, precise and objective.

Furthermore, Roche are now employing social media to further understand disease, Roberts explains. "What is it in the real world setting that patients are struggling with?" He goes on to discuss how social media has thus far been used to add two new symptoms to the Parkinson's disease model by Roche. "You can get a lot from literature, but what you see from mining social media is lots of additional insights." What's interesting, is that throughout the keynote panel The changing R&D landscape: How should the Lab of the Future Respond?, there is little to no mention of specific technologies that look set to drive the lab environment forward. Rather, the spotlight is solely on the scientists. 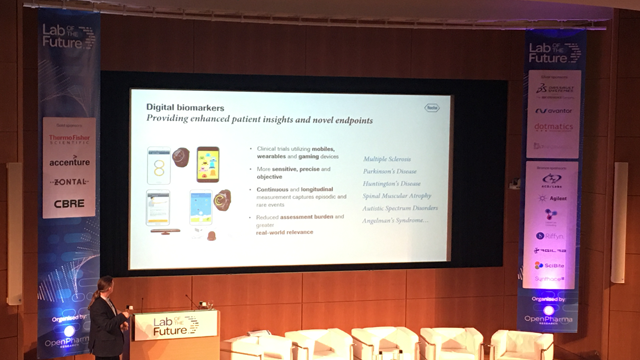 A call for multi-disciplinary scientists

As analytical technologies continue to be refined and improved, scientific disciplines are generating more data than ever. It's desirable, therefore, for the biologists and chemists of the future to possess sound data handling skills. Nonetheless, there are data sets produced in modern experiments that are so complex and so large in magnitude that they require analysis by an expert data scientist.

Thus, encouraging collaborative work is pertinent to the lab of the future, the panel suggests. Martin says, "Identifying individuals that are both data scientists and biologists and chemists is difficult. There is a language problem, and this impacts recruitment."

On the topic of data scientists in a separate talk, Pieter Peeters, Senior Director of Computational Biology, Janssen Research and Development, adds "I value interaction between data scientists and biologists. There are certain factors of how data has been generated that data scientists need to know about, and they know about it from biologists/ chemists." So how do we encourage a collaborative element to the lab of the future? Craig Hewitt is the Head of Lab Operations at AstraZeneca. In the keynote panel Building and using the lab of the future, he says "We want to try and drive collaboration through bringing disciplines together." He continues: "We [AstraZeneca] brought lots of expertise into one space in our lab in Sweden. This has helped us to achieve a smaller footprint and increased productivity. We want adaptable labs."

Astrazeneca are establishing collaborative research through the Lab4Life program, where the philosophy is to create flexible lab and office working environments through shared "spaces" and multifunctional neighborhoods.

But should this collaborative approach be implemented earlier in a scientist's career, perhaps during training? Peters comments that Janssen are "Actively discussing with universities in our ecosystem about future talent and the requirements for multi-disciplinary scientists." In the Building and using the lab of the future keynote panel, I ask the speakers: "How can the lab of the future be designed to promote inclusivity?". Tim O'Connell, Director of Science & Technology, HOK comments: "There is a cultural component to the lab of the future that needs to be addressed." He proceeds: "[When building the lab of the future] you want to talk to a lot of different individuals. I do think it's a case of more 'we', and less, 'me'." 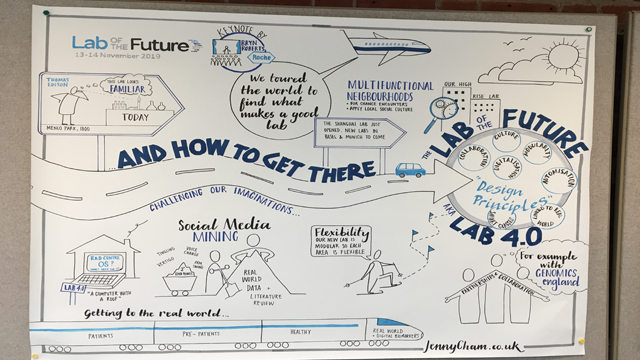 Unsurprisingly, buzz words such as "artificial intelligence", "robotics" and "automation" are seeded throughout panel discussions and presentations. What's pleasing to hear, however, is that despite the extraordinary advances we are witnessing in these spaces, a common vision seems to be shared by both vendors and researchers alike: automation cannot, and will not, replace scientists in the lab of the future. People are integral. The Lab of the Future

END_OF_DOCUMENT_TOKEN_TO_BE_REPLACED

I meet with Markus Gershater, Chief Scientific Officer of Synthace, a company whose mission is to bring the power of digital technology directly into biological research, for a conversation at the event. He tells me: "I'm quite pleased to hear conversations where people are speaking very specifically and agreeing together that scientists are going to remain exceptionally important in and amongst the overall ecosystem. Sure, there are going to be digital tools which help bring different components of scientific research together, but the scientist will not be replaced by any form of AI creation."

Paul Donohoe, CTO, Somark Innovations, adds, "We should be looking to utilize AI to augment the insights that scientists are trying to understand, by expanding the number of variables that are analyzed."

He continues, " Technology selection is a skill. I don’t know whether it's an art or a science. The choice is very hard for organizations. It's difficult to choose how to select technologies and how to implement them easily. But the technology is only as good as the people that use it."

Synergies across the 4Ds

Throughout the panel talks, we hear the "4Ds" being frequently mentioned, referring to:

Bruce Dembofsky, Director of Scientific Services, Avantor says that "Synergies across the 4Ds is essential to creating a brighter future" and “unlocking an 'innovation ecosystem'”. But how do we create such synergy? Avantor believe there are six key factors: creativity, services, coordination, cloud, technologies and productivity; once again emphasizing the value of the people and digitization in the lab of the future.

As the congress draws to a close, it seems that there is great appreciation for the thought-provoking and enlightening discussions that the meeting has prompted. It's also inspiring to see that, despite the attendees stemming from a wide variety of scientific disciplines, there is indisputably a shared vision for the lab of the future, and how we get there.

When asked to close the Building and using the lab of the future panel, Hewitt makes a statement that I believe eloquently summarizes the key message of the 2019 Lab of the Future Congress: "Don't forget the people."
Advertisement

At Technology Networks we understand the importance of time. That's why we've launched Teach Me in 10 a video series that challenges scientists to present and summarize their research area, a scientific concept, or technology in ten minutes or less.

END_OF_DOCUMENT_TOKEN_TO_BE_REPLACED

Explore the Complexity of The Nervous System

END_OF_DOCUMENT_TOKEN_TO_BE_REPLACED

Why Are Queen Bees Failing To Reproduce?