When it comes to laboratory informatics, there’s no place like PITTCON. North America’s preeminent analytical chemistry trade show, held earlier this month in Chicago, may have more-than-halved in attendance compared to its heyday in years-past. But it’s still the place that all the major (and many minor) vendors show off their wares. Customers learn how to choose, implement, and validate a system, and users get lessons from experts and tips from each other about how providers are solving the issues plaguing them -- even if they didn’t realize they were plagued.

Lab informatics can be many things to many people. It runs the gamut from tracking and controlling instrumentation, to standardizing and automating processes, to logging, storing, and being able to search the data produced, even to managing samples and inventory, and collaborating in real-time with colleagues a half a world away.

Holistic platforms like laboratory information management systems (LIMS) and more dedicated solutions like chromatography data systems (CDS) are just two of the alphabet soup of informatics acronyms featured at PITTCON. In addition to showcasing their wares, vendors announced updates, added features, improved functionalities, and in at least one case a significant acquisition. A host of oral sessions – many of them led by members of the CSols consulting group -- were dedicated to all manner of things informatic, from how to pay and what the true costs are, to where to deploy, to case studies from end users about improving productivity and maintaining regulatory compliance.

Manage all your impurity information in a single, live interface 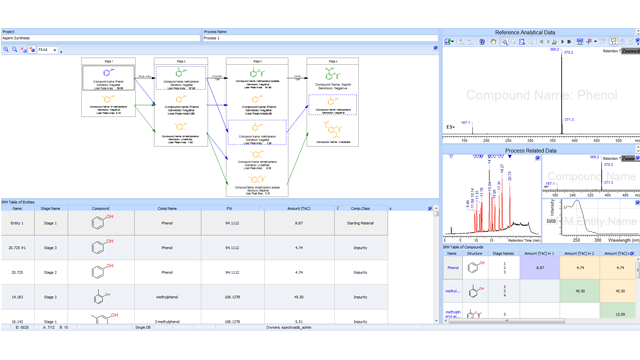 LUMINATATM is an informatics system that enables organizations to manage impurity knowledge and establish effective impurity control strategies. Process schemes; the associated formation and fate of impurities; and related chromatographic and spectral data are aggregated in a single multi-technique, vendor agnostic environment for unprecedented visualization, decision-support, reporting and collaboration.

Not surprisingly, talk of “the cloud” seemed to be nearly ubiquitous – whether discussing software as a service (SaaS), mobile access, security concerns, or infrastructure requirements. Christopher Hahn, a Validation Consultant for CSols, highlighted the projection “that in the next three years something like 91% of companies will be moving to the cloud.” Whether that’s everything they do, or just a tip of their computing iceberg, it still points out the importance of Internet-based, shared resource data analysis and storage platforms.

For example, Waters Corporation, whose Empower CDS software boasts over 425,000 users, announced the launch of the enterprise-level Empower Cloud, combining Empower with Amazon Web Services. This, “provides Waters’ global customers with the speed and agility to bring all of their locations online,” according to their press release. “Infrastructure complexity is also eliminated, as no third-party application of server virtualization technologies are required.”

“The fact that it’s in the cloud just means that you don’t need servers in your company to run the chromatography software,” points out Howard Rosenberg, Principle Industry Consultant for CSols, who spoke to the conference about the true costs of deploying informatics platforms. He cites two principle reasons that companies would want to use cloud-based software. First, to save on hardware, IT staffing, and the like. The second is the flexibility that deploying on the cloud affords.

It’s one thing to have dedicated servers – whether on-site or off-site -- to host an informatics platform that effectively belongs to the organization using it. Another option is software as a service (SaaS), in which the software is rented – think Google Docs. “For smaller labs that’s become a godsend,” remarks Ken Ochi, Manager, Global Marketing and Customer Relations at Accelerated Technology Laboratories (ATL). SaaS allows for the rapid deployment of new software, with the ability to scale the system as needs change, explained Stacey Brewer, ATL Senior Product Specialist, in an oral presentation, emphasizing the need for a detailed service level agreement (SLA) that spells out terms such as guaranteed up-time, access to technical support, and security arrangements.

Another significant announcement at PITTCON was the acquisition of Core Informatics by Thermo Fisher, already a top-tier enterprise-level LIMS provider. “Core is a SaaS-based vendor, and it’s really the only big player – the only vendor that can support larger implementations,” explains Katherine Temple, Laboratory Informatics Consultant at CSols. “It opens Thermo up to the whole continuum of lab sizes from small startups through large pharma.”

As for now it will be “business as usual” for both parties, but ultimately the company hopes to leverage some of Core’s expertise around the cloud and cloud technologies, says Katie Evans, Senior Product Manager in Thermo Fisher Scientific’s Informatics and Chromatography Software group. “The other basic strength of the Core group is their very strong and growing footprint in the genomics and R&D space.”

Once upon a time – say, three years ago – a laboratory execution system (LES) was distinct from a LIMS which in turn was distinct from an electronic laboratory notebook (ELN), recalls Temple. You used an LES to perform the same steps time after time in a very routine fashion. At the other end of the spectrum, an ELN was essentially a database that captured information the same way it would have been captured in a paper notebook. “That’s for more R&D applications, early discovery, method development, things like that.” And in the middle sat the LIMS, which could handle a little bit of both. “LIMS is probably the overwhelming product in most non-hospital labs. You see LES a lot in hospital labs.”

But the lines have begun to blur, and the products are competing with one another more and more, she says: LabWare’s LIMS has an LES module, while LabVantage has “pretty close to a true ELN” that’s part of its LIMS. Meanwhile Thermo Fisher’s SampleManager has recently added a fully-integrated scientific data management system (SDMS) and LES (also termed “procedural ELN”), notes Evans. “That’s quite game-changing to have all this functionality on one platform.”

An SDMS captures raw data from non-chromatography, stand-alone instruments such as spectrophotometers and particle sizers. “All your data is getting backed up, it’s easily query-able, easily archived, and it’s there in case of investigations or regulatory audits, etc.,” points out Hahn, whose session was on fine-tuning an SDMS. Such systems, like a CDS, can be interfaced with a LIMS.

Advanced Chemistry Development (ACD/Labs) introduced its new Luminata tool at PITTCON, slated to debut this summer. The software tool interacts with a variety of analytical instrumentation – reading their native, proprietary formats -- to track and manage impurity data across the stages of a product’s manufacture. “We’ve built a complex data assembly and presentation tool that allows for this data to be constructed and decisions to be made more effectively,” explains Vice President of Business Development Andrew Anderson.

Along the Audit Trail

Each market has its own regulatory constraints and pressures. For example, “the FDA put out the Food Safety Act, which has made food companies start to really act more responsibly as far as validated solutions – they have to act like pharma companies, almost,” notes Bob Voelkner, Director North American Sales for LabVantage. They need to demonstrate compliance with all the regulations, and the best way to do this is with an electronic audit trail. “You can have a compliant process on paper, but it’s very costly to do that because it takes more people, there’s more error, so there has to be more oversight. Companies are looking at ways of eliminating non-value-added activities like paperwork from their workflows and processes in the lab.”

Pharma companies are under even more scrutiny, especially since the FDA’s draft guidance last year on data integrity. For example, data entered into a LIMS may be stored in “temporary memory” before it’s written to the database. If a number is changed – say you mistakenly entered a pH value of 2.6 and then corrected that to 2.7 – the FDA wants that change (along with an explanation) to be permanently documented. Companies such as LabVantage and Autoscribe Informatics have amended their software proactively in anticipation of the adoption of this guidance.

PITTCON attendees look to laboratory informatics for a few things, among them being: to fix problems in their lab; reduce their reliance on paper; electronically gather, store, and safeguard data, with the ability to easily find and review it; run equipment in a standardized way; become or remain compliant with regulations; automate and relieve the waste in manual processes. Whether holistic or point solution, cloud-based, browser- or mobile-enabled, owned, licensed, or rented, LIMS, ELN or LES, CDS or SDMS, or some permutation or combination of these, a variety of means exist – from a variety of vendors – to achieve the goal.

END_OF_DOCUMENT_TOKEN_TO_BE_REPLACED

Half of Arctic Warming Due to Banned Ozone-destroying Substances