We Can Sequence the World…but What Then?

We Can Sequence the World…but What Then?

Complete the form below and we will email you a PDF version of "We Can Sequence the World…but What Then?"

﻿With roughly 8.7 million species on Earth , you might assume that sequencing the DNA of all of them would take decades. According to Professor Knut Reinert, PhD, of the Free University of Berlin, that massive undertaking could be completed in just 10 days using roughly 10,000 of today’s fastest DNA sequencers.  That’s because sequencing has become about 4,000 times faster in the last 10 to 15 years.

In that same time frame, sequencing has become about 10 million times cheaper.   A human genome can now be sequenced for as little as $1,000 in high-volume laboratories. According to the McKinsey Global Institute, that price will drop by another factor of 10 within the next decade.  Collecting genomic data is becoming fast, cheap, and relatively easy.

Handling the Torrent of Genomic Data

The bigger challenge will be analyzing all the data that is generated. One study estimates that 100 million to 2 billion individual genomes will be sequenced by 2025, generating 2 to 40 exabytes of data.  Buried in all that data will be insights that could fundamentally transform our understanding of life, from cellular biology and disease mechanisms to drug discovery and agriculture. Uncovering those insights will require massive amounts of analysis.

Professor Reinert and his team are working with Intel to provide researchers and laboratories with new tools to help them tackle this immense analytic challenge.  Because of their groundbreaking work in bioinformatics, the Free University of Berlin was selected as a new Intel Parallel Computing Center (IPCC) in 2015, with Professor Reinert at the helm.  Since then, his team has been working to improve performance for important genomic algorithms by optimizing the codes to take better advantage of modern multicore, multi-threaded processors.

Once Professor Reinert’s team optimizes an algorithm, they package it in SeqAn*, an open source library of genomics-focused applications. The algorithms in SeqAn are not only optimized for performance, but also for ease-of-use, maintainability and portability in standards-based hardware environments. They can be combined to create complex, flexible analytic pipelines and they can be used freely by both academic and commercial organizations.

The purpose of SeqAn is to accelerate genomics research and increase use by simplifying pipeline development, driving down costs, and delivering order-of-magnitude and higher gains in performance.  Good progress has been made toward these goals and SeqAn is growing in popularity. According to Professor Reinert, it has already been cited in more than 300 research studies.

Complex software algorithms have been developed over many years to analyze genomic data. These algorithms offer amazing functionality, but have been written primarily to enable accurate science. Most of the developers were experts in genetics and bioinformatics, but not in the complex hardware and software issues that are pivotal to maximizing computing efficiency and application throughput. As a result, performance and scalability issues often arise in high-volume and time-critical environments. Ongoing increases in the size and complexity of genomic data adds to these challenges.

One reason it has taken so long for algorithm optimization to occur is that it requires expertise across multiple disciplines to fully understand the science, math, software, and hardware. Every base pair matters when looking for genetic markers, so software developers must understand how their optimization efforts impact not only the speed of analysis, but also the accuracy and reliability of the results. In some cases, Professor Reinert and his team have had to create new algorithmic approaches so that the code could be scaled efficiently across large numbers of threads and cores.

However, most software code is designed to run as a single thread, which means that the application can only take advantage of a single processor core. To improve parallel throughput, software developers can often break the sequential stream of code into multiple threads that can be run concurrently across multiple processor cores.  For software that has sufficient intrinsic parallelism, this process can be used to generate code that can take advantage of all available cores in modern processors, servers, and clusters.

Vectorization and multi-threading are well suited to the computational demands of genome analysis, which relies on a series of relatively simple calculations that are performed iteratively across large data sets. Increasing performance-per-core while also utilizing more cores has a multiplicative impact and can deliver dramatic overall performance gains. Performance tests to date show: 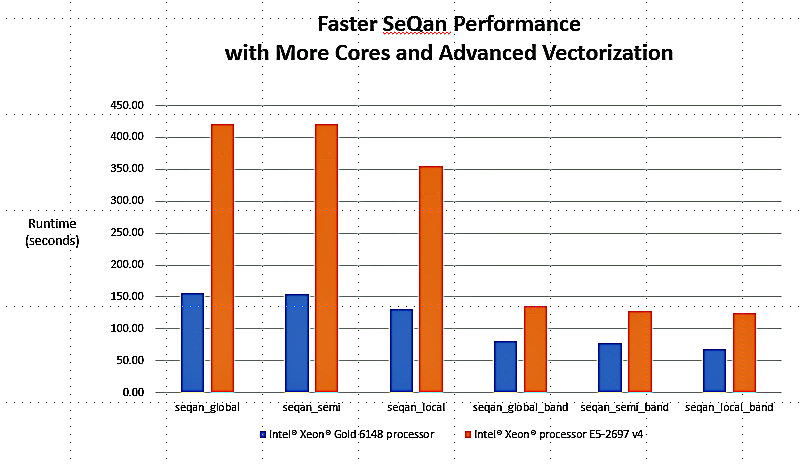 ﻿Figure 1. The optimized SeqAn code takes full advantage of the advanced vector support in the latest Intel® Xeon® Gold 6148 processor, which helps to enable performance gains as high as 1.6X to 2.7X across a range of SeqAn workloads versus the previous-generation Intel® Xeon® processor E5-2697 v4. 8 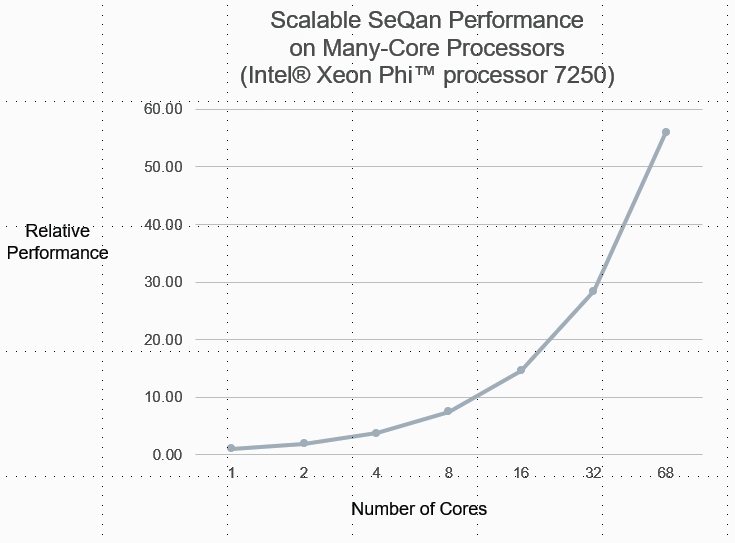 Performance and scalability improvements of this magnitude are transformative, potentially reducing the time required for complex genome analyses from days to just minutes. Professor Reinert’s software optimization efforts focus on extracting as much parallelism as possible from the code, so the performance benefits will continue to increase as core densities increase in future processor generations

Unlocking the Secrets of Life

Optimizing algorithms for high performance is a critical step toward handling the coming torrent of genomic data. The stakes are high. The McKinsey Global Institute estimates that next-generation genomics has the potential to impact the global economy by as much as $1.6 trillion per year by 2025,  and the impact will ultimately go far beyond economics.

We are standing at a tipping point in our ability to understand the genetic code and its detailed impact on plants, animals, humans, populations, and even whole ecosystems. Today’s advances in DNA sequencing are happening alongside complementary advances in life sciences research tools, such as molecular imaging and molecular dynamics (computer simulations of atomic and molecular interactions).

In combination with these technologies, fast genome analysis provides the foundation for understanding, in unprecedented detail, the role that individual genes and combinations of genes play in cellular processes. These advances will deepen our understanding of life in its many forms, improve our ability to heal and shape ecosystems, and pave the way for precision medicine that can adapt to the unique physiology of each individual.

Information on performance and benchmarks can be found at http://www.intel.com/performance/datacenter.