Researchers from Duke University, Massachusetts General Hospital and the International Centre for Diarrheal Disease Research in Dhaka, Bangladesh have used machine learning algorithms to spot patterns within communities of bacteria living in the human gut that no human would ever be able to pick out. These patterns could indicate who among the approximately one billion people around the globe at risk of cholera infection will get sick with the diarrheal disease.

“These are patterns that even the most sophisticated scientist couldn’t detect by eye," said Lawrence A. David, Ph.D., a senior author of the study and assistant professor of molecular genetics and microbiology at Duke School of Medicine. “While some people are warning about artificial intelligence leading to killer robots, we are showing the positive impact of AI in its potential to overcome disease.”

The research, published this week in the Journal of Infectious Diseases, suggests that a focus on gut microbes may be important for developing improved vaccines and preventive approaches for cholera and other infectious diseases.

“Our study found that this ‘predictive microbiota’ is as good at predicting who gets ill with cholera as the clinical risk factors that we’ve known about for decades,” said Regina C. LaRocque, M.D., MPH, of the Massachusetts General Hospital Division of Infectious Diseases, a senior author of the study and assistant professor of medicine at Harvard Medical School. “We’ve essentially identified a whole new component of cholera risk that we did not know about before.” 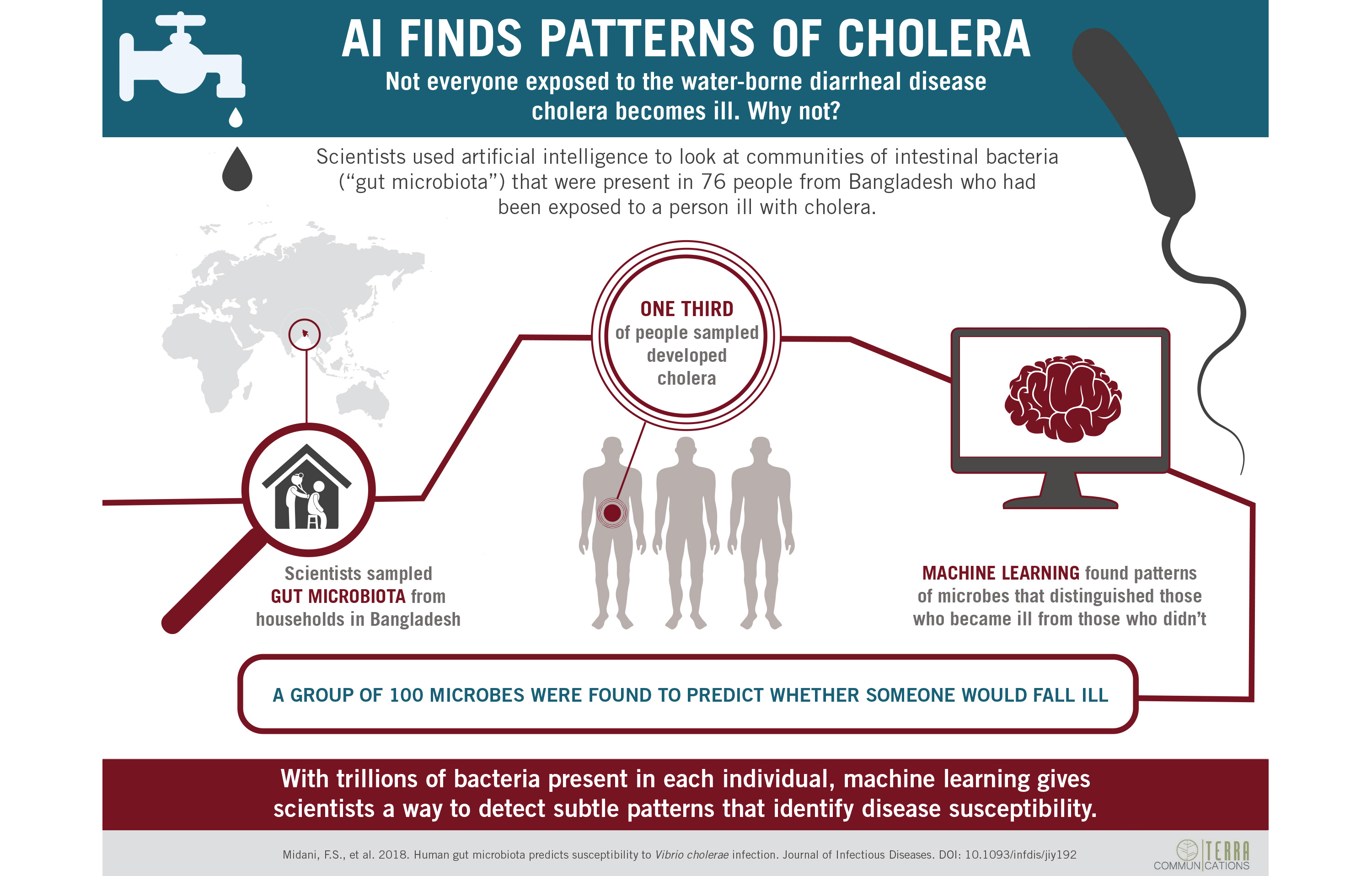 Cholera can spread rapidly in areas with unsafe drinking water and inadequate sanitation, causing millions of cases of acute watery diarrhea every year. Despite its global impact, scientists still do not completely understand why some people who come into contact with the cholera bacterium become sick while others do not. Some studies have pinpointed a few risk factors, such as age, blood type and previous infections, but these only partially explain the differences in clinical outcomes after exposure to the pathogen.

In this study, David and LaRocque teamed up with Firdausi Qadri, Ph.D., a leader in cholera vaccine research in Bangladesh, to see whether the gut’s trillions of resident bacteria -- collectively known as the gut microbiota -- might also play a role in cholera risk.

The researchers collected rectal swab samples from residents of Dhaka who lived in the same household with a patient hospitalized with cholera, and thus were at imminent risk of developing the disease. Of 76 household contacts studied, about a third went on to develop cholera during the follow-up period and about two-thirds remained uninfected.

The researchers profiled the microbiota from the household contacts’ rectal swab samples using sequencing technology and then loaded all the data into a computer for analysis. They  trained the machine to scan the results from 4000 different bacterial taxa in each of the samples, looking for patterns that distinguished those who got sick from those who didn’t. Eventually, the machine hit on a set of 100 microbes associated with susceptibility to cholera.

“Normally, you have to eyeball the data, studying one bacterial species at a time in hopes of finding a signal that is associated with infection,” said Firas S. Midani, a lead author of the study and a graduate student in David’s lab. “Machines have the ability to look at a hundred species at a time, and amalgamate them into one signal.”

The team showed that the model generated by artificial intelligence could predict illness even better than models previously built by infectious disease experts. The model also suggested hypotheses that might explain why the patterns identified by the computer are associated with disease. For example, when the researchers picked a bacterial species identified by their model and studied it in the laboratory, they found that the bacteria promoted the growth of cholera in test tubes. Their findings indicate that the composition of the gut microbiota could create an environment that is more or less hospitable to pathogens.

“Scientists have long had a hunch that gut bacteria might affect a person’s susceptibility to diarrheal diseases, but our study is among the first to show this in a real-world setting,” LaRocque said.