Ruairi is a senior science writer at Technology Networks. He holds a Master's degree in clinical neurosciences from the University of Cambridge and has written for Technology Networks since 2018.
Learn about our editorial policies
Professor Jae Eun Jang (left) in the Department of Information and Communication Engineering and Combined M.S.-Ph.D. program student Minkyung Shim (right). Credit: DGIST
Read time:

Prosthetic technology has taken huge strides in the last decade, but accurately simulating human-like sensation is a difficult task. New “electronic skin” technology developed at the Daegu Gyeongbuk Institute of Science and Technology (DGIST) could help replicate advanced “pain” sensations in prosthetics, and enable robots to understand tactile feedback, like the feeling of being pricked, or that of heat on skin.

Trying to recreate the human senses has been a driver of technologies throughout the 20th century, like TV or audio playback. Mimicry of tactile sensing has been a focus of several different research groups in the last few years, but advances have mainly improved the feeling of pressure and strength in prosthetics. Human sensation, however, can detect much more subtle cues. The DGIST researchers, led by Department of Information and Communication Engineering Professor Jae Eun Jang, needed to bring together expertise from several different fields to begin the arduous task of replicating these more complex sensations in their electronic skin, working with colleagues in DGIST’s Robotics and Brain Sciences departments.

Jang explained his findings in a DGIST press release “We have developed a core base technology that can effectively detect pain, which is necessary for developing future-type tactile sensor. As an achievement of convergence research by experts in nano engineering, electronic engineering, robotics engineering, and brain sciences, it will be widely applied on electronic skin that feels various senses as well as new human-machine interactions.”

The DGIST team effort has created a more efficient sensor technology, able to simultaneously detect pressure and heat. They also developed a signal processing system that adjusted pain responses depending on pressure, area, and temperature. 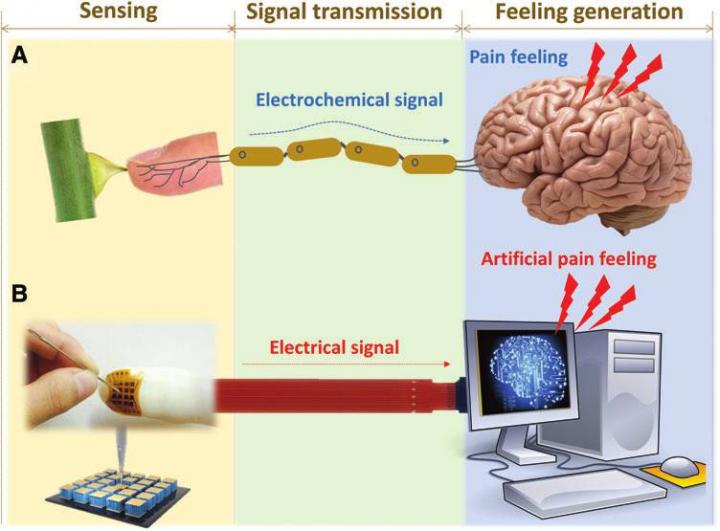 This is a mimetic diagram of artificial pain generation based on signal processing through a sense of touch. Credit: DGIST

Living in a material world

The electronic skin also required advances in materials science – the technology is based on a zinc oxide nanowire. This nanowire has two unique physical abilities that make it useful for replicating human sensation:

Jang believes the technology could have ramifications for advanced robotics: “If robots can also feel pain, our research will expand further into technology to control robots' aggressive tendency, which is one of the risk factors of AI development." Whilst pain-sensing robots remain a futuristic concept, Jang’s work shows that real-world robotics progress is catching up to sci-fi fast.