Is Allergy the Price We Pay for Our Immunity to Parasites?

Complete the form below and we will email you a PDF version of "Is Allergy the Price We Pay for Our Immunity to Parasites?"

Molecular similarities in food and environmental proteins that cause allergy (such as pollen), and multicellular parasites (such as parasitic worms), have been identified systematically for the first time.

The study was led by Dr Nicholas Furnham from the London School of Hygiene & Tropical Medicine, with colleagues from the European Bioinformatics Institute (EMBL-EBI), the University of Cambridge, the University of Edinburgh and the Ugandan Ministry of Health.

The findings support the hypothesis that allergic reactions are a flawed antibody response towards harmless environmental allergens.

It is thought that part of our immune system has evolved to combat and provide immunity against infection by parasitic worms. However, in the absence of parasitic infection, this same arm of the immune system can become hyper-responsive and mistakenly target allergenic proteins in food or the environment. This results in an unregulated allergic response, which can sometimes be lethal. 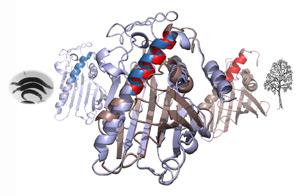 The researchers used computational techniques to predict which proteins in parasitic worms would cause an immune response similar to an allergic reaction in humans. Their experimental studies supported these predictions and, for the first time, they identified a protein in a parasitic worm that is similar to a protein that was previously thought to be encoded only in the genomes of plants. This protein is one of the most common proteins in pollen that causes allergy in humans.

Dr Furnham said “This study provides tools that will make it easier for scientists to predict proteins in food and the environment that are likely to cause allergy, and to design protein molecules for treating allergy.

“Our findings address an outstanding question: what makes an allergen an allergen? We’ve shown that the off-target effects of the immune system in allergy are due to the significant molecular similarities we have identified between environmental allergens and parasitic worm proteins. The findings demonstrate that allergy is the price we pay for having immunity to parasites.”

The study was funded by the Wellcome Trust, UK.