Researchers at the University of Birmingham are set to benefit from the largest IBM® POWER9™ Artificial Intelligence (AI) cluster in the UK. Working with OCF, the high-performance compute, storage and data analytics integrator, the University will integrate a total of 11 IBM POWER9-based IBM Power Systems servers into its existing high-performance computing (HPC) infrastructure, the Birmingham Environment for Academic Research (BEAR).

“It’s very important to us as a research-led institution that we are at the forefront of data research which means we are always looking at ways to make AI quicker and more accessible for our researchers,” said Simon Thompson, Research Computing Infrastructure Architect at the University of Birmingham. “With the sheer amount of data, the common questions from researchers are how can we analyse it fast enough and how can we make the process even quicker? With our early deployment of the two IBM POWER9 servers we have seen what is possible. By scaling up, we can keep-pace with the escalating demand and offer the computational capacity and capability to attract leading researchers to the University.”

This significant enhancement to BEAR will mean an even more powerful and versatile computing environment to serve researchers. For example, fellows from The Alan Turing Institute looking at early diagnosis of and new therapies for heart disease and cancer, will use AI to run faster diagnostics in the future. In contrast, researchers in the physical sciences are similarly using machine learning and data science approaches to quantify the 4D (3D plus time) microstructures of advanced materials collected at national large synchrotron facilities such as the Diamond Light Source. This research expects to use the large model support provided by IBM PowerAI software to analyse TBs of data being generated daily; currently an almost impossible task. 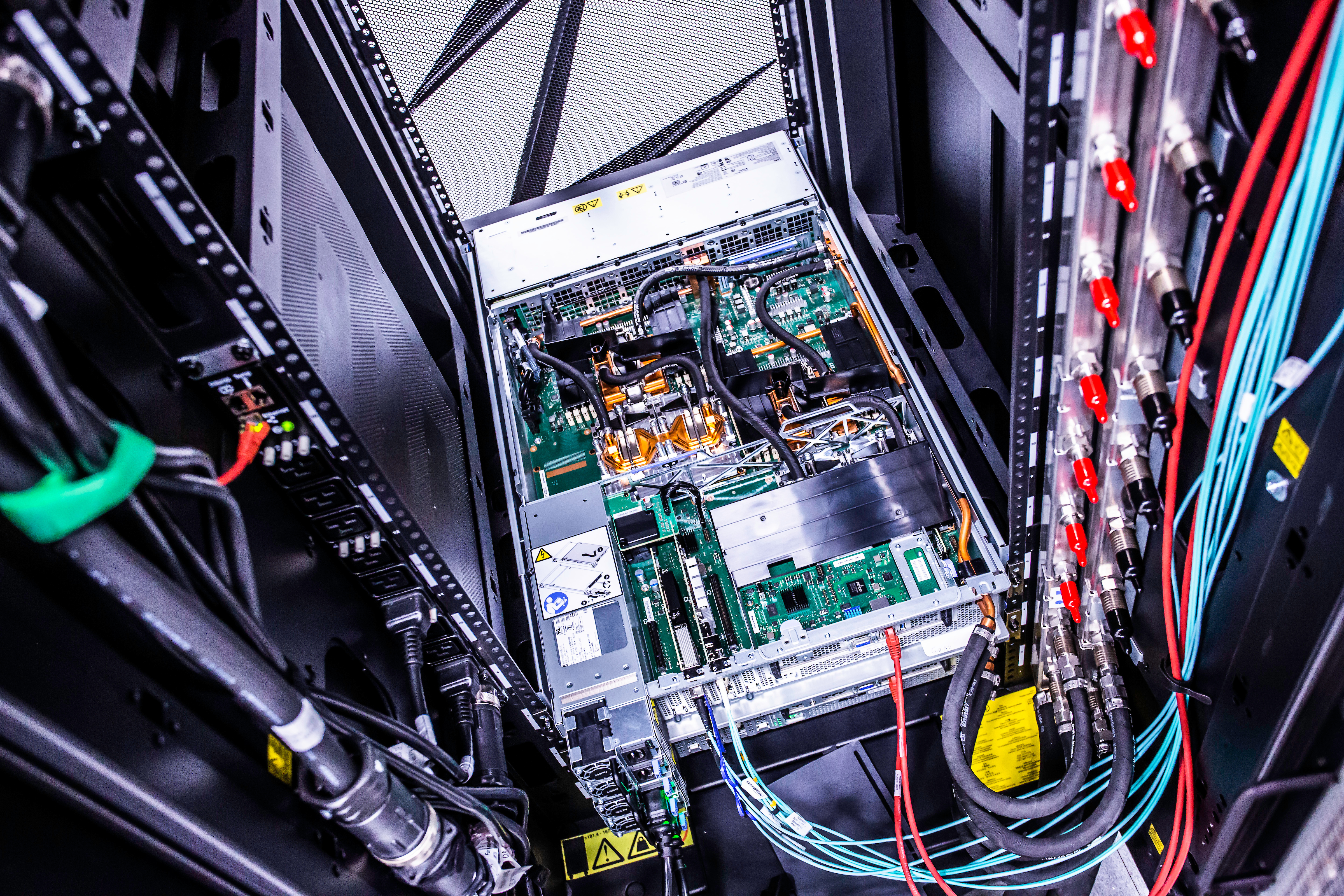 Birmingham will integrate 11 servers into its HPC environment, named the Birmingham Environment for Academic Research (BEAR). Credit: OCF/University of Birmingham

"We are thrilled that the University of Birmingham has decided to invest in building the UK's largest POWER9 AI cluster”, said Simon Robertson, Director, IBM Servers, UK & Ireland. “We are proud to see the practical application of IBM technology used by researchers across the University and beyond."

“We’re delighted to work with the University on this initiative,” said Julian Fielden, Managing Director of OCF. “AI workloads are driving data intensive challenges that can only be met with accelerated infrastructure, such as IBM’s POWER9. The University is leading the way with this impressive project and will continue to attract world-class researchers with this type of innovation.”

Energy efficiency is also key, and the University has shown its commitment by investing in the reduction of energy consumption. The University boasts the UK’s first purpose built water-cooled research focused datacentre meaning that 85% of the heat is recovered directly through the water-cooled systems, delivering impressive energy savings by minimising the cooling overheads. The top end range of IBM POWER9-based AC922 servers includes warm water-cooled nodes, where water is taken directly across the CPUs and GPUs at temperatures up to 35C. A unique installation in the UK, the data centre doesn’t use any air-cooling systems and accommodates the IBM systems running alongside “direct to node” water cooled technology from other vendors.

Thompson concludes: “With OCF as our partner, we have the right guidance, skills and expertise to continually move BEAR forward. It’s not just about having the largest cluster, it’s about providing cutting-edge HPC tools for our researchers from both traditional and non-traditional disciplines, who will be able to process data faster and generate new findings, achieving greater research impact.”

This article has been republished from materials provided by OCF. Note: material may have been edited for length and content. For further information, please contact the cited source.