A Cell Atlas of the Mouse Brain: A Step Towards Brain Simulation?

Ruairi is a senior science writer at Technology Networks. He holds a Master's degree in clinical neurosciences from the University of Cambridge and has written for Technology Networks since 2018.
Learn about our editorial policies
The Blue Brain Cell Atlas lets you visualize cell in the mouse brain using punchy color coding. Credit: ©Blue Brain Project/EPFL 2005 – 2019. All rights reserved.

Complete the form below and we will email you a PDF version of "A Cell Atlas of the Mouse Brain: A Step Towards Brain Simulation? "

As I swoop down through the mouse’s cerebrum, a bright buzz of red, excitatory neurons gives way to a deep core of blue inhibitory signaling, which rises up to a powerful cyan as I navigate towards the dense frontal cortex. Switching to a deeper view, I reach the brain stem and inspect the intricate meshwork of oligodendrocytes, astrocytes, and microglia. This is probably what it feels like to be a synesthetic brain surgeon, and it’s all being played out on my computer screen.

This is the Blue Brain Cell Atlas, and it looks really cool.

The Atlas, a 3D recreation of every cell in the mouse brain, is the work of the Swiss EPFL’s Blue Brain Project, a vast effort with the goal of digitally reconstructing and simulating the mouse brain and ultimately, the human brain. The Project is directed by Prof. Henry Markram, who also founded the European Human Brain Project.

I’ve been offered the chance to speak to two of the researchers behind the Atlas, Csaba Erö and Dan Keller, who co-published the Atlas in the open access journal Frontiers in Neuroinformatics in November 2018. My deep dive into the multicolored Atlas is a small piece of prior research, and, at least on a visual level, I’m impressed. The Atlas is an ethereal 3D representation of a mouse brain, which, upon loading, I find floating in a black void. By selecting different brain regions in the Atlas’s controls, I can bring up color-coded representations of different brain regions, with neurons represented by tiny dots within each structure.

The missing piece in brain research

There’s a lot of data contained here, but the Blue Brain team had a helping hand in getting started, using the vast archives of the Allen Institute for Brain Science. Erö, who has recently taken up a postdoctoral position at the EPFL Blue Brain Project after finishing a 5-year PhD with the Project, explains, “We found out that the Allen Institute had these stacks of microscopy images that they had recorded from entire mouse brains and so while the data wasn’t explicitly there, it was implicit in the already released data. So then we simply developed methods to extract the density information and distribution of cells for the entire mouse brain volume from these existing datasets.  Then we also combined these relative densities with existing reported numbers for the number of cells in the whole brain.”

Erö and Keller hope that the Atlas can become the repository for accurate cell density and location data that has been missing from brain research up until now. Whilst the Allen Institute has detailed maps of gene expression information for both the human and mouse brains, density and cell number information has been scarcely accessible; the Blue Brain team were only able to scrape about 4% of the mouse brain’s cell data from other sources prior to their own efforts. Now, the Atlas can fill the cell number gap for the other 96% of brain regions. 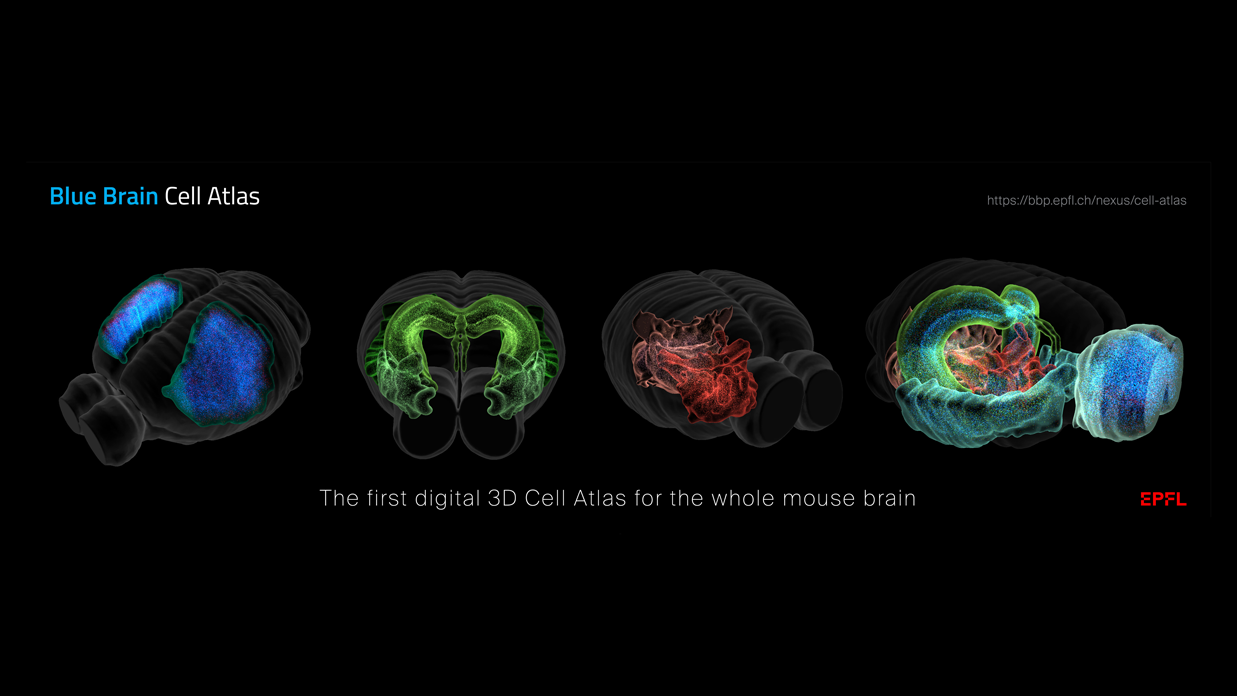 A day inside the mouse brain

How would the Atlas benefit researchers day-to-day? There are two main uses, says Erö, “The first one would be to look at the overall statistical distribution of different cell types in the brain. For example, if somebody is interested in finding out how the oligodendrocytes or astrocytes or even the inhibitory neurons are distributed throughout the brain – which region has more of them, which region less – then they can go into the Atlas and they can just select any region that they want and the Atlas will display the total number of those cell types in that region and also the density.”

The second use of the Atlas opens a door towards the goal of simulation. “Anyone can download the concrete positions and types of all the cells in the brain, up to 10 million cells, and they can also filter them by single regions. So, therefore they can use these positions to build their own in silico models which they can then connect and simulate. So this can even be the entire brain, or simply just a subregion which they can download and then they will have an anatomy with an accurate representation of how the cells are in that region so they can build their own models on top of it.”

This second ability is what makes the Blue Brain Cell Atlas unique, says Keller, the molecular systems group leader in the Project’s Simulation Neuroscience division. The version of the Atlas published in November is simply the first in what the team hope will be a constantly improving, iterative process. Researchers can feed back in their own estimates of cell location and density in different regions into the Atlas. “Far from being a static atlas, I think we would expect it to evolve with time to represent this additional detail,” says Keller.

Simulating the brain: a work in progress

This seems to be a key point; the Atlas is not a “finalized” product in the same way that a roadmap of downtown New York City is final (barring any particularly outlandish urban remodeling attempts). The fundamentally plastic nature of the brain – without which we’d never be able to learn or adapt to our environment – means that the Atlas can’t be compared to a geographical map, says Erö. Imagine a city map, but with only the rough overall layout and the number of landmarks and crossroads detailed, and you have an approximation of the information the Atlas can currently give.

Erö and Keller are clear about how they imagine the Atlas will benefit other researchers, but I am keen to hear how it will bring the team closer to their ultimate aim of simulating both the mouse and human brain. Erö  gives a measured response: “The Atlas is only a glimpse of our knowledge of the cellular composition of the brain at this current time, it is a resource that can also independently evolve and improve in time by reporting the right densities for the entire brain and therefore provide the rest of the project with this kind of information.”

“Everything we do in the project is actually based upon the cell atlas. So for example, we’re now adding connectivity information to the regions and cell types defined in the Atlas. So, there was a very tight correspondence between the Atlas and the simulation,” adds Keller. 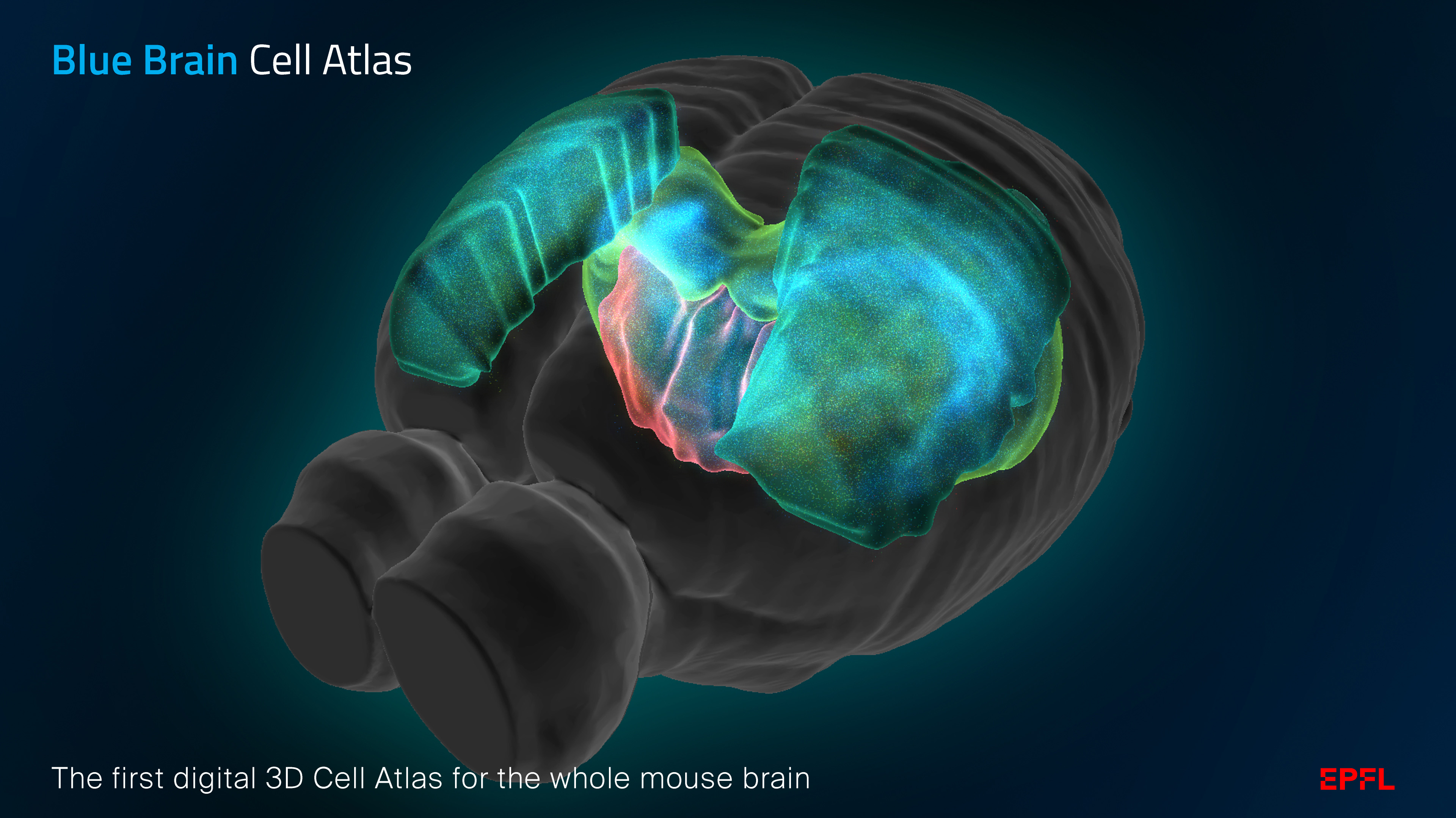 But they also concede that the Atlas represents a step only towards a complete mouse brain simulation. The Allen Institute’s data is nowhere near as rich for the human brain, which is vastly more complex, and less well studied. The same workflow they have used on the Atlas could be used to begin a human equivalent, but at the moment, the team’s attention seems to be squarely on the mouse brain. Markram’s initial Nature Reviews Neuroscience paper included the prediction that the mammalian brain could probably be simulated within a decade.

Thirteen years on, simulation remains a lofty goal. Some detractors have even questioned whether simulation is the right path to go down. Prof. Markram responds to this point in an email: “It took us ten years to present the first draft digital reconstruction of the microcircuitry of somatosensory cortex of juvenile rat. However, since then, the knowledge developed plus the data, tools, software and computer power we have assembled, has enabled us to reconstruct other regions at a quicker pace. This includes a digital copy of the whole somatosensory cortex with around four million neurons, a part of the hippocampus and a microcircuit of the thalamus. By the end of 2019, this will include the entire thalamus and the neocortex. This will then give us the platform to build a complete digital copy of the mouse brain.  In the meantime, we will continue to share data, models, tools, software, papers and massive open online courses on the Blue Brain Portal.”

The Atlas, then, is an undeniable first step, a waypoint in that mission.

Keller returns to the geographical map analogy in a way that seems emblematic of the team’s approach to the project as a whole, “If you look at the history of the geographical maps, you see that the Ancient Greeks and Romans had a really good idea of what was very close by, and then farther out it was more amorphous. As time progressed the breadth of what was known expanded, with every map building upon its predecessor.”

“Each iteration was a stepping stone to a more improved understanding of where things are,” he continues. “It stands upon the shoulders of giants, for example the vast effort of genome data put forward by the Allen Institute and the efforts of people to discover markers for the different cell types used. So there are a lot of preceding efforts that we are building upon.” The neuroscience community awaits the final product of these efforts with bated breath.

Complete the form below to unlock access to this Audio Article: "A Cell Atlas of the Mouse Brain: A Step Towards Brain Simulation? "