Ruairi is a senior science writer at Technology Networks. He holds a Master's degree in clinical neurosciences from the University of Cambridge and has written for Technology Networks since 2018.
Learn about our editorial policies
Could repurposed drugs bring relief to a dry discovery pipeline?

A lot of time, effort, and money goes into making drugs. But they don’t always work. When billions are piled into the development of these compounds, it’s surprising, and a little depressing, to think that companies will simply put them on the shelf to gather dust.

But sometimes, drugs can be dusted down and repurposed. Giving these drugs a second chance can be a far less expensive (but just as efficacious) way to develop treatments. That’s exactly the route that Katexco Pharmaceuticals has taken with its new immune system-targeting compounds.

Drug discovery can also throw up opportunities from the most unlikely of places. Katexco’s compounds are a perfect example. “I love talking about it because it’s so unexpected,” says CEO Dr Jonathan Rothbard. Katexco’s discovery pathway began during experiments to determine the biggest protein contributors to the lesions caused by multiple sclerosis (MS). Working with post-mortem brain samples, Rothbard’s team quantified RNA and protein in the lesions, which produced surprising results: “In both cases the most prominent entities were small heat shock proteins (HSPs). At that time, these were known only to be present in the lens of the eye, so we were very confused about how to interpret that data.”

Subsequent work showed that mouse models for MS had significantly worse symptoms if they were genetically engineered to have no HSPs. In other mice, symptoms improved when they were injected with the proteins.

It’s one thing to develop a treatment but working out exactly why it works can be a greater challenge. In Rothbard’s case, the answer came through collaboration with immunologist Kevin Tracey, whose work focused on a neuroimmunological pathway centered on the vagus nerve that runs from gut to brain. The HSP proteins were shown to target a key receptor in this pathway, the nicotinic acetylcholine receptor (nAChR). The nAChR, to the team’s relief, was one of the therapeutic targets that had been left on the shelf decades previously. Rothbard explains: “The reason we are in such a great position is that the receptor was worked on by large pharmaceutical companies for 20 years. They dissected it, understood it and developed a whole set of small molecules that went through human clinical trials. They all failed because they chose much more difficult indications, such as Alzheimer’s disease and schizophrenia. They then put those drugs on the shelf and washed their hands of them. We are able to reactivate those programs, not by licensing their drugs – because their half-life’s too short – but rather by taking features of a couple of them, combining them to make a new drug, and giving ourselves a pathway for an inflammatory therapy.”

Having patented this protein therapy, Rothbard and his team realized there was to be little competition from other companies. “No one really cared because the protein was too large to be easily or readily available therapeutically,” he says. But the team were able to dramatically reduce the size of the protein, down to just six amino acids. 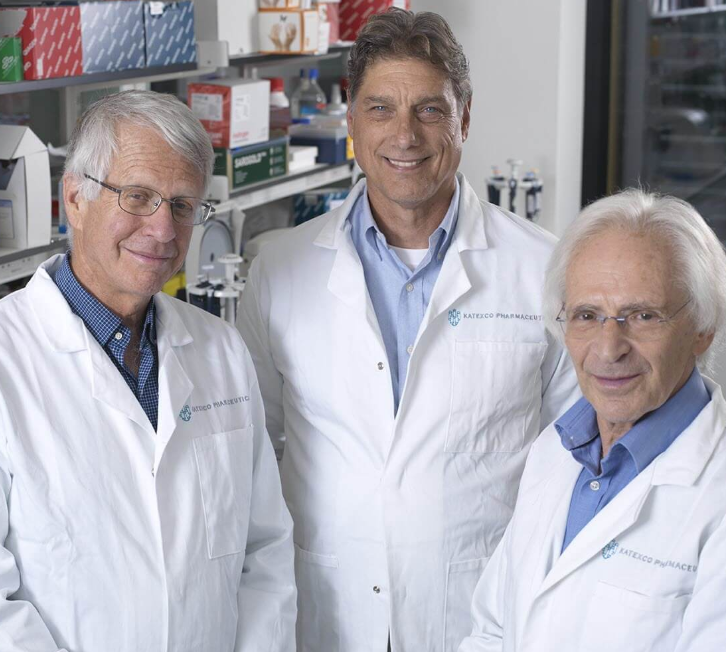 Katexco co-founders Prof Lawrence Steinman (L). Dr Jonathan Rothbard (Center), and Prof Sir Marc Feldmann (R).
Katexco’s nAChR agonist, says Rothbard, could have very broad indications, with its three-pronged immunosuppressive action – which targets cytokines, converts inflammatory molecules to regulatory types, and induces autophagy – having potential use in treating ulcerative colitis and Crohn’s disease as well as MS. The big question mark for any drug that claims to treat a neurological disorder like MS is whether it can bypass the brain’s natural protective defense, the blood-brain barrier. I ask Rothbard if this will be a challenge for his agonists. He laughs: “The large pharmas have done the job for us because they purposely were targeting the brain for Alzheimer’s and schizophrenia.”

When the body’s defense backfires

Our immune system is our best biological defense but can be devastating when it turns against our body. The number of diseases with immune components means that Rothbard isn’t content with his nAChR agonists. He reveals to me that he will soon be working with a much wider set of anti-inflammatory therapies. He wasn’t joking. Since our interview, Katexco has merged with two other pharma companies, CannBioRex Pharmaceuticals and 180 Therapeutics, to form a parent company, CannBioRx Life Sciences.

Rothbard has some esteemed company in this venture; CannBioRex was founded by Professor Raphael Mechoulam, the discoverer of marijuana derivative cannabidiol (CBD) and its fellow cannabis compound tetrahydrocannabinol (THC). The company has developed a host of therapeutic CBD analogues. Rothbard says these molecules, which target cannabinoid receptors (CBRs), could have a pain-relieving action. Mechoulam’s co-founder is Professor Sir Marc Feldmann. Feldmann, who is also the founder of 180 Therapeutics, pioneered anti-TNF therapy, which now forms the backbone of that company’s antibody Humira® (adalimumab).

Rothbard sees the three companies working side-by-side, targeting three levels of therapeutic benefit. “We have three different programs with three different drugs of different potencies. So for instance, the anti-TNF is an injectable biologic, it’s both the most expensive but most potent therapy. The nAChR receptor program should produce something that’s orally bioavailable and of intermediate potency and the CBD analogues will be the least potent.  They could be taken almost like a Tylenol. So, eventually, you might just take the CBD analogue over the counter, then you will follow it with the prescription for the nAChR, and then an anti-TNF, depending on how severe your indication is.”

The vast unmet need for anti-inflammatory and pain-relieving drugs capable of bypassing the crippling addiction crisis caused by opioids cannot be understated. Rothbard’s compounds are still in development but are part of a wider trend of drug therapies using both innovative approaches (like repurposing drugs sitting on the shelf) and novel targets (like the CBR and the vagus nerve) that could help bring relief to a dry drug pipeline. Rothbard hopes that by exploiting the body’s own systems, the compounds will have a greater success rate, “By stimulating the vagal nerve, we are using the naturally occurring pathway that mother nature has evolved to connect the gut and the brain. I am a huge fan of doing something that evolution has chosen to control and that’s why we’re so excited about the high probability of success.” Many millions of patients with unmet clinical need are counting on that probability becoming a certainty.

Complete the form below to unlock access to this Audio Article: "Anti-inflammatory Drugs Resurrected To Fight Chronic Pain "