Complete the form below and we will email you a PDF version of "Calling Citizen Scientists! Researchers Ask for Ten Minutes of Your Time To Help Fight Huntington’s"

A new phase of a research project has asked for help from the public in the fight against the fatal neurological condition Huntington’s disease (HD).

The project, named “Science Scribbler” has been organized by Diamond Light Source, a facility in Oxfordshire that houses the UK’s national synchrotron light source. Launched on November 9th, the second phase of “Science Scribbler” has tasked interested wannabe researchers with improving their artificial intelligence algorithms by taking ten minutes out of their day to look through microscope images produced at the facility.

The project, which has been organized in collaboration with the Wellcome Trust and Oxford University, initially launched back in February. In the project’s first phase, researchers asked citizens to annotate structures called organelles within images taken using a technique called Cryo Soft X-ray Tomography (cryoSXT) . In a press release, TTP Labtech’s Michele Darrow, a collaborator on the project, explained: “Ultimately, the aim of this project is to better understand protein misfolding disorders, such as Alzheimer’s disease and Huntington’s disease, where a protein takes an abnormal structure and loses its normal cellular function, which can lead to manifestations of the disease. This project tests the hypothesis that the presence of Huntington protein aggregates leads to structural changes in the cell, which can be understood by analyzing cryoSXT images.” 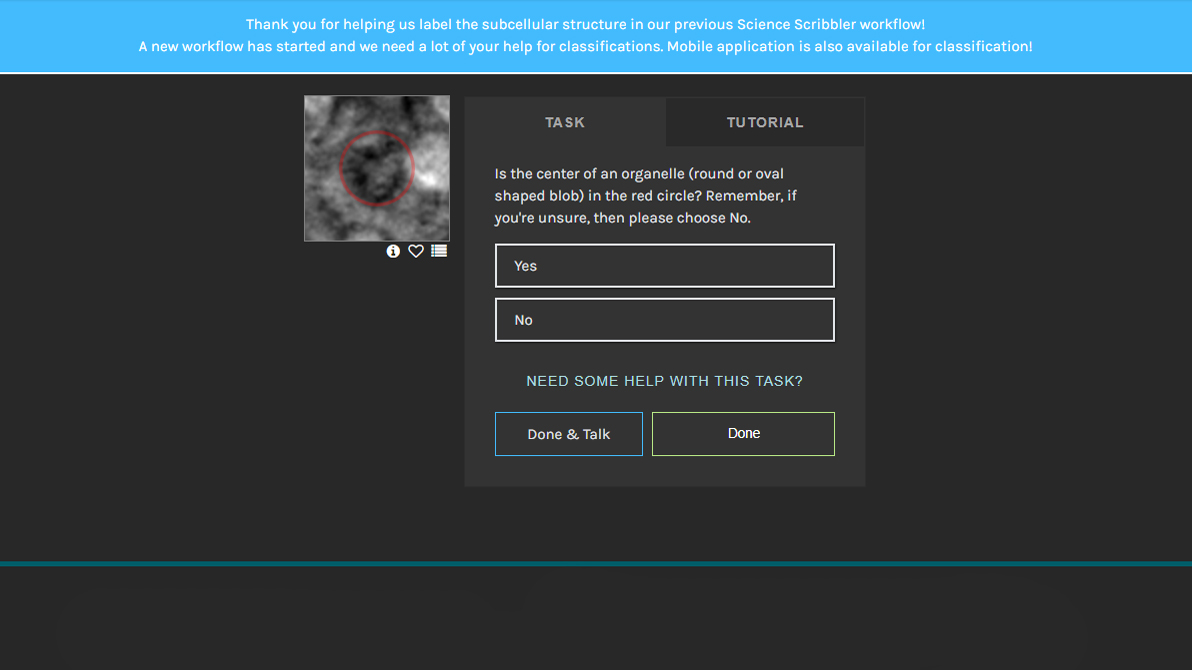 A screenshot from “Science Scribbler”. Credit: Diamond Light Source/Oxford University/Wellcome Trust via Zooniverse Project
The project is hosted on Oxford’s Zooniverse Project website, where the raw data annotated by helpers in the first stage of the project is now ready and waiting to be analyzed. Users are asked to verify that the images have been annotated correctly by ensuring that organelles are contained within the areas marked out in phase one.

Can you help train AI?

All the training required is provided on the site, which can be accessed on PC, tablet or phone. Ultimately, the researchers hope that the annotated and verified data will be used to help train AI algorithms, which could dramatically speed up projects that traditionally required a small team of researchers to go through huge reserves of data themselves.

Summing up the project’s value and next steps, Professor Dave Stuart FRS, MRC Professor of Structural Biology at the University of Oxford and Life Sciences Director at Diamond Light Source said, “Using the power of crowdsourced knowledge and everyday citizens passion for scientific progress, this project is allowing researchers to take big leaps in learning, training artificial intelligence systems, improving data analysis, and more. By using synchrotron science, and cryoSXT imagery, we are aiming to advance our understanding of protein misfolding disorders.”

The team plan to set more tasks for their citizen scientists over the next few years. “This will help train AI systems and develop new ways of segmenting data, with the aim to automate the data segmentation processes.Doing this will dramatically speed up scientists’ ability to understand their research data in a matter of days rather than the current weeks, allowing for a faster path to understanding disease structures, and perhaps speeding up pathways to drug development,” concludes Stuart.

Complete the form below to unlock access to this Audio Article: "Calling Citizen Scientists! Researchers Ask for Ten Minutes of Your Time To Help Fight Huntington’s"