Complete the form below and we will email you a PDF version of "Citizen Neuroscience: People Power Increase Brain Mapping Speed"

Big initiatives to understand the workings of the brain

Neuroscience has a data problem. In our efforts to understand the brain researchers are generating ever greater amounts of data. The problem is, how can they gain meaning from it?

A recent study, that used functional magnetic resonance imaging (fMRI) data to produce the most detailed map to date of the human cortex, looked at data from 210 peoples’ brains. The researchers estimated that equated to 30 gigabytes of data per participant. Meaning over 6 terabytes of data were analyzed to form the map, and this was a study of a large section of cortex, not the whole brain.

The upside of this work is that it will shed light on the workings of human brains in health and disease. The drawback is that, despite the large datasets produced, researchers can only resolve small areas of the brain, not individual neurons within those areas.

To image individual neurons and understand how these are connected, you need to look inside the brain, under a microscope.

Rats and mice are mammals, and they share similar brain structures to that of humans, only smaller. By exploring brain cell activity and connectivity in rodent brains the ambitious European Blue Brain Project aims to build a computer representation of the human brain. They plan to achieve this using advanced mathematical techniques and IBM’s Blue Gene supercomputer.

An alternative, yet equally ambitious project from the Allen Institute for Brain Science, called the Allen BRAIN Initiative launched in 2016, this set out to build on its genetic and structural maps of the mouse brain by incorporating morphological (shape), genetic and electrical activity data from individual cells. From this, they aim to classify all of the neurons in the brain and build a functional map of the neurons and how they’re connected, called the connectome.

Their approach is to use a strategic conveyor belt of expertise, as Alex Henry from the Allen Institute explains, “The process starts with thin slicing of the brain tissue into 350 micrometre sections, these are oxygenated in a chamber before they pass to our electrophysiology team who investigate the electrical activity of the living neurons in the visual cortex.”

Read more: the future of electrophysiology

“Following this, the cells are filled with a special dye called biocytin which fills the entire cell, right to the tips of its dendrites, the tree like structures that extend from its cell body, down to the terminals of its axon, the long thin, highly branched process that carries the electrical outputs of the neurons.”

The dye-filled cells are then imaged at 63x magnification using brightfield microscopes. These detailed 3D imaging volumes can be upwards of 100 gigabytes in size, and this is just for a single neuron.

Mozak (which means ‘Brain’ in Slavic languages) is a free, fun and engaging computer game developed by a team at the University of Washington’s Centre for Game Science. Players trace neuronal projections in three dimensions and are scored on their accuracy of tracing.

As its Director, Prof. Zoran Popovic explains, “Computer controlled microscopes are producing increasingly larger amounts of neuronal volume data, and this data isn’t being reconstructed nearly as fast as it is being produced. This is creating a bottle neck in the advancement of neuroscience objectives, especially for the classification of neurons which is one of the key objectives of the Allen Institute’s Brain Initiative.”

One way to overcome this bottleneck is to use people power. By making neuroscientists of the public the number of cells that can be mapped is dramatically increased. Citizen science initiatives in neuroscience have previously proven successful, such as Sebastien Seung’s Eyewire, a game that got citizens to trace and reconstruct neurons from electron micrographs of the retina, leading to the in-depth solving of the structure of a large segment of retinal tissue.

The video shows a volume reconstruction of 950 nerve cells in a block of mouse retina while 'flying' along the blood vessels (appearing as "tunnels" in the dense web of neuronal processes). Each color represents one neuron. Credit: Max Plank Institutes for Medical Research, Heidelberg.

Mozak facilitates the reconstruction of whole neurons seen in 3D and provides feedback to the user on how well they are mapping neurons. An algorithm runs in the background that scores each point of reconstruction of the same neurons between users. This means a consensus of the shape is built up from the views of at least five different people.

“This is different to the situation in a lab where one postgrad or postdoc might be reconstructing neurons.” Adds Zoran, “There you only get one person’s representation of a cell. Mozak enables the generation of a consensus view of a neuron’s reconstruction, and this can then be assessed by experts at the Allen Institute, who provide feedback and curate the neuron into its different functional segments, like dendrites, cell body and axon.” 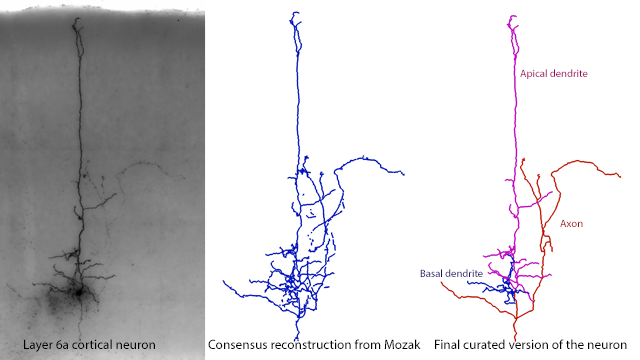 A neuron from layer 6a of the visual cortex (left) is reconstructed by citizens using Mozak (blue) and is then curated by experts at the Allen Brain Institute, detailing the different compartments of the cell: apical dendrite (pink), basal dendrite (blue) and axon (red). Credit Allen Institute for Brain Science.

Solving neuronal morphology in this way has the potential to dramatically increase the speed at which the Allen Institute produces reconstructions.

And, Alex confirms that Mozak reconstructions have contributed to solving some of the ~700 cells so far reconstructed by the BRAIN Initiative’s processing pipeline. These cells also include electrophysiological data, and provide a valuable resource for neuroscientists the world over.

This type of data is especially powerful for theoretical neuroscientists who make mathematical models of neuron behavior. Knowing the dimensions and thickness of cells, and their processes, combined with their electrical activity data is crucial for computer modeling which can also help further characterize the neurons into groups.

Looking to the future
Zoran has big plans for Mozak and citizen neuroscience, “Mozak is the start of an ambitious project to be the nexus point of all citizen science in neuroscience. We aim to build a taxonomy of all neurons, to understand how the structure or shape of the neuron relates to its electrophysiological properties. And then to understand how these neurons are connected, to map the connectome.”

His ambitions are not unfounded, Zoran’s previous citizen science project, Foldit, recruited the public to solve the structure of complex proteins, and had a significant impact on the field of biochemistry.

Zoran adds, “The beauty of Mozak is that it’s not dependent on data type, it can look at volume data from many different types of data repositories from around the world. The Allen BRAIN Initiative is just one such repository.”

Using citizens to solve the structures on their web browsers is relatively low tech, but an extremely powerful way of analyzing data that can overcome the bottle neck described previously.

If citizens take up the challenge and solve neuronal morphologies using Mozak, a significant dent in characterizing the 86 billion neurons that exist in the brain could be made. And, as Zoran suggests, this could potentially lead to a completely new understanding of neuronal classification. This will affect our understanding of brain disease and provide new avenues for drug discovery.

As Alex summarizes by analogy to Pokémon Go, “We now have the tools to characterize all the neuronal cell types in the brain, we just need to get out there and catch ‘em all!”
Meet The Author