Santiago Ramón y Cajal is rightfully described as the father of modern neuroscience. His detailed drawings of brain cells have inspired generations of neuroscientists to pursue the final frontier of biology, unlocking the complexity of the brain to understand its secrets.

Armed with the Golgi stain, a method that involves randomly labeling cells with silver chromate, a light microscope, his notebook, pen and ink, Ramón y Cajal recreated the fine structures he saw under his microscope. Work for which he was awarded the Nobel Prize in Physiology and Medicine in 1906.

In addition, he correctly described neurons as discreet units. This was controversial at the time, as it argued against the accepted dogma of reticular theory, which suggested brain tissue was a single continuous network.

In this article, we compare two of his drawings with modern images of the same brain regions and describe the modern-day techniques used to obtain them.

In this first drawing, Cajal depicts the Calyx of Held. First described by the German anatomist Hans Held, the Calyx is a giant presynaptic terminal which appears like a hand enclosing a fist, or a ball in a catcher’s mitt, as it synapses onto the cell body of its postsynaptic partner. This specialized synapse is important in the auditory system and is part of the circuitry that enables us to identify the direction of a sound. 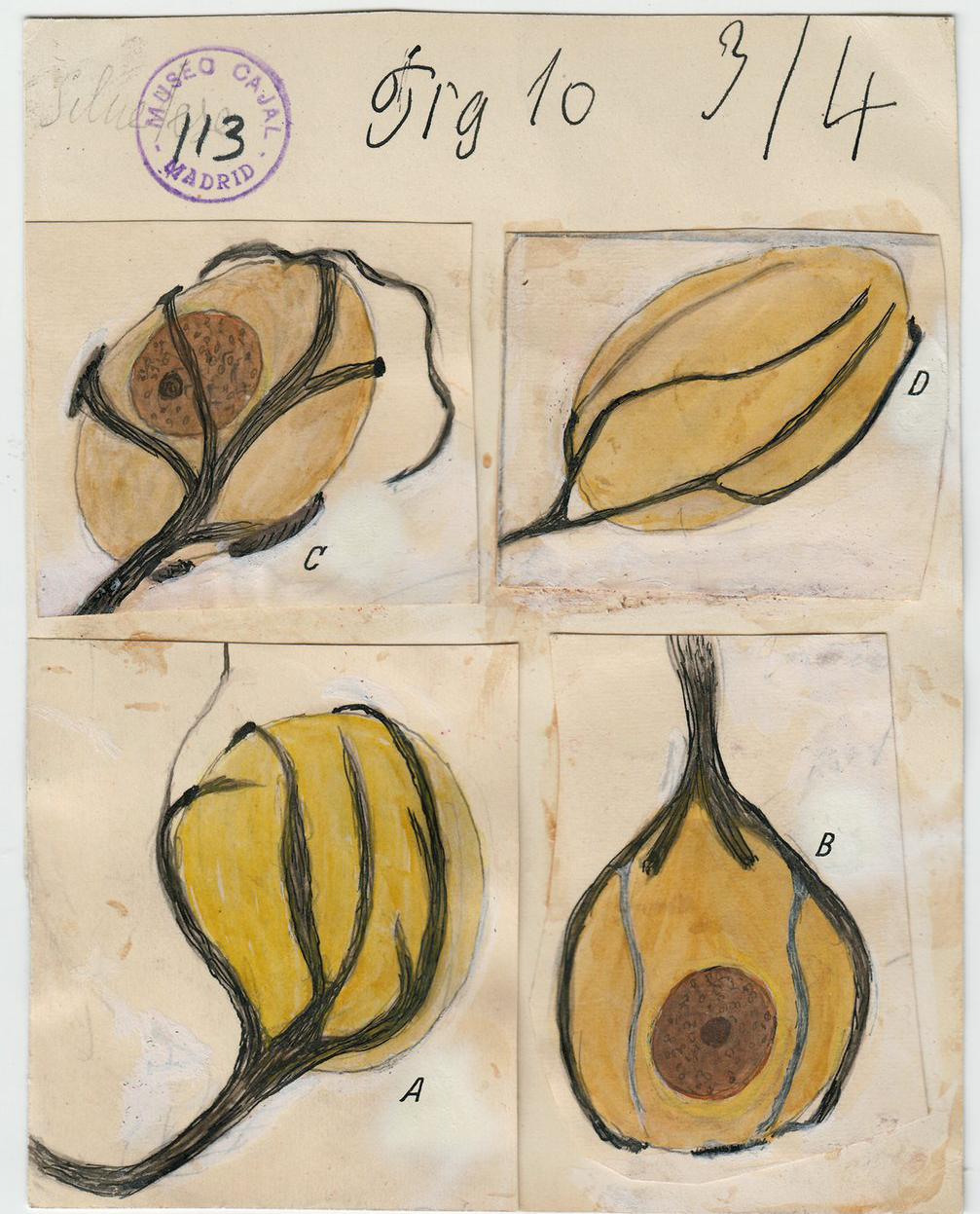 Neuroscientists can now view and recreate these presynaptic structures in 3D. The video below is of Calyces filled with a red dye, called Dextran-Rhodamine. You can clearly see the long axon cables terminating in these special calyx endings, like little red fingers. The image was made using a 2-photon laser scanning microscope which can resolve structures up to 400 micrometers deep in tissue, preserving their 3D shape. The image is a reconstruction of many 2D scans of the tissue at different z-positions, called a z-stack - Imagine looking down onto an apple then slicing the top off, then slicing a bit more and so on until you have cut all the way through the apple, now put the pieces back together to view the whole apple.

Cajal could only have resolved cells and structures in sections of fixed tissue up to 100 micrometers thick, as thicker specimens would have blocked light transmission.

The 3D reconstruction makes It easy to imagine the red fingers wrapping around the postsynaptic cell body, just like Cajal drew over 100 years before in spite of his technological limitations.

3D reconstruction of Calyx of Held terminals. Imaged by Kopp-Scheinpflug and Forsythe.

Among the other brain structures drawn by Cajal is his study of the retina. The complexity of this structure is beautifully depicted in Cajal’s drawing. Cajal clearly defines the different layers of the retina, even depicting the difference between rod and cone cells at the top of the picture. These are the specialized cells activated by light which initiate the signaling cascades that enable us to see. 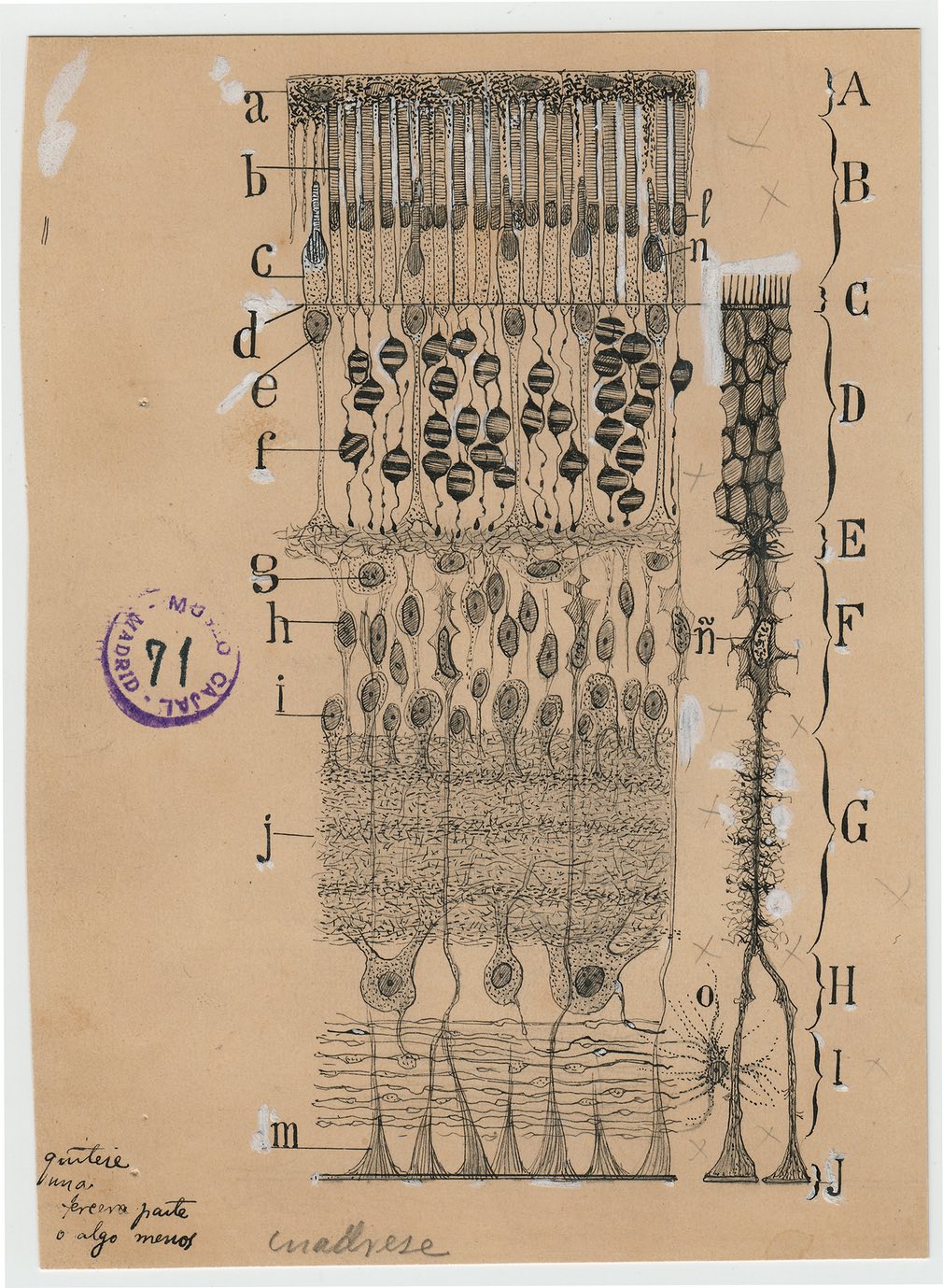 Neuroscientists have since characterized the cell types that exist in the retina and how they are connected. The following example used cutting-edge techniques to map the ‘connectome’ of one layer of a block of retina. Investigating the inner plexiform layer, the scientists combined an electron microscope with a microtome to take electron micrographs of serial sections of the retinal layer. They then used computer algorithms and trained undergraduate students to recreate the paths of neurons through this layer. This painstaking effort combining computer power and many man hours resulted in the retinal fly-by video featured below. In the video, you fly through the blood vessels in the layer as you pass by 950 neurons. The video is a fantastic illustration of the complexity in just one of the layers that make up the retina.

Fly-by view of the inner plexiform layer of the retina. Each different colour represents a single neuron and the tunnels are blood vessels. Video from Helmstaedter et al. (2013).

Despite the advances in imaging and neuroscience techniques made since Cajal produced his drawings, they are still relevant today. The insight gained from looking at his faithful reproduction of what he saw down his microscope have formed the basis of the field of neuroscience. And this is why his drawings continue to capture the imagination of both experts and the public the World over.

Complete the form below to unlock access to this Audio Article: "From Cajal To Now"