The brain is immensely complex, but there are ways we can divide up its anatomical structure: the left and right hemisphere, parietal, temporal, occipital and frontal lobes. Another common divider is to separate the brain’s gray and white matter. But what are these two structures? How different are they from each other? How significant, and physiologically relevant, is this divide? Read on to find out!

Differences between gray and white matter

What is gray matter?

Gray matter consists primarily of neuronal cell bodies, or soma. This a spherical structure that houses the neuron’s nucleus. The soma also contains the cell’s cytoplasm, in which other essential organelles, such as mitochondria, can be found. When analyzed postmortem, these cell somas appear gray. But the “gray” matter of the living brain, when circulation is still in effect, is actually tan in color.

What is the function of gray matter?

The neuronal soma, and the organelles and nucleus within, is the control center of the neuron. Physically, it the point of the neuron from which other connections, such as axons and dendrites, spread.  Synaptic input from neighboring neurons can feed onto the soma.

The soma also houses essential structures that are common to all cells, such as:

Gray matter rich areas, such as the cerebellum and cerebral cortex, have important functions in the brain.

The cerebellum was thought to be mainly involved in fine control of movement, but recent research has established the role it plays in cognition and emotional processing. The cerebral cortex is the primary site of cognition in the brain and is divided into numerous functional areas, including those responsible for memory, reasoning, senses and language.

What is white matter?

White matter-rich areas of the brain mainly consist of myelinated axons, which are long relays that extend out from the soma. These axons are whiteish in color due to the relatively high lipid fat content of the myelin protein that sheathes them. Axons form connections between brain cells and are usually distributed into bundles, called tracts, in the central nervous system (brain and spinal cord) or nerves (peripheral nervous system).

What is the function of white matter?

Neuron-rich brain regions wouldn’t count for much without the rich veins of axonal connections contained within white matter to join them up.

Axons are the structures that allow nerve signals to be transmitted at high speeds. Myelin is key to this communication. The protein acts as a form of insulation and forces ion channels to group together in short unmyelinated gaps called nodes of Ranvier. This causes the nerve impulse signal to “jump”, which is integral to the rapid communication that facilitates the sensory and motor functions of the mammalian brain.

Myelin is deposited onto axons by glia (non-neuronal cells) called oligodendrocytes. These cells will reactively wrap myelin onto nearby surfaces when cultured in a dish, but, through mechanisms that are not fully understood, are able to target specific axons for myelination. Myelin thickness and length also varies in response to unclear organizing principles throughout the brain. Not every axon is myelinated – some, even those bundled into myelin-containing tracts – remain unsheathed. One estimate suggests that only 30% of the mouse corpus callosum (the bundle of nerve fibers connecting the hemispheres of the brain) is myelinated.

The axon may, in terms of volume, represent more than 95% of the total neuron. Axons range in length, from a few hundred micrometers up to over a meter. Their diameter is between 1 and 25 μm.

Not quite. While the above division is physiologically accurate on a system level, there are a mix of cell types present in both gray and white matter.

How are gray matter and white matter arranged in the CNS?

Both gray and white matter are spread throughout the human central nervous system – the brain and spinal cord. Where are they located? Figure 1: The arrangement of white and gray matter in the brain.

Neuronal cell bodies are abundant in the cerebrum, brain stem and cerebellum. This latter structure, which makes up just 10% of brain volume, contains more neurons than the rest of the brain put together. In the cerebrum, gray matter is primarily found surrounding white matter in in the brain’s external areas. This coating of neurons surrounding the cerebrum is known as the “cortex”, taken from the latin for “bark”.  Regions of gray matter that are located in deeper regions of the brain are called nuclei.

Gray matter-heavy brain regions include those that control muscular and sensory activity.

In the spinal cord, gray matter is conversely located towards inner regions and forms a “butterfly” structure, which can be visualized below in figure 2.

So which regions of the central nervous system have an external layer of gray matter?

The cerebrum and cerebellum are the brain regions which have an external layer of gray matter (figure 1). The brainstem’s gray matter is located in groups of neurons called nuclei which are embedded within white matter tracts.

In the spinal cord, things are largely reversed – the white matter is distributed around the central gray matter “butterfly”. 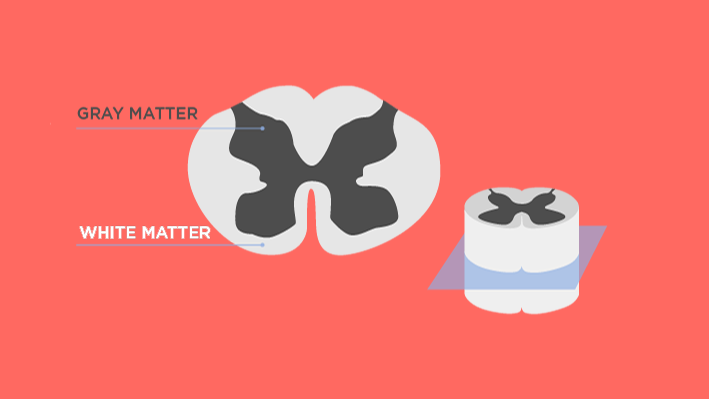 Figure 2: The arrangement of white and gray matter in the spinal cord.

Diseases of gray and white matter

Diseases that cause the loss of the neurons that make up gray matter are primarily called neurodegenerative diseases. These diseases, which include dementias like Alzheimer’s disease and frontotemporal dementia, affect millions of people worldwide. White matter alterations are often present in these diseases, but physiological hallmarks such as amyloid plaques and tau neurofibrillary tangles are located in the gray matter. As might be expected, the region where neurons are lost largely dictates disease progression – the motor symptoms of Parkinson’s disease are directly related to the loss of dopamine-producing neurons in the substantia nigra.

As James Balm phrases it in this article, white matter tracts are the subways of the brain, vital connections that ensure the smooth operation of our nervous system. As such, disease that affects our white matter can disrupt this nerve signal transit and can be a serious issue.

Complete the form below to unlock access to this Audio Article: "Gray Matter vs White Matter"