How Does Vagus Nerve Stimulation Impact the Gut–Brain Axis?

Molly Campbell is a senior science writer at Technology Networks. She holds a first-class honors degree in neuroscience. In 2021 Molly was shortlisted for the Women in Journalism Georgina Henry Award.
Learn about our editorial policies
Credit: iStock.

Complete the form below and we will email you a PDF version of "How Does Vagus Nerve Stimulation Impact the Gut–Brain Axis? "

The gut–brain axis is a communication network that links the central nervous system and the gastrointestinal (GI) tract. Sensory signals are received by the brain from the stomach via afferent nerve fibers, which trigger neurological responses that are fed back to the periphery via efferent nerve fibers. Sensations such as feeling full or hungry are attributed to the processes of the gut–brain axis.

Efferent nerves – also known as motor neurons – carry signals from the brain to the periphery, initiating a physiological response.

The vagus nerve – sometimes referred to as “the wandering nerve” due to its long, winding pathway through the human body – is a key player in the gut–brain axis. Receptors located in the stomach wall trigger signals regarding how “full” the stomach is, which are delivered to the brain via the vagus nerve. Once processed, these signals are relayed via efferent vagal signaling to the GI smooth muscle, helping to modulate muscle movement and aid digestion.

The role of the vagus nerve in regulating digestion speed is well understood. However, whether vagal stimulation can lead to more widespread effects across the brain, affecting regions that are involved in higher-order cognitive functions, like goal-directed behavior, wasn’t known – until now.

Professor Nils Kroemer, researcher in the neuroMADLAB at the University Hospitals of Tübingen and Bonn, studies the neurobiological principles of motivation, action and desire. Earlier this year, Kroemer and colleagues published a study that showed – for the first time – how non-invasive stimulation of the vagus nerve can strengthen the communication between the stomach and the brain within minutes. Using non-invasive techniques to record the stomach and the brain, the researchers were also able to demonstrate how this coupling effect spreads across sub-cortical and cortical regions of the brain. The findings could have therapeutic applications, as some mental disorders are characterized by reduced sensory input to the brain. 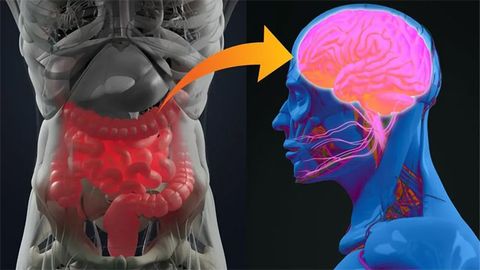 END_OF_DOCUMENT_TOKEN_TO_BE_REPLACED

In this Ask the Researcher, we interviewed Kroemer to understand the technologies that made this study possible, and how this research enhances our knowledge of gut–brain communication.

Molly Campbell (MC): Can you describe your laboratory’s focus – the neurobiological basis of motivation, action and desire (neuroMADLAB). How did this line of work evolve?

Nils Kroemer (NK): Motivation is a crucial element of our daily lives. Not surprisingly, motivational dysfunctions are often observed across various mental disorders, such as major depressive disorder, leading to substantial impairment. Yet, we currently lack swift and effective treatments for many motivational dysfunctions. The mission of our lab is to identify neurobiological mechanisms of action and desire to evaluate their translational potential in improving aberrant motivation in patients.

Our hope is to identify circuits in the brain that can be rapidly activated to recover motivational control over reward-related behavior, much like hunger or satiety can quickly up- or down-regulate our motivation to seek and consume food.

MC: Research has demonstrated that the vagus nerve can regulate digestion via the brain. Your study demonstrates how. Can you summarize how your study addresses this question?

NK: We knew that the vagus nerve played a vital role in regulating the speed of the digestive tract. In previous work, we had also shown that non-invasively stimulating vagal afferents at the ear can reduce the frequency of the pacemaker cells of the stomach. These gastric myoelectric signals can be recorded using electrogastrography, a classical method that is conceptually similar to an ECG, but for the stomach. The mechanism that adjusts the speed of the digestive tracts is known as the vago-vagal reflex because it is modulated via the brainstem, a small part of the brain that is directly innervated by vagal afferents.

However, we did not fully understand whether vagal stimulation leads to more widespread effects in subcortical or cortical regions of the brain that are involved in higher-order cognitive functions, including goal-directed behavior. We were interested in potential modulatory effects of transcutaneous vagus nerve stimulation (tVNS) on the so-called gastric network. This recently discovered brain network is phase-locked with the rhythm of the stomach. Analyzing phase synchrony, or “coupling”, is a typical way to study communication between regions and networks in neuroscience.

In our new study, we combined non-invasive stimulation of vagal afferents with concurrent brain imaging and recordings of the electrogastrogram, which is technically very demanding. This novel combination of acute brain stimulation with non-invasive recordings of the stomach and the brain allowed us to show – for the first time in humans – that stimulation of the vagus nerve increases the coupling between the stomach and the brain.

MC: You found that vagus nerve stimulation has modulatory effects on stomach–brain coupling in several regions of the brain. Can you discuss these regions and their importance?

NK: These findings help us to connect different strands of research into a neuroanatomical model of how energy metabolism is implemented in the brain. Firstly, it demonstrates that the recently discovered gastric network is sensitive to neuromodulatory input via the vagus nerve, indicating that it may play an important role in metabolic sensing including subjective sensations of hunger versus satiety. This interpretation is also supported by stimulation-induced changes in correlations with subjective ratings of hunger and satiety that we collected before and after the scans.

Second, it helps us better understand the functional role of vagal afferents in the adaptive control of behavior. If vagus nerve stimulation increases the coupling between the stomach and the brain, we would expect that this would increase the relevance of metabolic states for behavior and recent data from additional experiments supports this interpretation.

Third, we know that several disorders are characterized by a reduced sensing of bodily (interoceptive) signals. If we have a non-invasive method that can increase the communication between signals of the digestive tract and the brain, it might be possible to treat these disorders more effectively. We are following up on this idea in a new study in patients with major depressive disorder (MDD), who often suffer from somatic symptoms such as gastrointestinal problems.

MC: You are conducting further research into a possible application of stimulation for depression. Can you discuss why, and are you able to talk about any updates with this research?

NK: Although we think of depression as a mental disorder, it is striking to see how many symptoms are related to altered bodily sensations, specifically if it is a more severe episode of depression. Unfortunately, first-line treatments for depression often do not improve motivational or somatic symptoms as much as they improve mood and anxiety, and it takes weeks or months before substantial anti-depressive effects arise.

This delay may lead to long periods without improvements for non-responders to the first line of treatments. Therefore, there is a huge unmet demand for mechanistic treatments that can lead to more rapid improvements in key symptoms of depression. We are currently running two studies that include patients with MDD, where we try to emulate motivational signals from the gut using either administration of ghrelin, a neuropeptide that is synthesized in the stomach, or vagus nerve stimulation. We are positive that the first insights from those studies can be published in late 2023 and hope that this may open new avenues for treatments.

MC: What are your hopes for the future of your work?

NK: I believe that we are well equipped with very powerful mechanisms to regulate our motivation according to current demands. For example, most of us can resist the temptation of our favorite food, even if it placed right in front of us, given that we are sated, and not hungry. Also, in healthy people, metabolic feedback is quick, and we will stop eating once our homeostatic demands are approximately met.

From a therapeutic point of view, this seems to be the perfect endogenous system to guide motivation if we can help people regain control over their reward-related behavior using targeted neuromodulation. The role of the gut in the adaptive control of behavior has been neglected for a long time and I am optimistic that the recent surge of interest will lead to the necessary investments in clinical research so that we can develop novel approaches that capitalize on our body’s own feedback circuit.

Complete the form below to unlock access to this Audio Article: "How Does Vagus Nerve Stimulation Impact the Gut–Brain Axis? "