Complete the form below and we will email you a PDF version of "Imaging Nerve Cell Function: All-Optical Neurophysiology"

The microscope is one of the most iconic symbols of science, at least the equal of the white coat or bubbling neon liquids in its ability to endow scientific credibility in the eyes of TV viewers of shows like the Big Bang Theory or CSI: Miami. Yet the kinds of microscopes that most people imagine represent old-school microscopy in terms of both their technology and their impact in modern research. The new school, on the other hand, employs lasers and genetic engineering to probe ever deeper into cellular function.

Over the last 30 years light microscopy has been the subject of continual innovation that has dramatically changed microscope design and capability and, as a result, their prominence in biological research. This is particularly true in the field of neuroscience where visualising the intricate and diverse types and shapes of neurons demands both specific labelling and high-resolution imaging. In fact, it was the desire to view neuronal “wiring” in three dimensions that motivated Marvin Minsky to theorize and build the first confocal microscope in the sixties. Already a paradigm shift away from the old-school; confocal microscopes of the time used narrow light beams instead of full-field illumination to repeatedly scan over biological samples.

This focussed illumination, combined with a pinhole aperture placed in front of the photon detector enabled early confocal microscopy to exclude background light originating outside the plane of interest, thus granting a large increase in contrast which allows for better visualisation of neurons. It was not until the eighties that confocal microscopy saw widespread adoption by the scientific community. Helped by the substitution of reflected light with precise laser beams to illuminate biological samples, confocal microscopy granted further improvements in resolution and the high intensity illumination necessary to easily obtain fluorescent images. 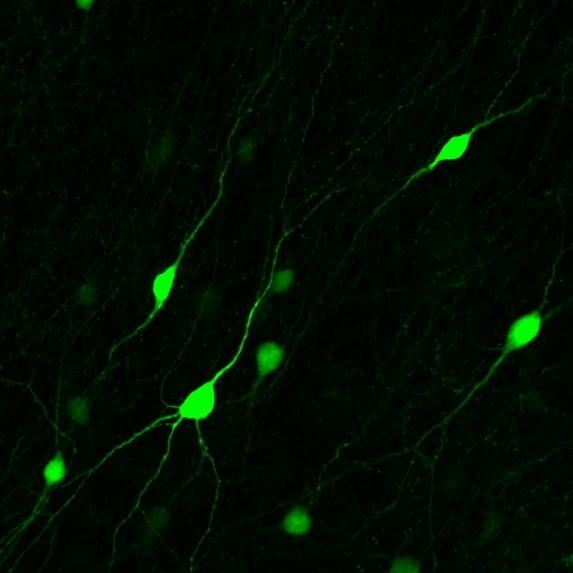 The benefit of all types of fluorescence microscopy is that, unlike conventional light microscopy, the fluorescent molecules which compose the image can be targeted to specific features of a cell to highlight it, such as the plasma membrane or nucleus. Since these are the only things in the sample that fluoresce, we can see them, even when surrounded by non-fluorescent tissue. Figure 1 shows inhibitory interneurons in mouse brain tissue. These cells are genetically engineered to produce the fluorescent molecule Green Fluorescence Protein (GFP) intracellularly, causing whole cells to glow green. The fine structures of individual neurons, such as their axons can be traced despite being sandwiched by tissue.

The combination of confocal microscopy with digital cameras for image acquisition and the discovery of fluorescent proteins like GFP (Figure 1) turned microscopy from a qualitative to a highly quantitative tool. GFP made it possible to infect cells with genetic material that produces fluorescent versions of a specific proteins and so track where they go within the cell. By doing the same with proteins that enable communication between neurons, the discovery of bio-compatible fluorescent molecules paved the way for engineered sensors capable of fluorescing only when neurons are communicating with each other.  Making it easy to see which neurons are active and when.

Communication between neurons consists of an electrical charge which accumulates at one end of the neuron and rapidly traverses the fine cellular processes of the neuron, namely its dendrites and axon. This rapid movement of charge is called the action potential, when it arrives at a synaptic terminal it triggers the release of chemical messengers into the synaptic cleft, the tiny junction between communicating cells. Release of packets of chemical messenger molecules into the cleft requires an influx of calcium ions into the synaptic terminals. This inward movement of calcium ions can be viewed as a kind of smoking gun for synaptic transmission.

By knowing a great deal about the cellular mechanics of both action potential generation and synaptic transmission scientists have been able to modify proteins from nature that are already involved in neuronal communication. With a little genetic tweaking, these proteins can be attached to fluorescent molecules in such a way that light is only emitted from neurons during either a local increase in calcium concentration or a change in their electric charge which would result from synaptic transmission or action potential firing respectively.

Being able to simultaneously image the electrical and chemical activity of multiple connected neurons is a dream of neuroscientists as it would allow them to link morphology with function when studying neuronal networks. When it is achieved, direct visualisation of neuronal communication will grant huge insights into how such networks respond to stimuli, process information and ultimately allow us to visualise how our brain's work.

Genetically encoded calcium indicators (GECIs) have seen widespread use in neuroscience particularly in studying sensory systems. In a typical experiment a researcher may record the intensity of a fluorescent pulse over time from a single synapse to measure how that synapse communicates. Thus, allowing that neuroscientist to watch neuronal communication as it happens, through the lenses of a microscope.

In this way GECIs report the strength and frequency of a neurons output from a synapse, but tell us nothing about the activity that is driving the neuron to communicate with its neighbours in the first place.

To get a complete picture of how neurons process incoming synaptic inputs and respond, or not, a sensor of the electrical component is needed, a genetically encoded voltage indicator (GEVI).

Since the 1940’s the gold standard procedure for recording the electrical activity of neurons has been to put electrodes into brains or attach them to single neurons. These two approaches measure either the combined electrical activity of groups of neurons that are close to the electrode, or the extremely precise electrical changes of a single neuron. Neither case is optimal as you either generalise clusters of neurons to single “units” or you attempt to understand the entire brain one neuron at a time, and there’s over 86 billion of them. The potential of GEVIs lies in their ability to visually report the electrical activity of neurons allowing researchers to discern the responses of individual neurons within a network of active neurons and so visualise their electrical conversations. Due to their ability to fluoresce even during small changes in the electrical potential of the cell's membrane, and thus report synaptic voltage changes, GEVIs are therefore great indicators of the inputs feeding into a neuron.

Read more: The future of electrophysiology

What opportunities does this bring to researchers?

If researchers could engineer neurons to produce both a GECI and a GEVI simultaneously they would be able to see which synapses stimulating any given neuron are causing it to fire, or how many sub-threshold inputs from synapses are integrated by that neuron before firing an action potential. The potential for understanding this complex form of neuronal computation is huge, opening up the opportunity to test many of the existing theories on how dendrites integrate incoming inputs. 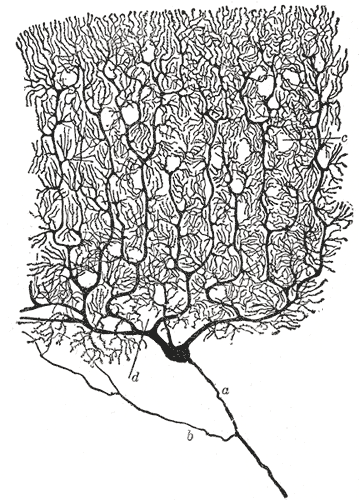 An ideal place to perform these types of experiments would be in Purkinje cells of the cerebellum (Fig 2), which are noted for their organisational structure, such that their dendrites are all in the same plane. This structure facilitated Ramón y Cajal's drawing of them with his 'old-school' microscope and golgi stain at the turn of the 19th Centutry.

Tracing the functional connectivity of neurons just as Marvin Minsky envisioned in the 60's is now looking attainable with combined GEVI and GECI technology. High throughput mapping of the functional connectivity of brain areas could be achieved simply by stimulating a single neuron with an electrode and looking to see which synapses surrounding the neuron light up with fluorescence from the GEVI. The added benefit here is that the success of synaptic communication can be assessed by looking for GECI signals in the axon terminals of neurons responding to the electrode pulse thus identifying neighbours with a strong synaptic connection.

Light on the horizon

Using light instead of electrodes is non-invasive, high-throughput and represents the successor to traditional electrophysiology. Small wonder then that the development of new GEVIs is being actively explored by many research groups. This competition is needed, as current GEVIs suffer from several drawbacks including low fluorescence emission in response to small voltage changes and poor sub-cellular localization. Once GEVIs are perfected it will still be challenging to image multiple neurons with sufficient frame rates to capture the propagation of electrical activity through them. Overcoming these challenges will still be beneficial for researchers, and GEVIs and GECIs, combined with light-activatable proteins, will form the toolbox of the emerging field of Optophysiology.

For a more detailed look at the applications of GEVIs and GECIs in modern research:

For a paper using both GEVIs and GECIs to study visual processing:

For an overview of recent innovation in microscopy: