Investigating the Synaptic Organization of Visual Space: Which Synapse Saw What?

Investigating the Synaptic Organization of Visual Space: Which Synapse Saw What?

Complete the form below and we will email you a PDF version of "Investigating the Synaptic Organization of Visual Space: Which Synapse Saw What?"

Complete the form below to unlock access to this Audio Article: "Investigating the Synaptic Organization of Visual Space: Which Synapse Saw What?"

Understanding how our brains interpret and process the visual scene has been a matter of intense neuroscientific endeavor since the pioneering work of Hubel and Wiesel in the early 1950’s. They implanted electrodes in the visual cortex of cats, the area of the brain that responds to visual information, and displayed images to the animals. This allowed them to eavesdrop on the neurons by listening for cells that fired in response to the visual stimuli as ‘snaps’, ‘crackles’ and ‘pops’ on their amplifier.

Now, pioneering work from Professor Sonja Hofer’s lab at the Biozentrum, University of Basel, has determined the organization of excitatory synaptic inputs responding to different locations in the visual scene. They achieved this by zooming down to measure the activity of the individual spines which protrude from dendrites, the branches of neurons that receive incoming synaptic information. Their findings mapped the spatial receptive fields in dendritic spines of mouse visual cortex neurons using two-photon calcium imaging.

Pyramidal neurons in the visual cortex respond to specific attributes of a visual scene or stimuli, such as contour orientations like the leading edge of the light bar in Hubel and Wiesel’s studies described above, or the words on your screen as you read this article. Each neuron responds to this information in a small area of visual space, this area is known as its receptive field.

Pyramidal neurons receive thousands of synaptic inputs onto their tree-like dendrites, but how these synaptic inputs influence the neuron’s activity to contribute to understanding the visual scene remains to be understood. For example, what does the wiring diagram of the cells in the visual cortex look like? Are there rules that govern how these thousands of synapses are arranged on the dendrites of the pyramidal cells?

The Hofer lab set out to investigate the connectional logic between neurons in the visual cortex.

As Sonja states, “If we want to figure out how the brain works, we have to understand how the neurons in the brain are connected with each other.” Adding, “We wanted to find out what information neurons with specific functions receive from the visual scene through their synaptic inputs, and how these inputs are arranged on their dendritic tree. By understanding these factors, we can start to interpret the rules that govern connectivity in cortical circuits.”

By expressing a reporter molecule that fluoresces when the cell is active in the pyramidal neurons of the primary visual cortex, the researchers could directly see and image neuronal activity. The molecule known as GCamp6 rapidly changes its shape as the cell is activated, making it fluoresce. Using a 2-photon laser, the scientists could target specific GCamp6 expressing neurons and their thin dendrites buried in the visual cortex, and record their activity as changes in fluorescence over long periods of time. Using this method, the scientists observed how individual dendritic spines responded to visual stimuli.

Zooming in on spines

Sonja explains the relevance of this finding, “Our data show that synaptic inputs onto pyramidal cells in the visual cortex tend to cluster over shorter dendritic distances if they respond to similar visual features that occupy similar regions in visual space.”

She goes on to explain the importance of this finding to the field of visual neuroscience, “Many visual neuroscientists still think that the most important characteristic of a neuron in the visual cortex is which orientation of a bar or an edge it prefers. We show that it is the detailed visual feature the neurons best respond to that determines how these synaptic inputs are organized, and not their orientation preference.”

This clustering arrangement of synaptic inputs on a dendrite makes sense. Inputs that are activated in response to the same feature in a visual scene will more likely induce a response in their neuron if they are active on the same dendrite at the same time.

The Hofer group also investigated the arrangement of synapses on dendrites in relation to the receptive field of these inputs. They show that inputs from neurons representing similar, nearby visual features in the visual space were more likely to terminate on dendrite branches closer to the cell body.

Interestingly, the researchers revealed that about 30% of the synaptic inputs to the pyramidal neurons still came from distant cells, but these terminated on dendritic branches further away from the cell bodies.

These long-range inputs still activated spines, but only if the neurons from which they originated responded to features in the environment that were aligned 'co-axially', a geometric term meaning the feature shares a common axis, to that of the postsynaptic cell.

Together this means that, if you were looking at a long horizontal line like the edge of the wall in the figure below, the image would cross the receptive fields of many cells in your visual cortex that have the same orientation selectivity. Those cells that picked out similar features in the visual scene to those in the receptive field of the purple neuron (dashed purple circle) will also innervate it. This means the blue cell with the overlapping receptive field (dashed blue circle) that also picked out the horizontal edge of the wall would reciprocally excite the purple cell. And the distant green cell (green dashed circle) whose receptive field is also crossed by the wall edge would also excite the purple neuron, albeit synapsing at a more distant location to the blue cell. The orange cell would not signal to the purple neuron because its receptive field does not pick up any similar features. This connectivity enables us to quickly interpret the wall edge as a single long-line across our visual field. 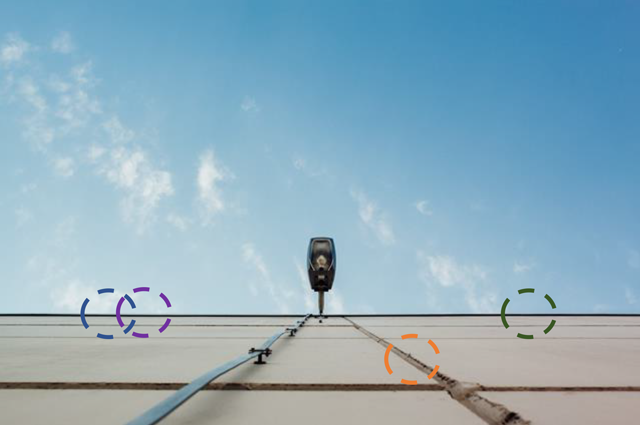 Receptive fields (dashed circles) of neurons in the visual cortex pick out different features of the visual scene.

Visual neuroscientists have known of the long-ranging connections between pyramidal neurons in the visual cortex for a long time, but could only postulate on their importance. By demonstrating that long-ranging neurons pick out similar features in the visual scene and connect to each other represents a significant finding and a big step forward for the field of visual neuroscience.

Seeing: into the future

New questions now arise, What’s the evolutionary purpose of these long-range projections? Do they enable us to quickly parse the visual scene of our environment? And, could this explain why our brains can be fooled into seeing edges that aren’t there? such as the blue triangle in the foreground of the optical illusion below. 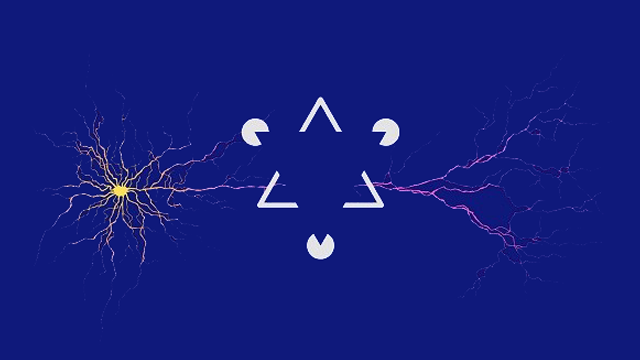 Gestalt phenomena illusion infront of a pyramidal neuron. Do you see a triangle that is not physically there? Credit: Biozentrum, University of Basel.

However, to fully understand how this arrangement of synapses influences the activity of a pyramidal neuron and then all pyramidal neurons in the visual cortex, the authors would need to visualize the activity of all the spines on all the dendrites of one cell. Unfortunately, this is currently impossible owing to technological limitations, as you would need to simultaneously zoom in on all spines on all dendrites within a large 3D area of brain tissue.

Despite this, the findings of this study do provide a revealing insight into the pattern of connectivity in neurons of the visual cortex and open-up a new-level of understanding from which to explore vision.